It’s been a while since we’ve been able to do ‘in real life’ show and tells for students attending the Library’s Doctoral Open Days so the Americas and Oceania Collections Curatorial team and Eccles team were delighted to be able to discuss a selection of items from the collections with researchers at the latest on-site sessions.

On 4 and 7 March 2022, a number of students from all disciplines visited the Library’s site at St Pancras to get better acquainted with the services and collections available for their research, inspiration and enjoyment. Theses practical sessions were offered to all who attended our PhD webinars that took place earlier in the year.

The days give the chance to attend Reader Registration appointments, go on building tours, take advantage of drop-in sessions with Reference Services, see how collection items are handled and conserved, and come along to show and tells with curatorial teams across the Library to see and discuss items from different collections. 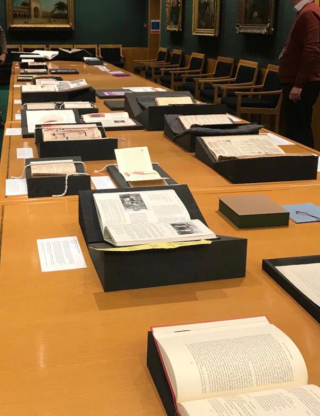 Asian and African Collections, British and European Collections, Music Collections, Digital Collections and Resources, Contemporary Society and Culture Collections, and Maps and Visual Arts Collections all took part. We love being part of these days; not only do we get to meet new researchers and discuss their work, but we also get the chance to see colleagues from other collection areas and chat with them about the items in their remit and beyond – both things that have been much-missed in-person activities over the past two years.

For those unable to attend, we thought we’d share a few things with you digitally instead! Here are a selection of items that the Americas and Oceania team displayed over the two days: 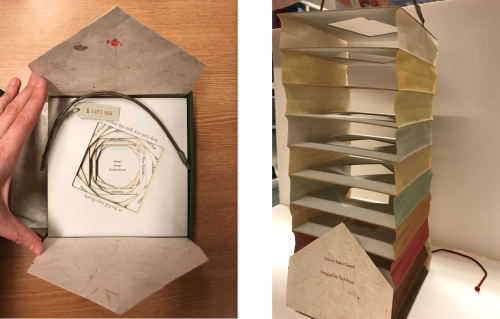 Photos of down the rabbit hole (RF.2019.a.126) by Tara Bryan, showing the item as it’s stored and in its open form

Lewis Carroll’s original manuscript for Alice's Adventures Under Ground is housed at the British Library, so we are always excited to see how the tale has been re-imagined, re-interpreted and re-illustrated over the last 160 years. This item invites readers into the rabbit hole, with the words from Carroll tunnelling down and down… just as Alice did. This artists’ book was designed by Tara Bryan in her studio in Newfoundland. One of only 40 copies, it is made from delicate handmade Thai Bamboo paper and Japanese paper. 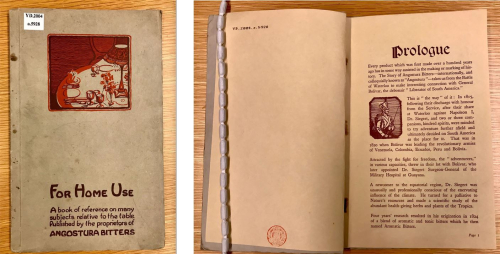 This item speaks to culinary social history, especially concerning those deemed belonging to the middle and upper classes of Trinidad and Tobago. ‘Invaluable to the Host and Hostess’, this book of recipes by the makers of Angostura Bitters, is an example of great marketing from a bygone era. 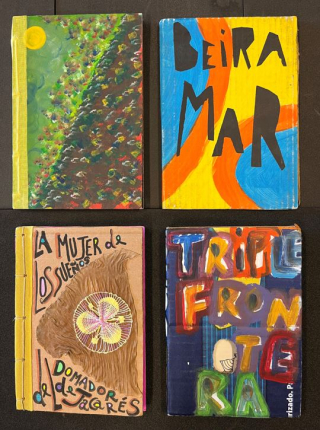 Cartoneras are books of poetry, literature, and translations made with covers from salvaged cardboard with original illustrations in acrylic colours made by members of cartonera workshops. Their illustrated cardboard covers are often anonymous, even when created by famous artists, or signed by all members of the publishing group in a clear attempt to promote the community effort over the individual artist. The focus is on making books together and giving everyone access to reading and writing their stories.

Cartonera books are not only visually beautiful, but also make a critical intervention in publishing and reading cultures in Latin America starting in the wake of the financial crisis in Argentina with Eloísa Cartonera in 2003. This type of cheap community publishing spread quickly across the region and allowed other Latin American countries plagued by economic and social inequality to appropriate reading and book-making practices creatively and in a community-based way. 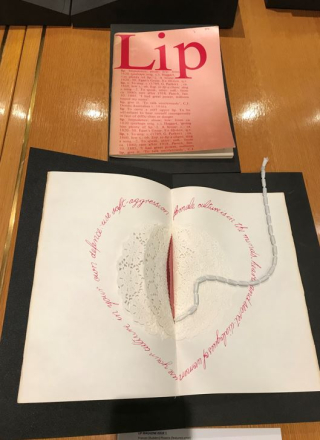 Lip was an Australian feminist journal self-published by a collective of women in Melbourne between 1976 and 1984. The art and politics expressed in the journal provide a fascinating record of the Women’s Liberation era in Australia. The inaugural issue seen here includes articles on writer Dorothy Hewett, Australian embroidery, and Australian feminist art, film and performing arts, as well as a double page removable centerfold: a doily vulva artwork called ‘Soft Aggression’ by artist Frances (Budden) Phoenix. Phoenix was an Australian feminist artist who helped to establish the Women’s Domestic Needlework Group, and known for her provocative textile and needlework which subverted traditional notions of women’s domestic crafts. In her centerfold here, she revisits the tradition of women inscribing messages into their work and includes the directive to readers: “female culture is in the minds, hearts and secret dialogues of women. Use your culture in your own defence: use soft aggression.”

In 1962, scholar Philip P. Mason collected and republished the entirety of the manuscript magazine The Literary Voyager. Originally produced between December 1826 and April 1827 by Henry Rowe Schoolcraft, it is considered to be the first periodical related to Native American culture. Its alternative title, Muzzeniegun is Ojibwe for ‘book’.

Schoolcraft, an ethnologist and Indian Agent in Sault Ste. Marie, Michigan, handwrote a few copies of each issue which were posted to friends and family. Schoolcraft was married to Bamewawagezhikaquay, also known as Jane Johnston Schoolcraft, who was of Ojibwa and Scots-Irish ancestry. She is considered to be the first known Native American woman writer. Notably she wrote in both English and Ojibwe. Many of her poems and traditional stories were included in The Literary Voyager, however she does not receive credit for her work. Her mother, from whom Schoolcraft also collected traditional stories and cultural knowledge, is also not named. It has taken considerable efforts by Native American literary scholars to correct this historical omission, and to bring attention to this important Ojibwe voice.

Some of Bamewawagezhikaquay’s stories were later published in Algic Researches, also compiled by Henry Rowe Schoolcraft. This Library copy is an original edition from 1839. 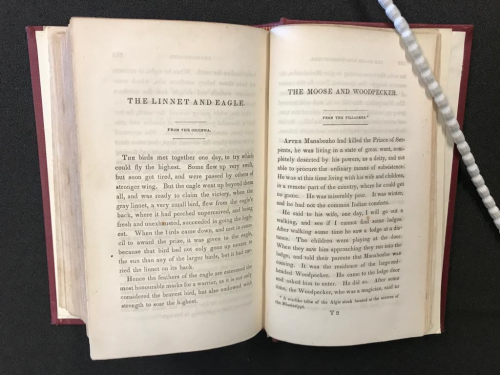 We’d like to thank our colleagues in the Library’s Research Development Team for organising the webinars and in-person sessions, and to our friends in the Eccles Centre for American Studies for their support in helping the days run smoothly.

As the Library continues to working hard at both our sites to make sure everyone can visit us safely, we are looking forward to the opportunity to run similar sessions and meet more of you in person over the coming year.