Diederik Oostdijk is Professor of English and American Literature at Vrije Universiteit Amsterdam and was a 2021 Eccles Centre Visiting Fellow at the British Library.

The British Library is an excellent place to do cross-media research. During my research stint, I intended to study the working relationship between poets and visual artists, especially Ted Hughes (1930-1998) and Leonard Baskin (1922-2000). As a consequence, I spent most of my time in the Manuscripts Reading Room where papers of both are held. In addition to finding many relevant letters and manuscript drafts that reveal how the English poet and American artist collaborated, I found plenty of doodles and drawings that showed the genesis of several books on which the two worked together. The detailed finding aids on the British Library website often describe these, but they cannot do justice to the experience of seeing this visual material in person. In order to take photographs or have scans made, it is necessary to acquire permission from the copyright holders, so it is advisable to seek this before making the trip to the British Library. It is much more of an ordeal to do that after visiting.

The British Library’s holdings of fine press materials was equally relevant for my research, but to check these out I needed to go one floor down, to the Rare Books & Music Reading Room.1 Hughes and Baskin collaborated on many books that were published by their own publishers, Eremite Press and Gehenna Press, respectively. The leather bindings containing the richly illustrated books printed on handmade paper are sights to behold. Some of the fine presses were short lived and have remained obscure, but they often presented young authors with their first opportunity to publish, or gave established writers the chance to try out new approaches for their work. It allowed Hughes, for instance, to express his grief about Assia Wevill and Sylvia Plath in poems hidden in limited and sumptuously designed editions, years before this became public knowledge with his more public Birthday Letters, which he issued through a commercial publisher.

In a different corner of the same reading room, I listened to many interviews with poets, painters and photographers. These recordings are not accessible from outside the British Library, but through a few desktop computers of the Rare Books & Music Reading Room. They include radio recordings, footage made at and by the British Library, and assorted other tapes that were digitized. I was able to listen to dozens of digitized cassette tapes that Ian Hamilton recorded for his biography of the American poet Robert Lowell (1917-1977). He only used a tiny fraction of these interviews for his book. This raw material will undoubtedly give researchers new leads, insights, and ideas, as Hamilton could obviously not pursue all angles, and there are always unexpected pronouncements in these interviews that are waiting to be explored further. Not all links that I clicked on worked, but the reference staff encouraged me to fill out forms when that occurred, so that they could help repair the broken links.

The physical papers of the Ian Hamilton collection are still largely unprocessed, and so not readily accessible. Yet the curators are interested in making portions of them available if scholars can specify what exactly they are looking for. I was lucky to be able to peruse some transcripts of interviews and some correspondence from that collection that are not yet detailed in finding aids, but that I can now use for my research. The joy of searching through boxes and folders of unsorted material is the distinct pleasure of being like a kid in a candy store. Every time you open a folder or box you don’t know what it will contain, and I discovered nuggets that I know will become part of articles or essays that I will write down the line. I was allowed to look at these unsorted papers in the Maps Reading Room, yet another reading room that I could add to my tally at the British Library.

My favorite research experience was looking at Fay Godwin’s contact sheets and photographs in the Visual Arts Reading Room. Tucked away in the much larger Asian and African one, this tiny reading room is only open from 10.30am to 12.30pm on Tuesdays and Thursdays, and you need to make an appointment before going there. Godwin (1931-2005) was an English photographer who collaborated with Hughes on a book, Remains of Elmet, about the area of Yorkshire where Hughes grew up. Godwin, however, also took photographs of many poets and writers, including of Lowell. The contact sheets and developed prints held in the Visual Arts Reading Room allow one to retrace the photographer’s steps. The sequence of shots helps you to see how she conceived of several images, and decided which one to single out to develop as a photograph. Godwin clearly wanted to showcase chess pieces in her photograph of Robert Lowell, for instance, when she visited him and his wife Caroline Blackwood at Milgate House in Kent in 1971. He stares intently and bemused into her camera, and as viewers we are interested in observing the next move in his life, and also Godwin’s next move as photographer. 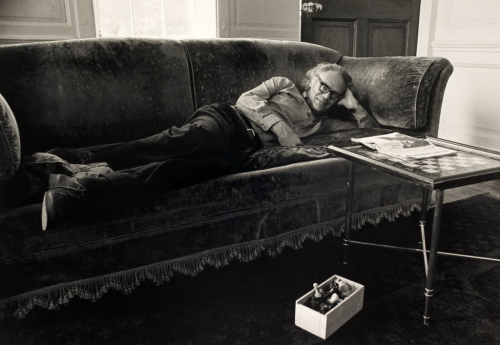 The limited access time and spacing in the Visual Arts Reading Room made me value the opportunity and experience of viewing this unique visual material even more. Like visiting the other reading rooms, it deepened my interest into how poets and visual artists collaborated together. To make the most of your research time at the British Library, it is surely important to plan ahead, but also to allow for chance to occur. Allow some time to wander around, and to inspect some of the other reading rooms that you were not intending to visit. You never know what you will find.

1.  A guide to the British Library's post-1945 US fine press holdings may be found here (fourth item down).