E-Resources on European Colonization in the Americas to c.1650

In the latest of our blogs on digital resources for Americas Studies, the Eccles Centre's Philip Abraham looks at the early period of European contact and invasion of the Americas. Remember, once you have your Reader Pass a number of these e-resources can be accessed remotely, from the comfort of your own home.

The emergence of what many scholars now think of as Vast Early America during the early modern period is one of the central pivots of global history. [1] The emergence of an Atlantic world during the two centuries after 1450 was a complex and truly transnational phenomenon, which involved the transfer and circulation (often violent and coerced) of peoples, plants, animals, goods and ideas between Europe, Africa and the Americas.

Because this moment involved so many different kinds of people and things scattered across three continents, it is also a subject that particularly benefits from the development of digital platforms. Digital technology allows researchers to bring together documents and sources from institutions and repositories from around the world in a way that was only possible for the most privileged researchers in the analogue age. These platforms often also include features like maps and infographics which help students and researchers to visualize the movements and voyages that are so fundamental to understanding these histories.

This blog is going to focus on some of the more specialized digital platforms and resources available through the British Library, but it is always worth remembering that some of the more general resources for the humanities (and early modern studies in particular) have a lot to offer. [2]

For building a bibliography, general resources that have been mentioned elsewhere, like the Hispanic American Periodicals Index, America: History & Life and the Bibliography of British and Irish History (which, despite the name, also covers the British Empire in North America and the Caribbean, and Britain's military, economic and diplomatic relations with Latin America) are indispensable starting points. These platforms rely on keywords searches, however, which is great if you have a fairly specific idea of what you are looking for, but less useful if you’re entering a subject for the first time and would like a bit more guidance. For those new to the subject, the best jumping off point for building a reading list are the annotated bibliographies in Atlantic History available through Oxford Bibliographies. Assembled by world-leading experts and covering 360 themes ranging from ‘African Retailers and Small Artisans’ to ‘Dreams and Dreaming’ in the Atlantic world, it is an eclectic but extremely inspiring way into the subject. 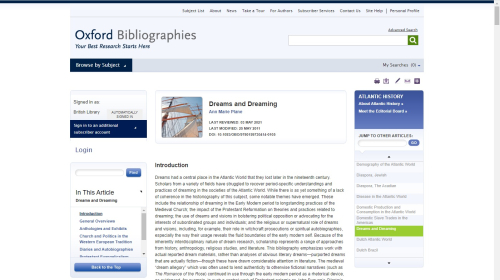 Again, many of the general platforms for early modern studies offer important pathways into the subject of Europe’s overseas expansion. Early English Books Online (which has a digitized copy of almost every book printed in the British Isles and North America before 1700) is invaluable if you are interested in the ideas that animated England’s engagement with the Atlantic, as you can retrieve texts like Richard Hakluyt’s foundational treatise, Principal Navigations, Voyages and Discoveries of the English Nation, at the click of a button.

The title page of the second edition (1598) of Richard Hakluyt's "Principal Navigations", as viewed through EEBO

EEBO (as those in the know call it!) is an amazing achievement but again, it rewards those that know what they are looking for. European Views of the Americas, 1493-1750 similarly does not easily facilitate browsing but is a really useful gateway into online primary sources for more experienced researchers. There are no comparable resources available through the British Library in languages other than English, however, so if you want to get a more pan-European, indeed pan-Atlantic, perspective, some of the specially curated platforms are very useful.

Its somewhat old-fashioned (indeed, some might say problematically euphemistic) title notwithstanding, Age of Exploration, c. 1420-1920 is a really dynamic and compelling way into the subject, and has a number of really useful features. It has hundreds of documents relating to Europe’s colonization of the Americas (as well as Europe’s colonization of other regions of the world, as it is not focused solely on the Atlantic), organized into collections and themes to make browsing much easier. A particularly useful feature are the interactive maps, which not only chart the routes taken by some of the most significant voyages of exploration during this period, but connects these to fascinating primary sources. For instance, the map plotting William Baffin’s second voyage (March – August 1616) in search of the fabled Northwest Passage connecting the Atlantic and Pacific Oceans links to a full digitization of his account of the journey and the log of the voyage. [3] 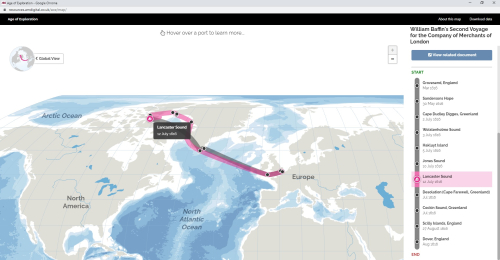 William Baffin's second voyage, as viewed on "Age of Exploration" 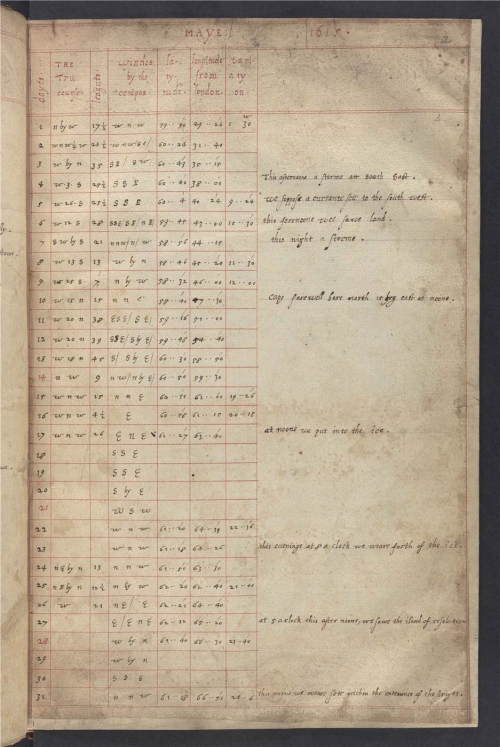 William Baffin's logbook for May 1615, as downloaded from "Age of Exploration"

Other documentary highlights include a digitized copy of Antonio de la Ascensión’s 220 page account of Sebastián Vizcaíno’s voyage along the coast of California in 1602-1603, and an equally long manuscript describing the conquistador Pedro de Valdivia’s subjugation of Chile in the 1540s.

Age of Exploration also features videos by leading scholars introducing a number of topics, as well as essays and biographies of several major white European men involved in the exploration and invasion of the Americas. Other curated platforms that similarly offer in-depth access to select primary sources together with helpful editorial or secondary interpretive material include Global Commodities: Trade, Exploration & Cultural Exchange, which uses datasets, documents and maps relating to 15 raw and manufactured goods such as fur, silver and gold, sugar and coffee as ways into global history. Empire Online covers the British Empire from a broad range of perspectives. Obviously, the African and Indigenous experiences need to be brought into view before a full picture of the emergence of the early modern Americas can be made, but these resources on European travel, war-making, trade and early settlement are a good starting point.

[1] This notion was developed by the Omohundro Institute of Early American History and Culture, and is very well articulated by former Director Karin Wulf here.

[2] This blog will not deal in depth with digital resources concerned with the Atlantic slave trade, or the Indigenous American experience of European colonization. Look out for blogs that will deal with these themes in the future.

[3] This happens to a British Library manuscript. William Baffin, True Relation of his Fourth Voyage for the discovery of a north-west passage, in the year 1615; preceded by the Log of the voyage, Add MS 12206.