The Revolution Will Be Sexualized

John G. McCurdy is Professor of History at Eastern Michigan State University, and was a 2021 Eccles Centre Visiting Fellow at the British Library.

What was it like for homosexual men in the era of the American Revolution? For the past few years, I have been trying to answer this question. Little has been written about same-sex intimacy in the eighteenth century and almost no one has attempted to connect homosexuality to the creation of the United States.

Specifically, I have been researching the case of British Lieutenant Robert Newburgh who was accused of buggery in 1774 and faced a court martial. Newburgh’s case (which I found at the William L. Clements Library at the University of Michigan and at the UK's National Archives at Kew) is highly detailed. It is full of homophobic stereotypes but also a stirring defense of sexual freedom that was centuries ahead of its time.

In February and March 2022, I was privileged to spend four weeks at the British Library thanks to the generous support of the Eccles Centre for American Studies. Although I had already located most of the materials related to Newburgh’s case, I needed to contextualize his trial. How typical was his court martial and how did it compare to contemporary British military legal actions? Also, how did people in the eighteenth-century Anglo Atlantic talk about same-sex intimacy? Fortunately, I found a great deal of information at the British Library!

I spent my first two weeks going through manuscripts. The Download Haldimand guide are an especially rich collection that I strongly encourage all researchers to take a look at. Frederick Haldimand was commander in chief of North America from 1773 to 1774 and governor general of Canada from 1778 to 1786. Accordingly, he collected all types of reports about life and events during the American War for Independence. Although Newburgh’s letters to Haldimand were the only ones to mention homosexuality, I found information on other courts martial, marriage and families, and unusual individuals who ran afoul of the British establishment.

There are many interesting stories that I found in Haldimand Papers. In 1781, Stephen Tuttle wrote to Haldimand asking for his help finding his wife. Apparently, Tuttle’s wife had “entertained” some American rebels and then run away with his money. I also found the court martial of Ensigns Archibald MacDonnell and Stephen Blackader for fighting with a Canadian colonist. The colonist—who was a French speaker—called the two officers “foutre” and “Bougre” (fucker and buggerer). Also in the Haldimand Papers, I located several letters from Rev. Thomas Charles Hessop Scott. Like Newburgh, Scott was an army chaplain who found himself on the outs with the officers. Although Scott was heterosexual, he was forced out of the army when he defended civilians against soldiers’ theft and criticized his commanding officer.

I also scoured the manuscripts for any mention of homosexuality. In the Harley Papers, I located transcriptions of late-seventeenth-century accounts such as “Jenny Cromwell’s Complaint against Sodomy” which condemns England for encouraging vice, as well as “Petition of Hassan a Turk” in which a Muslim asks King William III to set aside his execution for sodomy because of cultural differences. The Miscellaneous Papers and the Morley Papers include accounts of “macaroni”: a term applied to fashionable young men in the 1770s. Many writers lampooned the macaroni as queer, that is, either asexual or homosexual. Finally, the Sloane Papers contain accounts of John Atherton who introduced the sodomy law to Ireland and was also the first man to be executed under the law. 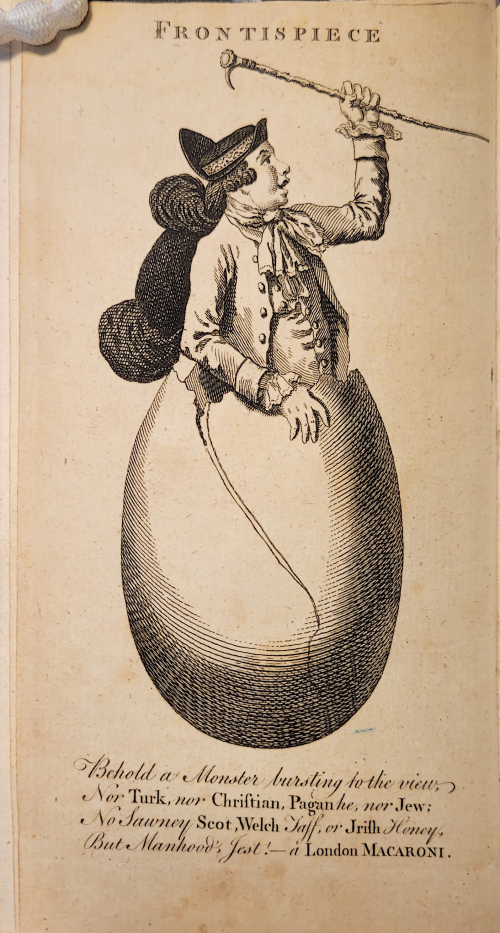 In my third week at the British Library, I moved on to the Rare Books and Music room. I quickly discovered many pamphlets, plays, and books that discussed homosexuality. Not surprisingly, most portrayals were negative and mocking. Satan’s Harvest Home from 1749 fretted over the preponderance of “vile Catamites” (a classical reference to homosexuals), which it blamed on the current fashion of “Men kissing each other.” This pamphlet also contains one of the few references to lesbianism, which the author terms “the Game of Flatts.” I also found sermons against sodomy, the play The Macaroni: A Comedy, and attacks on Samuel Foote who was accused of having sex with another man. 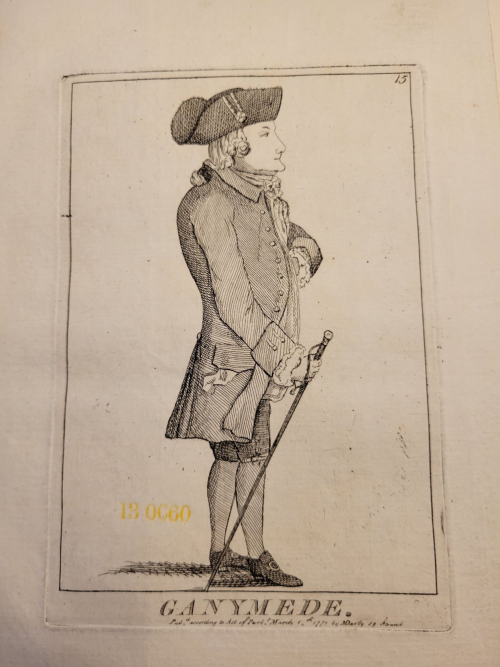 Yet not all of the accounts are entirely negative. I was delighted to find The State of the Case of Captain Jones from 1772, a pamphlet who urged that King George III to pardon a man who had been convicted of sex with another man. Although the author believed that sodomy was a capital crime, he nevertheless made an appeal for compassion and the rule of law over mob violence. I also found An Address from the Ladies from 1754, a mocking account of an Irish archbishop who fell from power over rumors that he had a male lover. Pretending to be letters between the two men, the correspondence made the case for an acceptance of homosexuality with classical allusions including: “You may read Virgil and there you’ll find he was one of us.”

Since returning to America, I have been sorting through my findings. These will greatly enrich my findings and will certainly appear in my forthcoming book on Robert Newburgh and what his case can tell us about homosexuality in the American Revolution. I am grateful to the Eccles Centre and the British Library for giving me this wonderful opportunity.

Posted by jean.petrovic@bl.uk at 1:47 PM