Food and Freedom in 19th-Century Jamaica

Katey Castellano is Professor of English at James Madison University and was a 2020 Eccles Centre Visiting Fellow at the British Library.

During my Eccles Fellowship at the British Library in March and April 2022, I researched the publications and perspectives of the Black Romantic-era writer, Robert Wedderburn (1762-1835/36). Wedderburn was born enslaved in Jamaica, and as a young man he migrated to London, where he became involved in London’s ultraradical circles. My research suggests that, even though he was publishing in London, Wedderburn’s political theories grow out of his experiences of being raised by his enslaved mother, Rosanna, and his grandmother, Talkee Amy. His writing importantly provides a rare glimpse into what Vincent Brown describes as an “oppositional political history taught and learned on Jamaican plantations—a radical pedagogy of the enslaved.”1 Wedderburn’s publications challenge the abolitionist narrative that liberal, individualist freedoms should be spread from England to the West Indies. Instead, Wedderburn instructs his white, lower-class readers in London about already existing African-Jamaican practices of land and food reclamation.2 In other words, Wedderburn’s abolitionist pedagogy insists that food and freedom are inseparable. 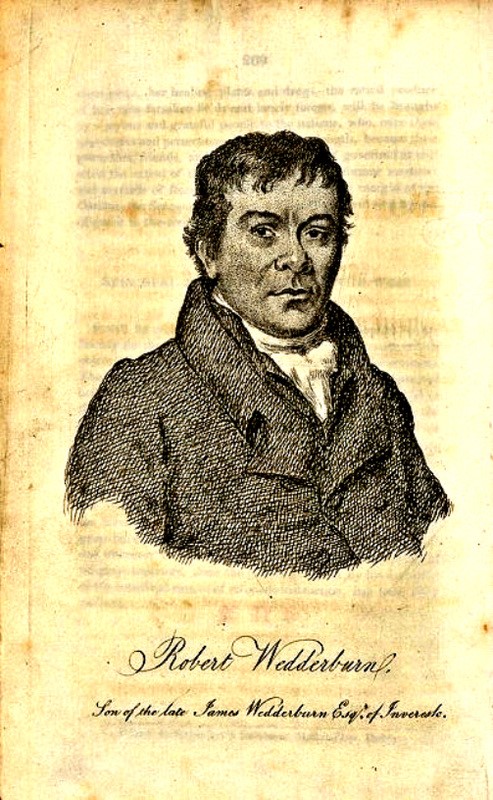 The British Library holds one of two remaining copies of Wedderburn’s The Axe Laid to the Root, or a Fatal Blow to Oppressors, Being an Address to the Planters and Negroes of the Island of Jamaica (1817). An inexpensive weekly periodical for working-class readers, Axe Laid to the Root’s six issues disseminate a vision of abolition that opposes private property, both in people and land, because access to land for growing food is necessary for freedom from the plantation system. Wedderburn declares, “Above all, mind and keep possession of the land you now possess as slaves; for without that, freedom is not worth possessing; for if you once give up the possession of your lands, your oppressors will have power to starve you to death.”3 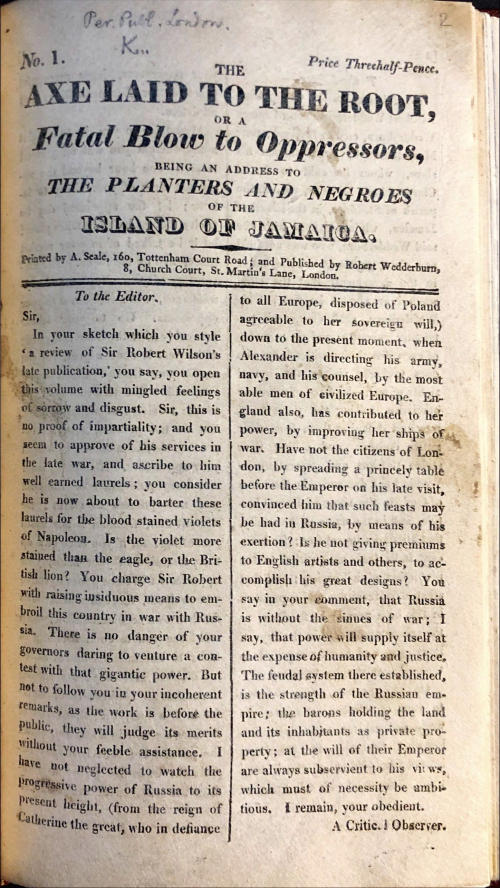 When Wedderburn admonishes enslaved people in Jamaica to “keep possession of the land,” he is referring to the provision grounds, land distributed by enslavers for enslaved people to grow their own food. Access to this land allowed enslaved people to cultivate kinships and culture around growing and eating yams, sweet potatoes, cassava, taro, and other vegetables. Sylvia Wynter argues, “Around the growing of yam, of food for survival” enslaved laborers in Jamaica “created on the plot a folk culture—the basis of a social order.”4 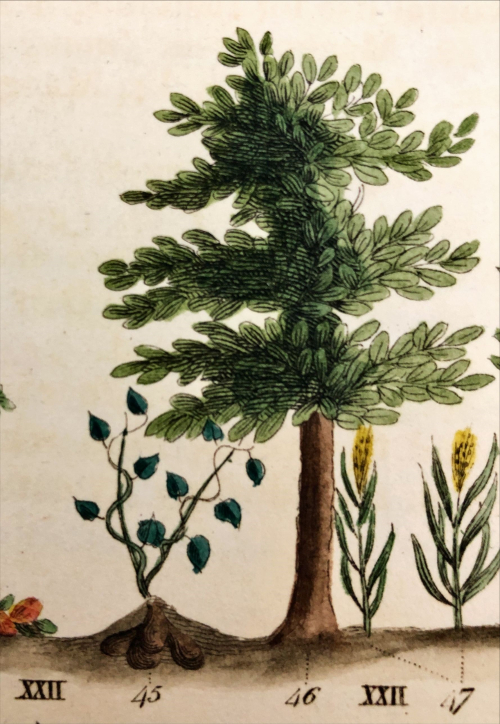 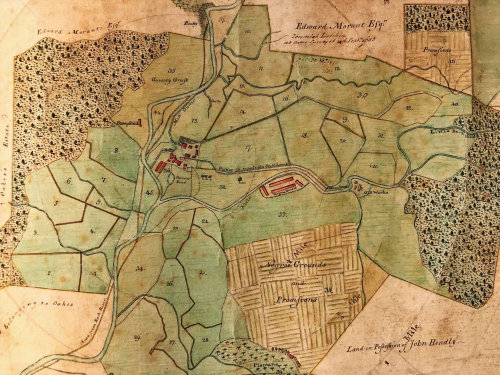 Guided by Wedderburn’s theory that abolition requires access to land and food, I explored other colonial texts at the British Library that describe the provision grounds. Matthew Lewis is best known as the author of the popular gothic novel The Monk (1796), yet while at the British Library I studied his Journal of a West India Proprietor, which was written from 1815 to 1818. The journal records two visits to inherited plantations in Jamaica. As Lewis attempts to ameliorate the conditions of enslaved people, the provision grounds become a point of contentious negotiation. By the middle of his first visit, the people that Lewis enslaved had negotiated increased freedom to visit their provision grounds: “I therefore granted them as a matter of right, and of which no person should deprive them on any account whatever, every Saturday to cultivate their grounds.”5 Throughout his journal, Lewis vacillates between his anxiety about the independence cultivated by the provision grounds and his desire to be a hero in facilitating access to them. Provision grounds finally provoke a crisis within the idea of the people as property: if people are property, how can they have rights to the land? Enslaved people bequeathed provision grounds to their kin and earned money from selling excess produce, but, legally, enslaved people were themselves property. By cultivating independent food production on the provision grounds, then, the seeds of freedom had been sown before Emancipation. 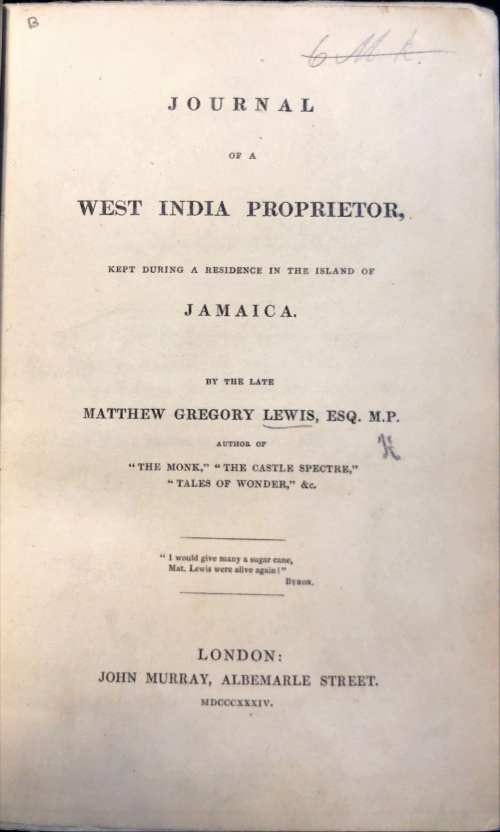 The radical nature of the provision grounds emerges even more clearly during Emancipation (1834), when the provision grounds became openly contested spaces. In the Holland House Papers, an estate manager, Thomas MacNeil, complained to Lord Holland that formerly enslaved people “have withheld so much labour from the estate” while at the same time “they have devoted much labour to improve their cottages, and increase the extent of their provision lands.” Holland wants formerly enslaved labourers to cultivate sugar cane and pay rent for their land, but MacNeil reports, “They declare they will not pay any rents whatever until they see ‘the Queen's Law’ to say they must do so, that their parents before them, had possession of the land and had houses where theirs now are, before Lady Holland was born and that they cannot think of paying any rent whatever and work for the estate also.”⁠6 MacNeil’s letter indicates that formerly enslaved people “cannot think” of paying rent after emancipation because they understood freedom as the right to possess the provision grounds as an intergenerational inheritance. The formerly enslaved people on Holland’s estate struggle to retain African-Jamaican land and food-based freedoms nearly identical to those advocated by Wedderburn: “Above all, mind and keep possession of the land you now possess as slaves; for without that, our freedom is not worth possessing.”

After Emancipation, formerly enslaved people in Jamaica resisted leaving or paying rent for their grounds. Both planters and antislavery activists wanted to detach African-Jamaicans from the land in order to force the formerly enslaved population into useful wage-labour for the British economy. Following Wedderburn’s argument that food and land are inseparable from freedom, I found evidence in planter journals and letters that African-Jamaican food systems challenged the plantation system during and after slavery.

For more information about African American foodways, see the interview with Jessica B. Harris, author of High on the Hog: A Culinary Journey from Africa to America (New York: Bloomsbury, 2011; British Library shelfmark DRT.ELD.DS.70649), at the British Library’s Food Season 2022.