Publishing in the Colonial Anglophone Caribbean: A New Guide to the British Library's Holdings

We are delighted to let you know that the Eccles Centre has just published its first Caribbean-focused bibliographic guide: Caribbean Publishing: A Selective Bibliography of British Library Holdings, 1800-1974, by Naomi Oppenheim.

Caribbean Publishing: A Selective Bibliography of British Library Holdings, 1800-1974 is the unexpected outcome of research conducted for my doctoral thesis, ‘“Writing the Wrongs”: Caribbean Publishing in Post-war Britain from a Historical Perspective’. This thesis uses publishing as a channel to explore socio-political transformations and the relationship between print and politics. The bibliography emerged from what I had initially assumed would be a quick research exercise in which I’d call up a selection of nineteenth and twentieth-century Caribbean publications in order to garner a sense of key publishers. It soon became a much more ambitious task!

In essence, I decided to go on a mission to locate everything in the British Library collections that was published in Barbados, British Guiana, Grenada, Jamaica and Trinidad and Tobago, between 1800 and their respective independences: 1966, 1970, 1974, 1962 and 1962, excluding Government Printing Office publications. This entailed creative navigations of the online catalogue, using a combination of territories, cities and date ranges.

Although the bibliography began as personal research endeavour for my thesis, doing a PhD Placement with the Eccles Centre at the British Library – where I worked on the Caribbean Foodways project – meant that I had time to continue working on it with guidance from the Centre’s staff and thus turn it into a public resource. By the end of the project, I had tracked down over 500 books, many of which I had called up and looked at, driven by the curiosity that a sparse catalogue record provokes.

I believe that books are vessels for producing knowledge about history, culture, politics and the nation. My interest in the Caribbean publishing landscape as a lens to understand societal and cultural shifts motivated me to create a detailed subject index for the bibliography: I wanted to know what types of books were being published, by who, and when. I divided this subject index into 11 categories – including Cultural, Economics, Geography and Space, History, Literature, Slavery, Travel and Tourism, and Religion – and I gave each of them multiple sub-categories. The index reveals that history texts, which were the most popular genre, account for a quarter of all books published between 1800 and 1974. Likewise, a quarter are literary - poetry, fiction, memoir, folktales and plays.

As well as aiding British Library users’ navigation of the Caribbean collection, this subject index also helps us to understand historiographical, literary and print trends. And there is
a list of more than 50 digitised items that are accessible from the comfort of your home, local library or school. 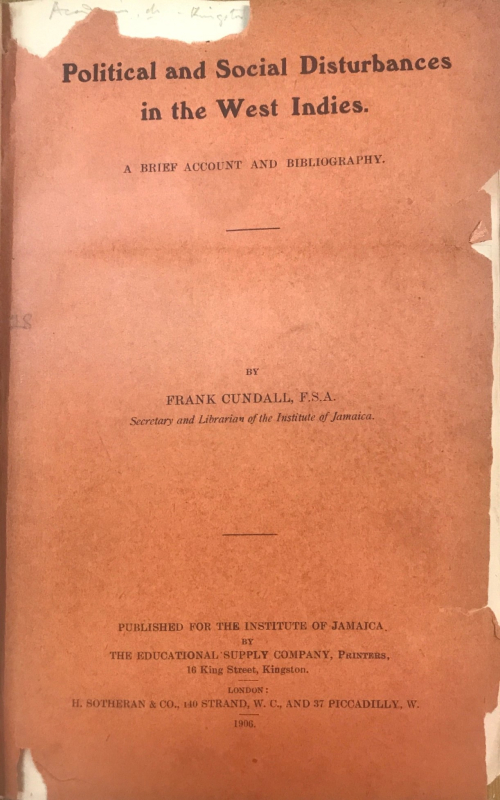 Publishing was hugely important in shaping ideas of the Caribbean through articulations of history, literature and vernacular language: whether it’s Frank Cundall’s prolific writing about Jamaican bibliography, biography and history, published by the Institute of Jamaica in the late nineteenth and early-twentieth centuries [Fig. 1], Claude McKay’s Songs of Jamaica (1915) [Fig. 2], or Eric Williams’ self-published Historical Background of Race-Relations in the Caribbean (1955).1 Published in Kingston in 1912 by Aston W. Gardner & Co., Songs of Jamaica is one of the earliest printed examples of Creole poetry. The introduction was written by Walter Jekyll, a planter who had a keen interest in collecting the songs and stories of the Jamaican peasantry, writing works that reproduced and appropriated this folk culture such as Jamaican Song and Story: Anancy Stories, Diggins Sings, Ring Tunes and Dancing Tunes (1907).2 Jekyll classified Jamaican Creole as a ‘feminine version of our masculine language’ and introduced the volume as offering ‘the thoughts and feelings of a Jamaican peasant of pure black blood.’ Despite his deeply essentializing and gendered framing of McKay’s poetry, Songs of Jamaica gives us insight into the early blossoming of Creole literature and the profound importance of publishing as a vehicle to express and circulate vernacular cultures. Published during a period of proto-nationalist sentiment – the Jamaican National Club was founded by Sandy Cox in 1910 – the book was indicative of a Caribbean, especially Jamaican, publishing boom that signified shifts in terms of author, language and audience.

Caribbean Publishing contains all of these works and a plethora of riches, yet like any research guide, it has its limitations. Publishers across the British Empire were required by law to send copies of all published works to the British Museum, so, technically the British Library should hold a copy of everything that was published in the Caribbean before independence. Yet, this is not the case, for several reasons to do with collecting and archiving. For example, ephemeral publications – which likely included radical, unofficial and DIY pamphlets – would have escaped legal deposit, thereby never becoming part of the collection. And even once items had arrived safely, they were vulnerable to loss, damage and destruction. For example, many of the cookbooks in the bibliography, including Caroline Sullivan’s The Jamaica Cookery Book: Three Hundred and Twelve Simple Cookery Receipts and Household Hints (Kingston: A. W. Gardner & Co., 1893) and 100 Jamaica Recipes (Kingston: Gleaner Co., 1934), were destroyed by bomb damage to the Museum during World War II. Despite these gaps, I hope that this bibliography will support further study of Caribbean publishing, book history, literature, and any of the subjects covered in this extensive guide.

I would like to end by noting that it was thanks to the Arts and Humanities Research Council’s student development fund that I was able to do a placement at the Eccles Centre focusing on Caribbean collections. And I would like to thank all of the wonderful Eccles Team!

Posted by jean.petrovic@bl.uk at 1:55 PM