Black Women’s Activism in the Americas

The Eccles Centre recently hosted a one-day symposium on Black Women’s Activism in the Americas, in collaboration with the Society for the History of Women in the Americas (SHAW). The day included a Show and Tell for the delegates, inspired by some of the topics under discussion. Here are some highlights from the display.

Claudia Jones
A few years ago the Library acquired a number of issues of Spotlight magazine. Produced by American Youth for Democracy during World War Two (formerly the Young Communist League), it was edited by Claudia Jones, the Trinidad and Tobago-born journalist and activist who emigrated to the US as a child. 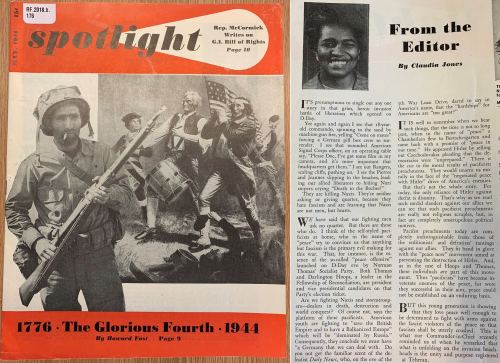 Following the persecution of Communists by the US Government, Jones was deported to Britain in 1955. She continued her Communist activism in the UK and went on to found Britain’s first major black newspaper, the West Indian Gazette, in 1958, and played a major role in founding the Notting Hill Carnival. You can read more about Jones’ life and work in the British Library’s Windrush Stories online exhibition here. As with many histories of activism by women of colour, Jones’ legacy was maintained for many years by community activists and historians, through works such as Claudia Jones, 1915-1964: A Woman of Our Times [researched and compiled by Jennifer Tyson], published by Camden Black Sisters Publications in c1988.

Angela Davis
Later US Communist activist and scholar Angela Davis was also represented with the Show and Tell including a number of works produced around her imprisonment in 1971 on murder and kidnapping charges. The case generated interest around the world and the display included items published in the UK and Germany demonstrating solidarity with her case, as well as a booklet produced by the United States Information Service and distributed by the US Embassy in London which endeavoured to present the ‘legal background’ to the case. 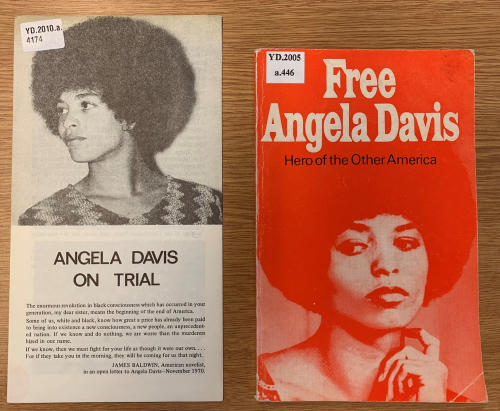 Alongside Official Government Publications, such as the USIS booklet shown above, another type of collection item which may be less familiar to British Library researchers are examples of political ephemera. The Library continues to acquire a range of this type of material including this striking broadside “I Am A Black Woman Communist”, featuring a portrait of Angela Davis, which was produced for the 20th Convention of the Communist Party USA in New York in February 1972. The following quote is printed beneath her portrait: "I am a black woman Communist / the corrupt government of this country could not accept such a combination / this is why they launch an effort to murder me." The artist's signature, identified only as ‘Sherman,’ is printed at upper right corner. 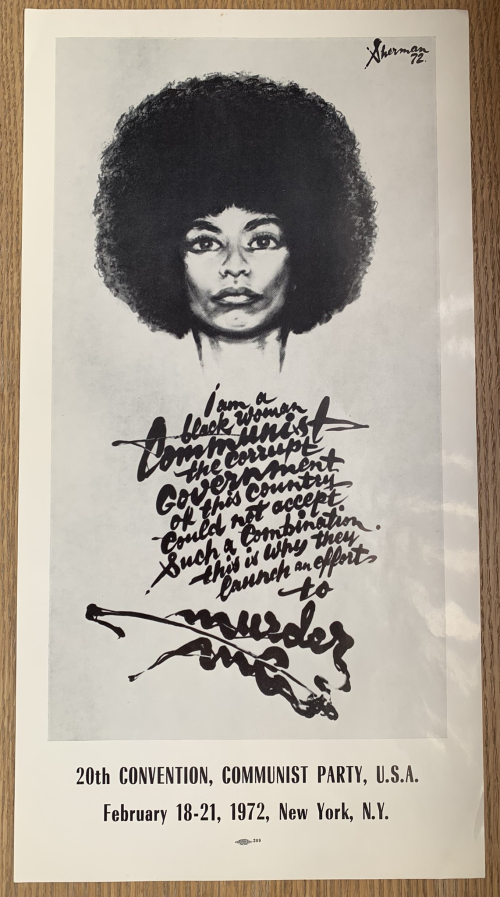 Léila Gonzalez
The political ephemera continued with election pamphlets produced by the Worker’s Party (PT, Partido dos Trabalhadores) during Brazilian federal elections in 1982. Included amongst those standing for office was Lélia Gonzalez, the leading Afro-Brazilian feminist, intellectual, politician, professor, anthropologist and Black and women’s rights activist. Her influential concept of Amefricanidade or ‘Amefricanity’ references both the black diaspora and indigenous populations of the Americas, signalling their histories of resistance as colonised peoples. Among a long career in activism and education, she ran as a federal candidate for the Worker’s Party in 1982. The broader context of the PT slate of candidates (included at the same shelfmark) provide fascinating insights in to the range of social justice concerns active in Brazilian politics in the early 1980s, including gay rights. 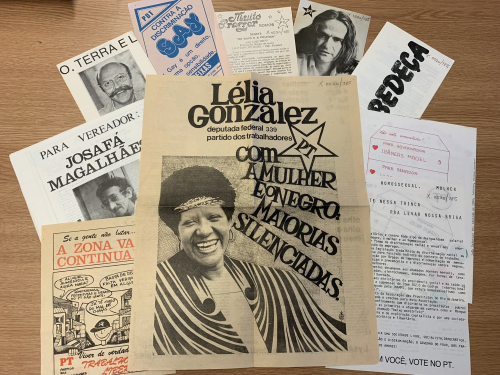 A political pamphlet of Lélia Gonzalez [centre]. Partido dos Trabalhadores Election Pamphlets (Brazil: O Partido, [1982]), Shelfmark X.0520/785; other pamphlets produced in support of other PT candidates in the same election can be seen behind (all stored at the same shelfmark)

Philatelic Collections
An underused part of the Library’s holdings, the Philatelic Collections offer a fascinating way into many different aspects of social and political histories. The Show and Tell was enriched by items from our Philatelic colleagues which illustrated the way black women’s activism has been commemorated on stamps, in turn helping to construct national and international conversations about women’s history and achievements. To find out more about Philately at the British Library, visit their subject page or their social media channels. 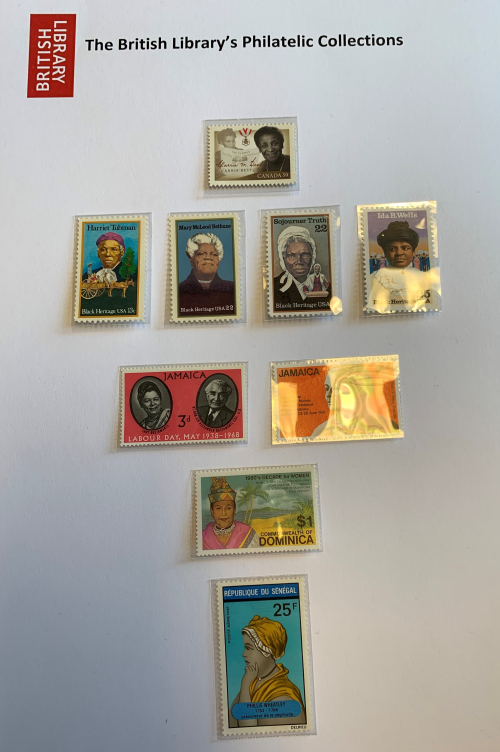 By Cara Rodway, Eccles Centre, August 2022 (with thanks to my Eccles and Americas colleagues for their help developing and mounting the Show and Tell)