Empires, Oceans, and Emotions: Unexpected Encounters in the Archive

Stephanie Narrow is a PhD candidate in the Department of History at the University of California, Irvine, and was a 2020 Eccles Centre Visiting Fellow at the British Library.

NB: This article contains an historical image and descriptions relating to slavery and indentured servitude which readers may find upsetting.

Beyond a shared language and general oceanic orientation, 19th-century California and Britain's Pacific colonies don’t appear to have much in common at first glance. And true, they differed greatly in terms of government organization, class structure, and the proper way to spell “pajamas” (or is it “pyjamas?”)

But when we factor in issues like 19th-century immigration, land rights, diplomacy, and the circulation of print media between these regions, we encounter more similarities than differences. And, indeed, these very issues echo into the 21st century. Exploring the historical entanglements between the American empire in California and Britain’s Pacific Empire better equips us in the present day to address issues of xenophobia, access to natural resources, and ongoing demands for decolonization.

It was my drive to better understand the evolution of these issues that brought me some 5,437 miles (or 8,750 kilometers? See, those pesky cultural differences arise again!) from California to the British Library in London. Through the generous support of a Visiting Fellowship from the Eccles Centre for American Studies, I came eager to research the entangled histories of the British and American empires during the height of the Pacific gold rushes in the 1850s. In particular, I wanted to explore how gold rushes impacted both Chinese immigration and Indigenous land dispossession; and how, or if, these empires shaped their own modes of imperial governance around each other. Was California looking to British colonies in Hong Kong, Australia, India, and British Columbia to shape their own policies about Chinese immigration, trade, resource extraction, and Native genocide? Or vice versa?

To help answer these questions, I turned to the papers of Henry Herbert, 4th Earl of Carnarvon—an aristocrat and lifelong politician who served as the Foreign Secretary during much of this period. As Foreign Secretary, he was the head of diplomatic relations with foreign countries and was the person to whom the British Consulate in San Francisco, California, reported. I was convinced that his papers held the answers I was searching for.

As I was perusing the thick folios of his correspondence, I greedily anticipated that “eureka!” moment (gold rush pun intended) that would clearly, decisively, and unequivocally support my hypothesis. And certainly, I found much material that helped me reconstruct global diplomatic relations in this period. I did, however, come across something rather unexpected.

Here I beg for an indulgent pause and reflection on “the historical profession.” As historians, our job is to go into archives, research, and from that research tell stories that both illuminate our past and (hopefully) shed light on our present moment. We’re taught to be objective, logical. From the outside, it seems a rather neat and tidy experiment (though in reality it never is.) But nowhere in my nearly decade of graduate school training was I ever taught what to do when you find something that so wholly disturbs the peace and tranquility of the reading room.

So, one very normal morning, I turned the page of one of Carnarvon’s many folios and came across a report. It included tables of ships’ cargoes, routes, and destinations. But the following note on one table sent chills across my body:

“Many of the Chinese jumped overboard.” 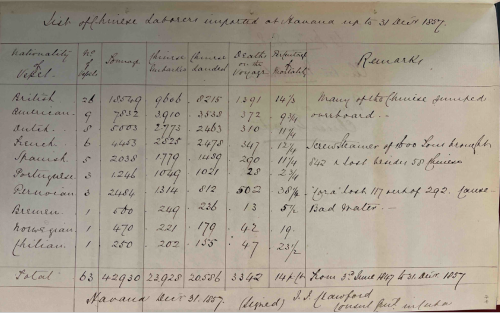 Image 1. Ledger detailing the deaths and illness of Chinese emigrants. The remarks point to the inhumane and unhygienic conditions aboard many sailing vessels. Letter from Clinton Murdoch, 19 June 1958. Carnarvon Papers Add MS 60782

This was a line in a ledger documenting the suicide of Chinese labourers aboard British sailing vessels who were sent, many through force or coercion, to Cuba in the 1850s. This “coolie trade” began in the 1840s and consisted mostly of men from China and South Asia. These labourers were often kidnapped or duped by British agents (as well as French, American, Spanish…) into so-called indentured servitude in the Caribbean, a very colonial labour solution to the end of the African slave trade.

And I sat as tears welled up and spilt over, soaking into my face mask. I couldn’t shake those six words that, for most, are probably the only earthly record remaining of their lives: “Many of the Chinese jumped overboard.” Out of the corner of my eye I spotted the furtive glances of one archivist, certainly equally parts confused about my emotional state and concerned that my tears might land on these priceless papers. I struggled to regain my composure, thinking about the hundreds of people who sooner sought what dignity they could in choosing a death at sea, far from home, than suffer under slavery and labouring on plantations in the Caribbean. It reminded me of the stories of the Middle Passage—of the horrific conditions that enslaved Africans faced upon their forced migration across the Atlantic. Many of them, too, sought solace in the sea.

At first I felt self-conscious and ashamed of my reaction. As professionals we are expected to train the emotion out of ourselves—especially us women—in order to be taken seriously. But then I realized there is strength in emotion, and the “ideal” of the unfeeling scholar is an affront to the humanity we so often claim to seek. Empathy is empowering, and I fervently encourage any reading this to embrace emotion, for it’s a universal tool that allows us to connect to other humans, past and present. After all, aren’t historians conduits between the living and the dead?

Posted by jean.petrovic@bl.uk at 4:28 PM