In Search of Vanilla

Kathryn Sampeck is Associate Professor of Anthropology at Illinois State University and was the 2021-22 British Library Eccles Centre Fulbright Scholar.

I arrived in London with all kinds of baggage—not only clothes, personal items, and tech to see me through six months of my UK Fulbright at the Eccles Centre, but also expectations about what I would find in the archives. My project investigates the relationships of race and food. I am interested in a notable case: chocolate and vanilla. I knew from previous research that these two substances had a long history of being paired (chocolate and vanilla “go together”) yet also semantic and culinary opposites (a difference of black and white; one cannot substitute for the other). One version of the semantic contrast of the two is as racial metaphors. For example, a 1974 article in Jet magazine describes how entertainer Connie Stevens “began her act with two Black dancers and two white dancers by saying that she has two daughters at home—‘one Chocolate and one Vanilla.’”

I knew from previous research that the association of chocolate with a dark colour, pejorative qualities such as sinfulness, and racial blackness occurred as early as the seventeenth century; the evidence was less clear about vanilla’s linkage with the colour white, purity, a bland taste, and racial whiteness. I assumed that I had not looked in the right places. Surely the British Library’s mountain of rare chronicles and medical and culinary books and manuscripts would fill in the gaps about when and how vanilla got its reputation. I thought vanilla would be there, perhaps a bit everywhere, and I had overlooked it because I was focusing on chocolate. My months in the archive and in British grocery stores and restaurants showed me how wrong I was! I now understand that I had an American bias about vanilla. My American bias is that vanilla is the go-to flavour for almost anything, and I assumed that such vanilla use had its roots in British cookery and medical practice. My deep dive into the British Library holdings showed this to be untrue. It is not until the nineteenth century that, as Mrs. Beeton claimed, vanilla was “in daily use for ices, chocolates, and flavouring confectionary generally.”

I wanted to know more about how vanilla fit in with other American ingestibles, so I cast my net broadly, looking for mentions in diverse kinds of documents of any American plants or foods. What I found surprised me, even after years of chocolate-focused research. More common than chocolate were turkey and potatoes, with the latter a regular entry in Queen Anne of Denmark's Household Book (Harley MS 157) from 1613. 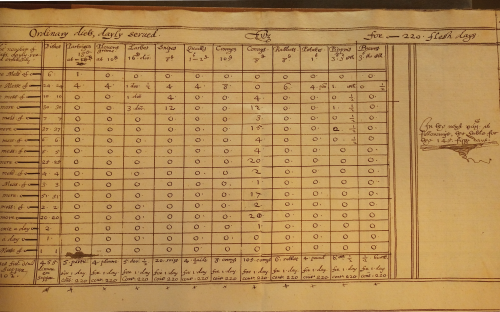 A close second was sassafras (Sassafras albidum), a tree native to eastern North America, showing up in botanical, medical, and culinary works by people including James Petiver, Apothecary to the Charter-House (“Virtues of herbs”, Sloane MS 2346), a multi-authored 1619-1674 note-book of medical and culinary recipes (Add MS 36308), Mary Glover’s 1688 cookery and medical receipts (Add MS 57944), and most prominently, in Pierre-François-Xavier de Charlevoix’s 1744 history and description of New France. Much less common—yet still more common than vanilla—was cochineal, a tiny parasitic insect (Dactylopius coccus) native to the tropical and subtropical Americas that feeds on prickly pear cacti (genus Opuntia). The dried, ground bodies of these insects yield the brilliant red, durable natural dye carmine, which certainly gave a rosy tint to those seventeenth-century concoctions.

The works that noted sassafras, cochineal, and other American substances often also included of cocoa or chocolate, such as the seventeenth-century Medicamenta usitatiora by George Bate, MD (Sloane MS 519). Cocoa or chocolate often occurred on its own (with sugar, water, milk, or cream); the most common additional flavour to chocolate was vanilla, a pairing that various sources from the earliest mentions to well into the nineteenth century claimed improved the taste of chocolate (and made it cost more!). 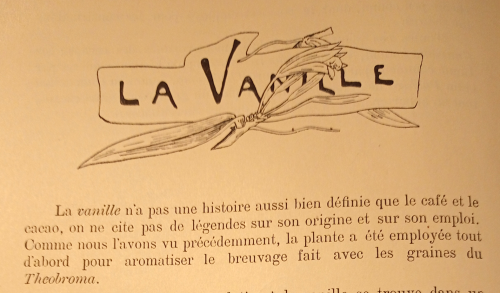 Culinary and medical recipes “white” or “clear” foods were abundant and had flavourings such as ambergris, sugar, mace, and cinnamon, but no vanilla.

Why didn’t one of these substances pegged as white become the contrast to chocolate? I found one clue in the seventeenth-century Observations on the preparation and virtues of Chocolate (Sloane MS 1471). After discussing the medical and sensorial qualities of “Bainilla”, the author goes on to describe that “All those Ingredients are usually put into the Chocolatte…But the meaner sort of people, as blackmors, and Indians commonly put nothing into it, but Cacao, Achiotte, Maiz, and a few Chiley with a little Anny seeds.” Chocolate consumption in itself did not distinguish race and class, but the subtleties that people added to it drew a sharp distinction between people of colour and (by implication, white) people of taste. The “Account of the inhabitants of Cathagena from Ulloa’s Voyage to South-America” in the New York Magazine; or A Literary Repository for July, 1792 echoes a similar complaint that chocolate (there known as cacao) was so common that an enslaved Black person “constantly allows himself a regale of it after breakfast” and Black women “sell it ready made about the streets”; their habit was to consume cacao with wheat bread. So, chocolate was cheap, easily available, and a significant part of the diet of Afro-Latin Americans, but the authors complain—and thereby distinguish their tastes from these South American Blacks—that it was not good (i.e. pure) chocolate: “This is however so far from being all cacao, that the principal ingredient is maize.”

The implication of these and other complaints is that in the hands of people of colour, chocolate did not realise its full potential for flavour. Furthermore, not just any flavour would enhance chocolate—vanilla was a key to good taste, worth paying more for. This brings me to the discovery that surprised me the most: vanilla became increasingly associated with the colour white in foods or medicines after it was associated with racial whiteness. Vanilla and chocolate history give a remarkable view into the depth of the history of the construction of racial disparities; colour did not precede colourizing. 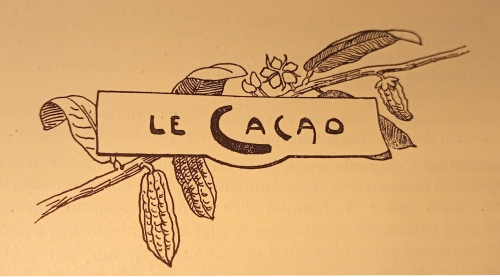