Suelin Low Chew Tung is an artist and writer and is based in Grenada; she was a 2020 British Library Eccles Visiting Fellow.

My days as an Eccles Fellow at the British Library, from July to August 2022, were happily spent pouring over maps, ledgers, bound letters, loose papers, and other documents related to Grenada, an island (and the name of the State of Grenada) located at 12°07’N 61°40’W.

Grenada is part of an archipelago variously known as the Caribes Islands, Lesser Antilles, West India Islands, and Windward Islands, within a space called the West Indies or the Caribbean. My project is to list changes in names during the French and British colonial ownership of this small island nation and overlay them on a contemporary map. I will then have a better idea of where was called what, why, and if any of the original colonial names survived as the physical landscape both changed and changed hands.

I spent most of my time in the Maps Reading Room reviewing single maps, duplicate maps, maps on paper and fabric, both coloured and black and white, in books and boxes. I came across maps referring to Grenada as l’isle de la Grenade (British Library shelfmark: Maps 147.e.8.); las Islas Granada (Maps D.DE.H.SEC.9.(506.)); island of Granada (Maps 82410.(2.)); and l’Isola di Granata (Maps C.24.f.10.). No wonder there is confusion as to the correct pronunciation.

After the British gained control of the island from the French in 1763, however, the name changed from la Grenade to Grenada.1 So, it’s Gre-nay-dah, not Gra-naah-da. That’s in Spain.

I was determined to find all documents relating to Grenada in the British Library’s catalogue. The staff in Maps, Rare Books, Manuscripts, Asia & Africa and the Newsroom were accommodating, and I was grateful for their input. Regarding the former, the Library contains one of the best map collections on Grenada. Representations on early maps in Jomard’s collection and the Blathwayt Atlas, showed the island as a blob, a cross, a backwards L, and even a crab’s claw.2 I saw the island’s shape evolve from a smudge to the elegant outline we are accustomed to seeing on Google Earth—a green mango set against blue sea. Unfolding each map opened new ideas for artwork, and suddenly Grenada was not just a speck on the world map but a place that vibrated throughout history.

I was beyond thrilled. 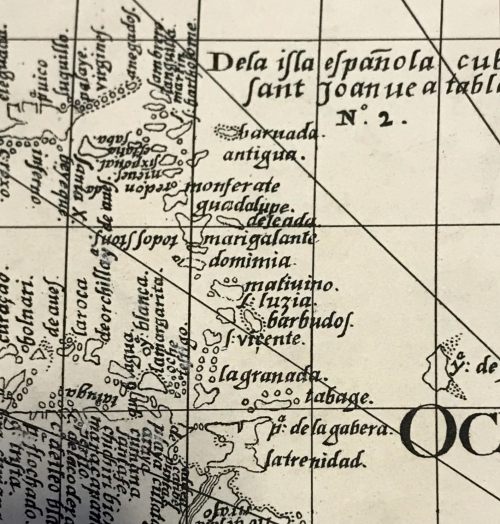 According to J.A. Martin (2013), de La Cosa’s map showing Grenada took information from Vincente Yañez Pinzón’s map of his exploration of the Americas in 1499-1500.3 Though Christopher Columbus is credited with ‘discovering’ and naming Grenada as Conception, Pinzón apparently visited Grenada on 1 May 1500 at what is now St. George’s Harbour. Map XVI shows Grenada as a blue cashew nut shape, identified as Mayo. Pinzón’s landfall is listed as “poyna” a corruption of Puerto de la Reyna, meaning Port of the Queen (Isabella). 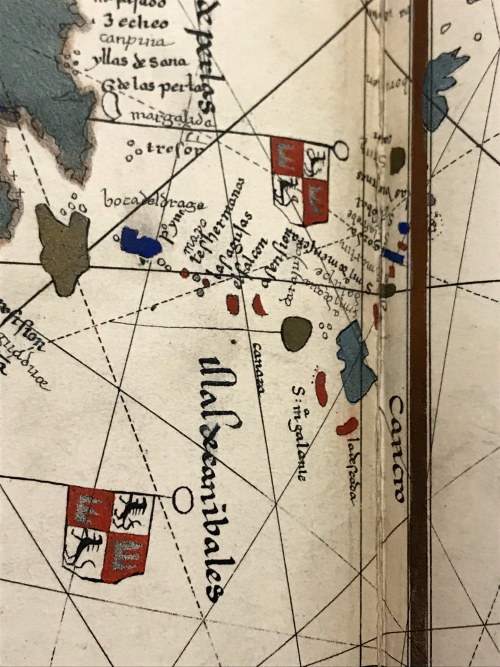 In the Blathwayt Atlas Volume 1 (British Library shelfmark: 196.e.1.), John Sellers’ Chart of the Caribe Islands (p. 25) enlarges that backwards L so the island shape is recognisable as a smaller version of modern-day Trinidad. On the 1656 map by Nicolas Sanson d’Abbeville and George duRoy, Les Isles Antilles (p. 26), Granada is a crab’s claw at the end of a shattered arm of granular rocks they called Granadilla. John Sellers’ The Island of Tobago (p. 29), includes a Chart of the Carriby Islands where the Granada claw is less pronounced, and the smaller rocks are called Granadillos. The Venezuela cum parte Australi Novae Andalusiae (p. 37), is a map of Venezuela showing the Caribbean archipelago. On this, Granada looks more like an opened nutmeg, eerily similar to the one on our national flag. 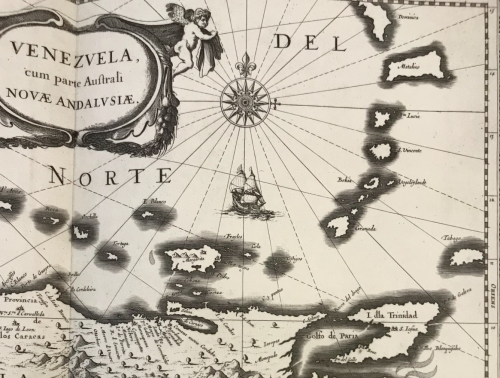 My visit with the Library's Philatelic team was also an absolute pleasure. I got a good introduction to how stamps are made, the Grenada stamps in the Tapling Collection, and Grenada stamps in general. As they explained: stamps hold a mirror to history. Indeed, these vignettes of our island’s story will inspire a series of artworks on the currency of stamps, given that fewer people are using stamps as postage.

Apart from creating a series of artworks inspired by the British Library’s collections, my main intention is to render a single map of Grenada place names. This will connect old place names with new, identify places which no longer exist and new spaces which fill that void. I hope to start conversations on shifting landscapes and narratives of Grenada’s past, and heritage education/appreciation/conservation policy.

This was my fifth visit to the British Library since 2011, but the first on a fellowship. The Eccles Visiting Fellowship provided opportunity and funding for research at the British Library, a safe space to dream, to learn and be inspired. I needed at least another month.

Posted by jean.petrovic@bl.uk at 4:00 PM