The British Library has digitised and made available online the only known copy of Una Marson’s pioneering play ‘At What a Price’ (1932).

Una Maud Marson was born in Jamaica in 1905. Throughout her lifetime she would live and work in the Caribbean, the UK and the USA. An editor, poet, playwright, activist, writer and BBC producer, Marson had a versatile and prolific career. The phenomenal breadth and range of Una Marson’s creative and critical outputs are yet to be fully appreciated, but there has been a recent renewed interest in the contributions she made to the cultural landscape of the British Empire and North America. Una Marson was the subject of a BBC production, Una Marson: Our Lost Caribbean Voice, which brought to life her incredible career and creations. Many of those creations can be found here, in the British Library, including her poetry collections. However, some of her works are a little harder to find. 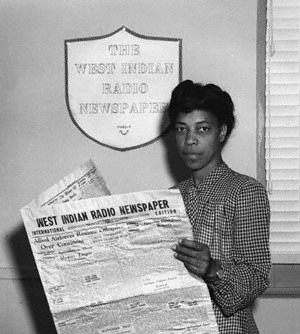 Through a recent project at the British Library, the Eccles Centre for American Studies has been supporting the research of Professor Kate Dossett and her project ‘Black Cultural Archives & the Making of Black Histories’. Part of this project involved examining the Lord Chamberlain’s Play’s (LCP) collection for plays produced in Britain written by Black playwrights. The LCP’s are the largest collection of manuscripts in the British Library. The collection consists of plays collected by the Office of the Lord Chamberlain from the years 1824 to 1968. They were collected because the censorship laws which existed at the time specified that plays had to be approved for a licence before a performance. This collection therefore provides an illuminating record of drama performed in the UK up to 1968. The research project has utilised this collection to find and promote the, often hidden, work of Black theatre makers in the early twentieth century.

One of the plays within the collection is Una Marson’s, ‘At What a Price’. Marson first wrote this play whilst living in Jamaica where it staged in 1932. The play was so successful that she used the profits to travel to London, England, where it was staged before British audiences. In London she got involved in anti-racist activism and became secretary to the League of Coloured Peoples, which fought for racial equality in the UK. The league and its founder, Harold Moody, sponsored Marson’s London production of her play in 1933. Yet, despite its international popularity no copy of the play’s script is known to have survived beyond the one kept in the Lord Chamberlain’s Plays collection. 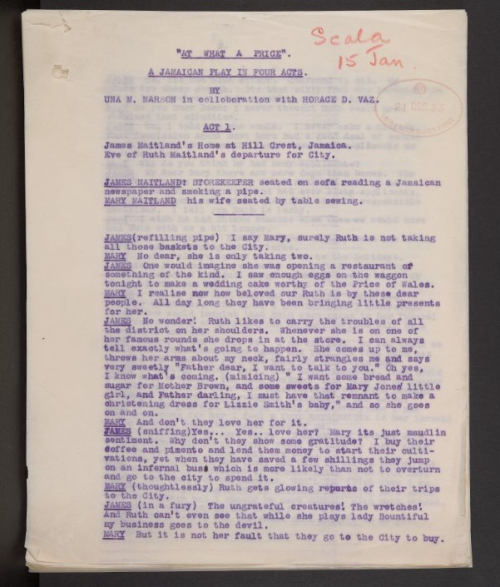 The play follows Ruth Maitland, a young Jamaican woman who moves from the countryside to Kingston, Jamaica, to work as a stenographer where she is pursued by a white Englishman. The play examines women’s agency in love and work, as well as issues of interracial relations and sexual harassment. The unique play script that Una Marson and her production team sent to the Lord Chamberlain’s Office has now been digitised in its entirety and has been made accessible through the British Library’s Digitised Manuscripts website. Researchers can now view this play and the related reader’s report from the Lord Chamberlain’s Office which outlines the department’s response in terms of whether the play was suitable for licensing. These images are available to view here.

With the digitisation of this play and related Lord Chamberlain’s Office correspondence, we hope to preserve and widen access to Una Marson’s many and varied cultural outputs. With the digitisation of this play, and others created by black theatre makers, researchers and audiences can discover ways in which black playwrights across the British Empire and Americas were frequently creating new cultural narratives and were at the forefront of movements for change that were an integral part of the British theatrical landscape in the early 20th century.

Digitisation funded by the Eccles Centre for American Studies.

Posted by jean.petrovic@bl.uk at 2:56 PM