Celebrating the work of Aline Kominsky-Crumb

The artist Aline Kominsky-Crumb, best known for her pioneering contributions to underground comics, passed away on 29 November 2022.

Kominsky-Crumb leaves an impressive legacy of ‘intimate, self-deprecating, and liberating’[1] comics, some of which were created with her husband, fellow cartoonist Robert Crumb. After relocating from New York to San Francisco in the 1970s, where she met Crumb, she became heavily involved in the underground comics scene, contributing to various publications for the subsequent decades, by boldly illustrating and giving voice to particularly feminist issues concerning sex, motherhood, family life and abortion.

The British Library holds a number of materials authored by Kominsky-Crumb and/or featuring her artwork, many of which have arrived via years of generous donations by J. B. Rund, an American book publisher and businessperson. Rund, owner of Bélier Press, has sent the British Library regular donations of underground comics and related ephemera since the 1970s. He is a prolific collector of monographs, comics, literary materials, original illustrations and erotica, many of which contain inscriptions, annotations and inserts from their contributors and creators, including some from Aline. Items by Robert Crumb are perhaps among the most prolific and sought after in Rund’s collection and Bélier Press’s 1976 creation R. Crumb’s Carload O’Comics (RG.2019.b.23), remains one of the press’s most successful outputs. With Crumb and Rund working closely together comes a number of (sometimes) rare and important pieces from Kominsky-Crumb making their way into our holdings thanks to Rund’s depositing practice here.

Bursting into what was typically seen as the male world of underground comics; Kominsky-Crumb unashamedly shone a light on contemporary issues and everyday life that was specifically based on women’s experiences and perspectives, skilfully doing so with humour and her characteristically unapologetic brashness. In the introduction to Kominsky-Crumb’s Love that Bunch, American comic book writer Harvey Pekar explains as much in his observations of Aline’s style. He writes:

‘Even if you like Aline Kominsky’s work a lot, as I do, you’ve got to admit that it’s loaded with ugliness. Her characters look ugly and frequently talk (“tawkh”) ugly, with whiny … accents. Aline’s at least as hard on herself as anyone else; her work is full of self-loathing. You’ve got to know this to understand her stories.’[2]

Below are just a few highlights from the British Library’s collection of Kominsky-Crumb donated by J. B. Rund, as you’ll see, some contain examples of the personal inscriptions mentioned above, showing both a the professional and personal working relationship that evolved between Rund and the Crumbs. 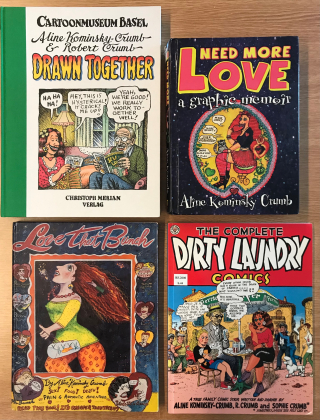 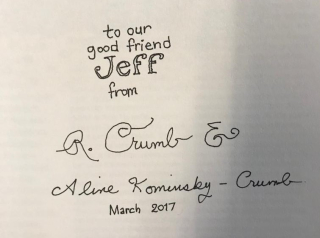 Inscription from the Crumbs to their ‘good friend’ Jeff (J. B. Rund) inside The Complete Dirty Laundry Comics, RF.2000.b.44. 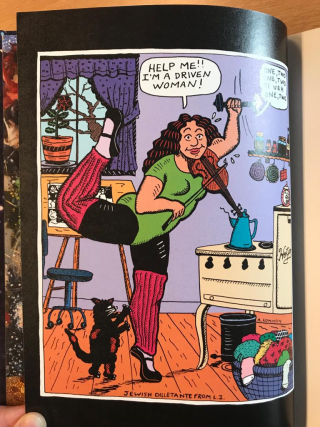 Interestingly, and perhaps testament to Kominsky-Crumb’s importance and influence as a female comic artist, Aline and Robert’s daughter, Sophie Crumb, would also go on to become a recognisable artist within the same comics scene years later. Sophie would get her first credit in a comic aged just six years old, alongside her mother, in Wimmen’s Comix #11 (April 1987). Registered British Library Readers can view a fully digitised version of this publication on their personal device using the e-resource Underground and Independent Comics. 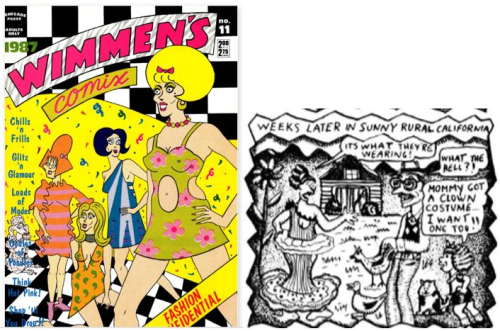 Sophie Crumb, aged 6, appears alongside Aline in Wimmen’s Comix written by Krystine Kryttre and Dori Seda, 1951-1988; in Wimmen's Comix, no. 11 (Long Beach, CA: Renegade Press, 1987, originally published 1987). Both are also mentioned in the comic’s introduction in which Renegade satirically examines ‘The 20 Best Dressed Women in Comics of 1987’. Images copyright © 2022 by Alexander Street, part of Clarivate.

From the collection donated by Rund, Readers can also find this book of chronological drawings compiled to show Sophie’s development as an artist from age 2 to 29. Aline writes the introduction to the book. In it she praises the talents of her ‘precious little “genius”’[3], as any mother would, but her irreverent tongue-in-cheek manner is ever present to ease the flow of too much ‘gushing.’ Aline’s introductory piece sits alongside a portrait by Sophie of her mother. Similarities between the two women’s artistic styles can certainly be seen. I particularly enjoyed reading Françoise Mouly’s insightful and illuminating words about her friend Aline in this recent New Yorker piece. Mouly quotes her husband, cartoonist Art Spiegelman, whose work also features heavily in Rund’s donation to the British Library, and whose description paints a picture of honesty in Aline. I think it is a fitting note on which to end this very short homage to Aline Kominsky-Crumb:

“She is the precursor to Lena Dunham, Amy Poehler, Amy Schumer, Sarah Silverman—women who are trying to grapple with their identities in a way that is not prettified. They are just trying to live and breathe as women with all their contradictions. And it’s a liberated and liberating way of looking at oneself.”[4]

All of the Library’s Aline Kominsky-Crumb holdings can be viewed in our Reading Rooms – you just need a free Reader Pass to gain access.