“The Flying Researcher”: South Asians and Indigenous Peoples of the Pacific Northwest

Rishma Johal is a PhD candidate in History at McGill University and was a 2022 Eccles Centre Visiting Fellow at the British Library.

As an academic in training, I believe that most PhD Candidates—particularly *cough cough* myself—are young, wide-eyed, naive students who hope to use their magical wings to fly from source to source in a matter of seconds. If any of this were remotely true, my thesis would be complete in a few days. However, no matter how aware I am of my naivete, there is always the glimmer of hope that the next research trip will be 'the one' in which I read every source at the archives. Needless to say, this hope is shattered as soon as an archivist hands me a file weighing a few good pounds in the morning of my very first day. Perhaps, the British Library experience has been my most dramatic encounter in terms of the amount of information available versus the amount of information that I can read in a short period of time. This autumn, as an Eccles Centre Visiting Fellow, I enjoyed five weeks at the British Library, yet even that felt too little to complete my research. Thus, if I had to select one challenge over any other, it would be my fight against time. Nevertheless, the availability and versatility of sources at the Library ensured that my visit was both fruitful and rewarding.

My research entails analysing files on South Asian migrants and Indigenous peoples of the Pacific Northwest—both marginalised communities about whom information at archives is generally limited. Specifically, my thesis examines intersections and dissension among early South Asian migrants and Indigenous communities of the Pacific Northwest from 1857–1947. This means that I am examining files on diverse groups of people. It is quite time-consuming to search for these sources, although the British Library holds a wealth of data. For this reason, the limit on the number of sources that I could request in one day quickly became another challenge, though I managed to power through most of the sources on my research list.

Conducting research at the British Library was imperative as it enabled me to access many archival records about early South Asian migrants in both Canada and the United States. Most of these files were held in the India Office Records and I also found correspondence among various levels of government on South Asian migration, from reading views of inspectors, politicians, and ministers in Vancouver and British Columbia to Ottawa, Britain, and India. I found numerous instances of concern over increasing numbers of South Asians in the Pacific Northwest that incorporated correspondence with American officials. The British Library has a priceless amount of information on the Ghadar movement (early Indian independence struggle that began in North America) and clandestine activities run by South Asians from California extending to Argentina, Panama, South Africa, Afghanistan, and Australia. However, the British Empire’s vast network of information gathering and sharing is only visible when files are accessed that discuss the Ghadar movement, “Hindu immigration,” and event specific files such as IOR/L/PJ/1325, File 3601 Canadian Immigration; the Komagata Maru Incident. These sources discussed the status of South Asians in Canada and noted the companies that they owned as well as the land purchases that they made, which was vital information concerning South Asians’ role in settler colonialism and Indigenous dispossession. 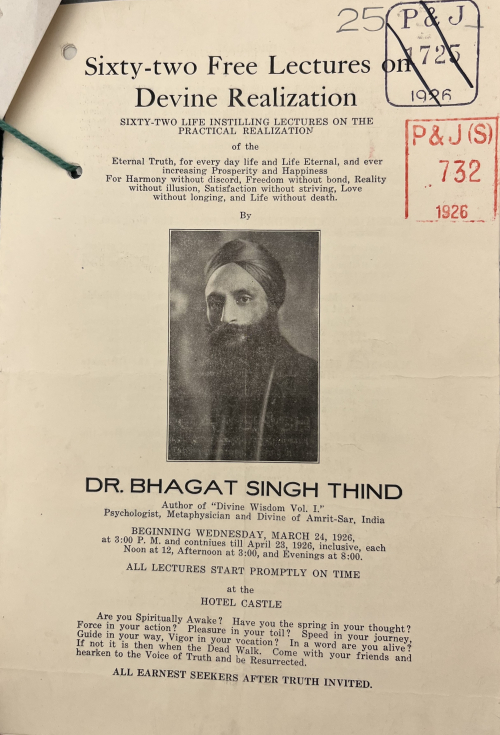 In one or two instances, I also found comparisons that officials made between the Indigenous peoples of British Columbia and South Asians. My favourite sources were rare finds that may not have been as useful as the above files for my thesis but were integral in terms of South Asian diasporic activity. For instance, I was thrilled to view a flag made by the Ghadar Party of San Francisco with a map that envisioned the borders of a free India as early as 1920 (Mss Eur C228: 1920). I was also able to view several maps made by South Asian surveyors and assistants within the British Indian army. These included maps of boundaries in Tibet, China, Afghanistan, and parts of Africa. The maps portray the role that some South Asians played as intermediaries within the colonisation of the Indian Ocean Arena before many migrated to North America. 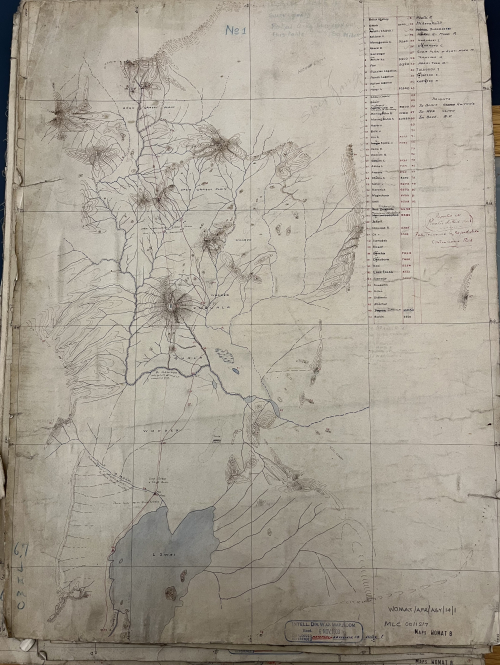 I was also interested in sources on Indigenous communities of the Pacific Northwest, though finding archival materials associated with specific tribes was difficult. For this aspect of my research, I utilised the vast collection of books that covered substantial components of the history of Indigenous peoples from California, Washington and Oregon. However, I was able to locate a few important firsthand documents such as the Report on the Condition and Needs of the Mission Indians of California (British Library shelfmark: A.S.217/19, 1873) made by special agents Helen Jackson and Abbott Kinney and The Report of the Special Agent for California Indians to the Commissioner of Indian Affairs by C.E. Kelsey (British Library shelfmark: Mic.K.2130, 1906). The former report provided a significant account of how white colonists dispossessed Indigenous peoples in Southern California, despite US government orders that recognized Mission Indians’ lands as reservation lands. The 1906 report outlined the conditions of Indigenous peoples living within California and described the areas that remained populated by them. Reading these reports in comparison to one another was particularly useful for my research. The Quarterly Journal of the Society of American Indians (British Library shelfmark: P.P.3437.bad) was another important source that discussed Native American issues, although individuals interested in Native Americans, rather than those of Indigenous ancestry, published most of the articles. More importantly, I was able to read a wide variety of books written about Indigenous peoples and to corroborate movements of certain Indigenous communities with the migration and land purchases of South Asians.

Overall, my magical wings were quite elated to fly from one source to the next at the British Library whether that was in a matter of hours, days, or weeks as I continue to read files that I photographed in October. I had an amazing experience as an Eccles Centre Visiting Fellow, and I would highly recommend this fellowship opportunity to other researchers in American Studies. Although I did not have a chance to attend many events, connecting with other Fellows and the Eccles Centre team at one of their Researchers' Packed Lunches was wonderful. Nevertheless, time is always of the essence. Alas, this researcher flies away to the next archive!

Posted by jean.petrovic@bl.uk at 1:37 PM