Into the Crucible of Revolution: Hindu Anticolonialism and Radicalism in Early Twentieth Century America

Christopher Chacon is a PhD candidate in History at the University of California, Irvine, and was a 2022 Eccles Centre Visiting Fellow at the British Library.

At the dawn of the twentieth century, amid the rise and fall of global empires and transnational movement, Hindu anticolonialists like Lajpat Rai and Bhai Parmanand arrived on American shores in hopes of stoking the embers of anti-imperial revolution once again in the American imagination. They counted among their allies Indian labourers in the fields of Central California and the urban streets of New York, American civil rights activists, Indophiles, and internationalist union members. Socialism, democratic nationalism, and anarchism wafted throughout the political air and the scene hungered for action. Out of the birth pangs of the twentieth century emerged Rai and Parmanand, figures draped in nineteenth century nationalism and Hindu revivalism and capable of leadership among the extreme factions of Indian anticolonialism.

For Rai, public fame and organizational support provided the foundation for his agenda in America. An ardent believer in education reform and social advancement, Rai built coalitions that strengthened his call for Indian independence. By engaging with the social and racial tensions that made America, Rai established a presence amongst the minds of the civil rights movement and helped gather support for independence through the Indian Home Rule League of America and through his works such as the Young India journal and The United States of America: A Hindu’s Impressions and a Study.1

Parmanand, by contrast, arrived in America not to bring about a social movement but instead to nurture a global revolutionary army that would topple the British regime in India. Under the guise of pursuing a master’s degree in pharmacy at Berkeley, Parmanand networked with other student radicals both in California and Oregon in order to procure weapons and cash for an anticolonial rebellion born simultaneously in the homeland and the global diasporic community.2 Already a prominent name in nationalist circles for his travels as an envoy for the Hindu revival organization, the Arya Samaj, Parmanand wielded the gravitas – and the imperial notoriety – required to move people in the direction towards open rebellion. It is for the latter that Parmanand’s mission failed. British imperial intelligence quickly identified his actions as a threat to their dominion over the Punjab and, upon his return to India, incarcerated him on the grounds that he possessed illicit materials and espoused seditious rhetoric.3

Through the generosity of the Eccles Centre, this research project acquired invaluable materials related to Parmanand’s involvement in the Ghadr Party of San Francisco as well as the movement at large. Among the collection gathered on American sources at the British Library, two specific pieces stand out as definitively exceptional: a ten-page report on Bhai Parmanand and a Ghadr Party poster that encompassed the spirit and reality of global intellectual movements. In the case of the former, most secondary literature on Parmanand assures the reader that he participated in the Ghadr Party movement – despite his autobiographical claims that he merely was at the wrong place at the wrong time. However, these same materials often omit how he functioned in the organization and what roles he fulfilled by its conclusion.4 With the incorporation of this report and other documents related to his roles as nationalist and revolutionary, a clearer picture emerges that resolves both questions about his imprisonment as well as inquiries into his future as a diehard spin master of the Hindu Mahasabha in the 1930s and 1940s.

As for the Ghadr Party poster, this masterpiece connects the dream of socialist revolutionaries with the vision of global Hindutva ideologues. The name 'The United States of India' resides over the idealized map of an independent and unbroken India signifying its place of prominence in Asia. The open border with the Indian Ocean lays claim to the seas. However, the text that surrounds the image speaks to its special relationship to the US. 'In Union There Is Strength' and 'Resistance to Tyranny is Obedience to God' borrow from the American Revolution and contextualize the American war of independence against the British as the preamble for the Indian war to come. Finally, the reader comes to its zenith, the clarion call to arms: 'What Are YOU Doing to Liberate India?'5 This question does not discriminate based on nationality or appearance. Rather it divides the world into two camps: freedom fighters and imperialists. Visual materials such as this poster elevate the historical conversation and provide insight into the psychology of Rai and Parmanand in the 1910s. Without it – and the financial support of the Eccles Centre – this project would lack these vital pieces to the story of global Hindutva and its revolutionary phase in the 1910s. 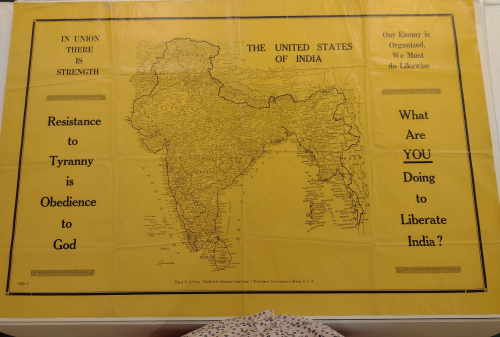 3. For more on the subject, see, Richard J. Popplewell, Intelligence and Imperial Defence: British Intelligence and the Defence of the Indian Empire 1904-1924. Oxfordshire: Routledge, 1995.

4. IOR/L/PJ/6/1405, File 4095 – Lahore Conspiracy Case and the Lahore Supplementary Conspiracy Case. Sep 1915-Dec 1916. Number 56 in the list of the accused, “Bhai Parma Nand” is given a lengthy 10-page backstory which provides much context for both his ventures prior to and following his San Francisco and Portland interlude.