We've enlisted our Eccles Centre colleague, Jean, as a new, regular contributor to the blog. Here, in the first of a series of posts on slavery in the U.S., she takes a look at some of the slave narratives to be found in our collections:

As Phil mentioned in his post last week, Twelve Years a Slave, the Narrative of Solomon Northup (1853; BL shelfmark 10881.b.38), is one of many American slave narratives held by the British Library. In the mid-nineteenth century, the narratives of runaway slaves provided the antislavery movement with a highly effective weapon and after the Civil War many more narratives were published, as were reminiscences by those who had spoken with slaves.  These narratives provide a rich insight into the lives of the slaves, their work and relationship with their owners, their families and life in the slave quarters.

Not surprisingly, descriptions of the cruelty endured by the slaves – whipping, ear-cropping, the wearing of iron collars and extended isolation – feature prominently in these works. Whilst some of those who escaped this brutal existence did so alone, others were helped by the ‘Underground Railroad’, an extraordinary network involving thousands of individuals, including many former slaves, who were willing to break the law and/or endanger their own lives by feeding, hiding and disguising slaves en route to freedom.

The Narrative of Henry Box Brown ([1849]; shelfmark: 10882.b.35.(3)) outlines the journey of one of those helped by the Railroad. So-called because he escaped from Richmond, Virginia, to Philadelphia in a box measuring three feet one inch long, two feet wide and two feet six inches deep, Brown chose to escape from his master not because he was physically abused but because, after his wife and children were sold to another owner, ‘slavery now had no mitigating circumstances, to lessen the bitterness of its cup of woe.’ It has been estimated that more than a third of slave families were broken up by the sale of one or more family member as a result of their masters’ debts, bankruptcy, relocation or death. Many slave narratives echo Brown’s assertion that these separations ‘were more dreadful to all of us than a large number of lashes inflicted on us daily’. 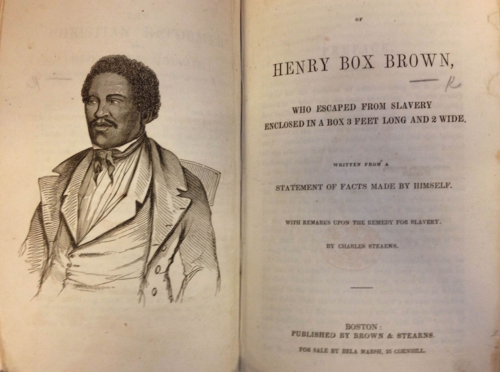 Until 1850, fugitive slaves who successfully made it to the northern states were relatively secure. Yet the Fugitive Slave Law changed all this. In his narrative, Twenty-Two Years a Slave, and Forty Years A Freeman (1859; shelfmark: 10880.bb.15), Austin Steward describes how he witnessed the dreadful consequences of this Law: as he travelled by steamship down the Hudson River, a runaway slave who had been recaptured by ‘a human blood hound’ and returned to his ‘avaricious and tyrannical master’ attempted suicide in front of Steward, rather than face returning home to his former life. 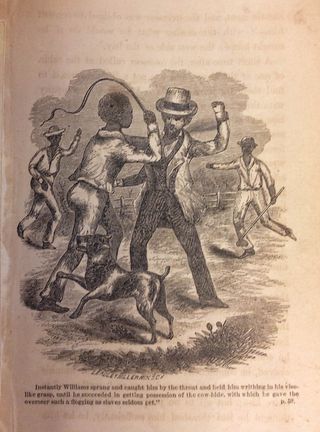 While many fugitive slaves later helped facilitate the escape of others, a large number played a crucial role as abolitionist agents and orators. The most famous of these undoubtedly is Frederick Douglass whose first autobiography, Narrative of the Life of Frederick Douglass, an American Slave (shelfmark: 1452.b.32), was published in 1845.

The powerful contemporary insight into the ‘peculiar institution’ provided by these narratives is supplemented by that of journals and tracts published by abolitionist societies, as well as religious sermons, political speeches, newspaper articles and advertisements, travellers reports and works of fiction and these will be highlighted in my next two blogposts. All blogs are based on 'Slavery and Antislavery in the United States of America', The British Library Journal, Vol.23 (1), Spring, 1997. Sixty slave narratives published before 1866 can be found in American Slavery: Pre-1866 Imprints (print copy also at shelfmark: 2725.e.2858).

Posted by Carole Holden at 9:16 AM in Bibliography , Collections , History | Permalink | Comments( 0)

Waiting for the scroll: On the Road is coming

It’s been a busy month for all of Team Americas, with much of my and Matt’s time in particular taken up with activities relating to our forthcoming exhibition On the Road: Jack Kerouac's manuscript scroll. Yes, we’re excited at the prospect of the arrival next week of Jim ('keeper of the scroll') with the typed manuscript, which will exhibited from 4 October until 27 December in our newly re-launched Folio Society Gallery in the Library's Front Hall.

The scroll will be taking centre stage in a specially designed 16 metre case so we decided that the accompanying BL material should focus on our sound recordings and Steve has put together a great ‘soundtrack’ to the scroll and the Beat Generation. You will be able to hear several contributions from Kerouac, including an excerpt of On the Road, jazz recordings which echo references in the novel, plus Allen Ginsberg reads Howl, and there are contributions by William Burroughs, Herbert Huncke, Joyce Johnson, Carolyn Cassady et al. Oh, and there’s Neal Cassady reading Proust too!

And the exhibition should look great, thanks to Fiona’s design and the generosity of Carolyn Cassady, the Allen Ginsberg Estate and the Kerouac Estate in letting us reproduce some wonderful images. So, schedule your visit now. The exhibition is free and there’s also an excellent events programme, including a preview screening of Walter Salles’ new movie.

Regular readers of the blog will know that we’ve highlighted our sound recordings relating to the beats before, but if you’re a new reader, here’s the link to a bibliography Steve put together some years ago. We also have really strong printed collections, and here’s a bibliography of those (be warned, it’s BIG). Picking just a few of these books to put in the exhibition was very difficult so we’ve opted for the holy trinity of Kerouac, Ginsberg and Burroughs, with just a couple of others.

Apart from writing Kerouac labels, I was also involved in our Inspired by Artists’ Books event on 4 September, at which we showcased some of our wonderful artists’ books and fine press holdings (here’s Fran’s blog on the event).  I suppose it was inevitable that my brain would end up connecting the 2 themes so I started to think about whether we had any beat-related books which fall in to this category. Of course we do, and I featured Bill Burroughs and David Bradshaw’s Propagation Hazard at the event. But for this blog, I’ve chosen a Kerouac title. It’s by Mark McMurray, a colleague who is Curator of Special Collections and University Archivist at St. Lawrence University, teaches courses on the history of the book and printing, and who set up his own Caliban Press in 1985 - how he finds the time I don’t know! Anyway, Mark has made a couple of jazz-related titles, small, but perfectly formed and lovingly made, and here is an image of his History of Bop by Jack Kerouac. 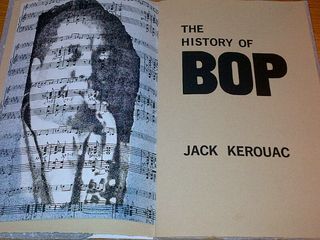