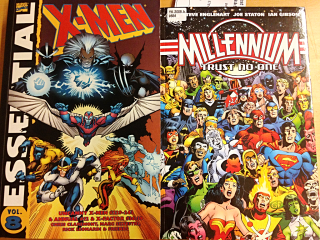 After reading Luke Pearson’s blog post on Indigenous X about Indigenous Australian characters in comic books, I decided to see what comics the British Library held that represented Indigenous Australasian characters.[1] Instead of reiterating Pearson’s existing article, which I recommend reading, I have simply listed the comics I was able to find and their shelfmarks at the end of the post. The Condoman poster for a sexual health campaign is a great example of how comic characters can appeal to and educate children and teenagers. By making Condoman an Indigenous man there is a clear relatability for the Indigenous teens that this poster was aimed at.

It is clear that creating characters that readers or viewers can identify with is important; it provides a role model that one can recognise themselves in. Ryan Griffen, creator of the television show Cleverman – a program centred on Indigenous Australian characters and inspired by Indigenous culture, explained how he had created Cleverman so his son had Indigenous superheroes he could be as excited by as he was the Teenage Mutant Ninja Turtles:
‘I wanted to create an Aboriginal superhero that he could connect with, no matter what others said. I wanted a character that would empower him to stand and fight when presented with racism. Just like the old dreaming stories, Cleverman would be able to teach moral lessons; not only for my son, not just for Aboriginal people, but for many more out there as well.’[2]
As Pearson points out, the majority of the Indigenous characters he lists were created by non-Indigenous people. I was interested in how some of these Indigenous characters were depicted so decided to focus on one of them, a DC character named Betty Clawman. She appears in the Millennium comic, the compilation of which is in the British Library collections.[3]

Betty does not appear until week two of the series, where she is found squatting by ‘the aptly named Ayres Rock, near Alice Springs, Australia.’[4]  The comic series was produced three years after custodianship of Uluru was returned to the Anangu traditional owners so it seems likely this event caught the international imagination and resulted in Indigenous Australians being associated with Uluru. Ayres Rock was the name that colonisers gave the rock, it was named after a South Australian Premier called Sir Henry Ayres, I am unsure how this makes it ‘aptly named’ and I assume it underlines how little research the comic writers had undertaken into Indigenous Australian history and culture. Betty has been selected as one of a group of people to become immortal guardians of earth, a fact she already knew before she was approached as she foresaw it in the ‘Dreamtime.’[5] While Betty seems to impress the existing Guardians, she is rather passive throughout the encounter and makes multiple references to dreaming and the land – ‘while I, rather than dreaming on the land, learn how to wake from its embrace!’[6] These vague references around dreamings and land could also be reference to a half-formed understanding of Indigenous culture through the debates surrounding the return of Uluru. It seems no coincidence, however, that this comic was produced in 1988, the same year Australia celebrated the Bicentennial of its ‘founding’. On 26th January 1988 (Australia Day) Indigenous and non-Indigenous people alike took to the streets to protest the celebration of two-hundred years of history that tried to rewrite the 40,000 years of history Indigenous Australia had prior to British conquest. The protests sought to highlight ongoing denial of land rights along with the integral structural racism Indigenous Australians often experienced. It would be interesting to know how much of this political background Englehart, Staton and Gibson were aware of when they conceived Betty Clawman.

The other future Guardians set to join Betty suggests that the writers were keen to create an inclusive and diverse range of characters, yet they fell into the trap of easy cultural stereotypes (another future Guardian is Xiang Po, a Chinese woman who seizes the opportunity because ‘it never would have happened before the reforms)[7]. While I understand that the pages of comic books do not lend themselves to nuance and subtlety, it is a shame that the characters are so stereotyped. Betty’s willingness to follow the existing Guardians could at first be taken as passivity, but she often shows that she is confident and intelligent, such as questioning the teachings that the universe is logical. She is fore fronted in the cartoon frames and praised for her readiness to become a Guardian. I was very excited about the empowering depiction of Betty until the selected new Guardians transitioned into their new forms – the stereotyping became almost comical again: Xiang Po becomes incredibly sexy and her whole appearance is Westernised. Betty quite simply disappears! She becomes an invisible spirit that is simultaneously part of the earth and the other Guardians but no longer visible or audible; she informs others and perhaps shapes their actions but can no longer take actions herself.

This characterisation of the spiritual silent Indigenous person is reminiscent of Gateway, the Indigenous character Marvel created the same year the DC created Betty Clawman. Like Betty in her Guardian form, Gateway is silent and only communicates through telepathy. He simply sits and watches the actions of the X-Men, opening portals for them on request.[8] From my close reading of these two comics and looking at the Indigenous characters on Pearson’s list, it does seem that if writers want a mysterious character that is imbued with spirituality, they make that character Indigenous. While there is perhaps nothing necessarily wrong with depicting an Indigenous person as deeply wise and spiritual, it becomes problematic when that is all they are shown as. It firmly places Indigenous Australians in a position of ‘other’, making it difficult for Indigenous people to identify with those characters, let alone other comic book fans.

Joanne Pilcher is currently carrying out a PhD placement project at the British Library, exploring contemporary publishing in Australia. If you would like to know more about placement opportunities at the Library for doctoral students please click here.

In my placement at the Library I have suggested the purchase of comic books that show a wide variety of Indigenous characters and complex personalities. If you have any other good suggestions do tweet me: @JoannePilcher1

[2] Ryan Griffen, ‘We need more Aboriginal superheroes, so I created Cleverman for my son’, The Guardian, 27th may 2016, https://www.theguardian.com/tv-and-radio/2016/may/27/i-created-cleverman-for-my-son-because-we-need-more-aboriginal-superheroes, [last accessed 29/01/18] 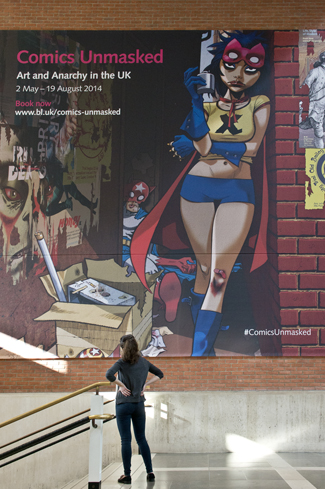 Comics Unmasked: art and anarchy in the UK opens at the British Library on 2 May: the Entrance Hall is already dominated by a giant poster by Jamie 'Gorillaz' Hewlett, featuring an as-yet-unnamed comic book character (above). She is introduced thusly: 'a sultry, caped female, equipped with hipflask and knuckle duster, in an alley way after vanquishing a generic super hero, shown dazed on the floor'. Should we fear for Capt. America? Probably not. Despite the subtitle we expect a few US publications to appear in the exhibition: we'll report back and see if we can beat the Robert Crumb item that we snuck into our Americas Treasures gallery exhibition a few years ago.

As well as the physical collection of comics, students of the format (and its various genres) can make use of some online resources, which can be accessed in the reading room. The first, shown above, are various collections of comics and graphic novels included in the Biblioboard collection.

We have also recently added to the Underground and Independent Comics collection, 'alongside interviews, criticism, and journal articles that document the continual growth and evolution of this artform'. It includes a run of The Comics Journal. 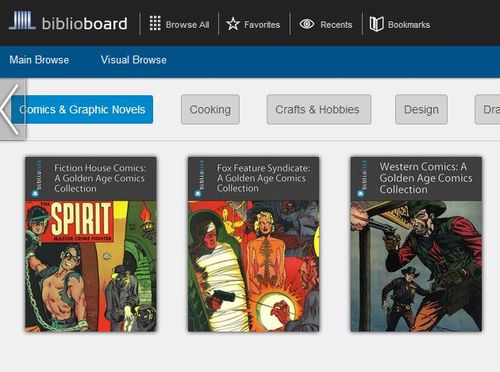 Elsewhere in the collection (and this is sparked by a discussion of the Hawkeye Initiative) we hold Marleen S. Barr, Future females, the next generation: new voices and velocities in feminist science fiction criticism (2000), which includes the chapter, Elyce Rae Helford, 'Postfeminism and the Female Action-Adventure Hero: Positioning Tank Girl'.

Posted by Web Editor at 10:24 AM in Comics-Unmasked , Exhibitions | Permalink | Comments( 0)