My reading list is all a bit dark and Gothic at the moment, something that has only a little to do with having moved near to Strawberry Hill House. As well as being a change from my normal tastes, it has also nudged me to remember a lengthy conversation I had about a housemate’s lecture, back in my student days, concerning the Caribbean and Gothic literature.

Not long after Horace Walpole, author of ‘The Castle of Otranto,' advocated attempts to “blend the two kinds of romance, the ancient and the modern,” [p. 9, 1765 edition, Shelfmark: C.40.c.24] authors of Gothic fiction frequently looked to the spaces of Britain’s colonies for frightening and surreal inspiration. In the Caribbean this could be found in the horrors and social conflicts that were an ever-present part of slavery and the plantation system; race, landscape, social order and sexual desire, overt concerns of many British and Caribbean colonials, were used as narrative drivers. The Library holds a significant collection of works which use Caribbean locations or people to create the above effect, including, Charlotte Smith’s, ‘The Story of Henrietta’ [in ‘The Letters of a Solitary Wanderer…,' 1800, Shelfmark: RB.23.a.31619], Cynric Williams’ ‘Hamel, the Obeah Man’ [1827, Shelfmark: N.470] and many others.

The relationship between Gothic literature and the Caribbean is not one-note, however. The Caribbean was used to highlight metropolitan anxieties but Gothic styles were also used to illustrate the horrors of the plantation economy. For example, ‘The History of Mary Prince' [Shelfmark: 8157.bbb.30] uses Gothic stylistic conventions to expose the horrors of slavery; although it is noted by critics that the essence of Gothic writing can mean that the power of such writing is also reduced and sanitised through the use of these conventions. 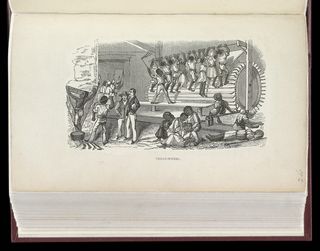 This work (James Mursell Phillippo, Jamaica, its past and present state, 1843) identified by British Library, is free of known copyright restrictions. [Shelfmark: 1304.h.4.]

The dynamic between place and literature also changes over time, with postcolonial novels such as ‘Wide Sargasso Sea’ [Shelfmark: X.908/15430] not only commenting on the postcolonial Caribbean but reinterpreting works which used the Caribbean to drive part of their narrative [in this case ‘Jane Eyre’, Shelfmark: 12619.g.10]. Such work is not restricted to the Anglophone Caribbean, however - Francophone and Hispanic authors have also attempted to grapple with postcolonial realities through Gothicised abstractions, with works such as ‘La cathédrale du mois d’août’ [1980, Shelfmark: X.958/8996; trans. 1987, Shelfmark: Nov.1988/249] and ‘Del rojo de su sombra’ [1992, Shelfmark: YF.2008.a.11557; trans. 2001, Shelfmark: H.2003.3535] tackling aspects of politics, religion and culture in Haiti and the Dominican Republic.

This is a taster of a large collection and area of study, with much left unmentioned – including, since you’re probably thinking of it, Zombies. I can recommend digging around on Explore the British Library, and reading Lizabeth Paravisini-Gebert’s contribution to ‘The Cambridge Companion to Gothic Fiction’ [2002, Shelfmark: YC.2002.a.14753] if you want to know more.

The Empire of Haiti: digitising some of the Nineteenth Century 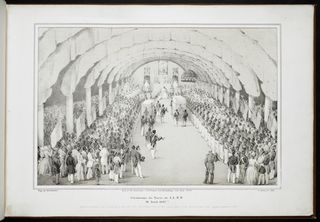 Coronation of Faustin I, from Album Imperiale d'Haiti, New York 1852

A short but well-illustrated Team Americas post this week. We've all been a bit busy (especially Carole and Matthew who are currently refining the Kerouac exhibition labels like a pair of master sculptors). One of the things I'm currently working on is making a home for some Haiti materials we recently had digitised and so today seemed like a good time to share some highlights of the content with you.

The whole selection is quite broad, composed of various manuscripts, maps and a book of lithographic prints. Two of the book's prints and one of the maps are on show here. The book Album Imperiale d'Haiti commemorates the coronation of Faustin I (previously Faustin-Elie Soulouque). Above is the coronation scene and below the lavish frontispiece. The book also contains a further scene of Faustin leaving the ceremony and portraits of a number of dignitaries. 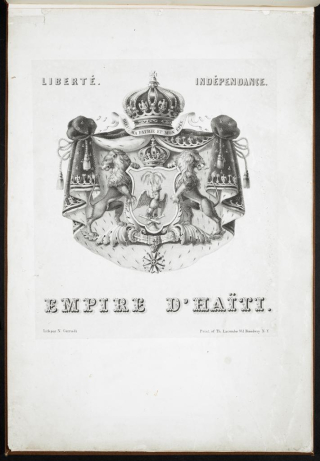 Due to the impracticality of uploading .tiff files to the blog what you see here are very low resolution images. Once the full size versions are up you will be able to see them in all their zoom-able glory. While the maps were designed to be viewed in microscopic detail, I doubt that the engraver for the Album imagined that his work would ever be looked at so closely - and I suspect there are some interesting omissions in the landscape plates for keen-eyed viewers. 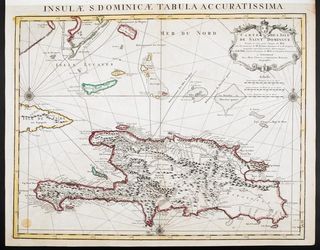 Team Americas is feeling very digital at the moment, with the American Civil War, War of 1812 and this project all going on at the same time. We'll keep you posted as to how all of them are coming together - look for any announcements interspersed amongst the On the Road quotes on our Twitter stream.

Haiti on my mind 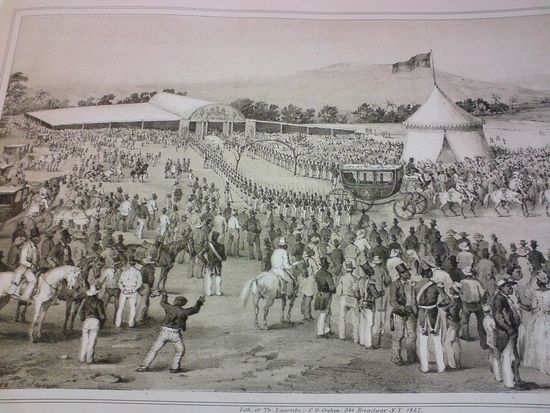 A month or so ago I received notification of a conference on Haiti and it caused me to think about our holdings from the country.  At the American Studies Association annual conference in Albuquerque last year, I had met a Ph.D student who was working on 18th and early 19th century Haiti and I was able to tell her that we had some letters between the widow of Henri Christophe and Mrs Thomas Clarkson. Perhaps not totally surprising since they are included in Thomas Clarkson’s papers, but we’ve got a lot more on Haiti than you might think. And we’ve been finding even more as part of the work that Beth is doing for our Caribbean digitisation project (who knew that we had a 1793 letter from Dessalines!). I had intended to write a blog on the subject but was distracted by having to go off to do jury service for most of December. I never imagined that Haiti would have been brought back to my attention - and the centre of the news, in the way that it has over the past week, as we have watched on TV the dreadful aftermath of the earthquake and its effects on both the people and the land.

Inevitably I’ve been thinking about the history of the country – where more bad things have happened to the people over the years than you can possibly imagine. A piece in yesterday’s Guardian provided some much needed historical context for the disaster, with a good chronology of events. But some might question the omissions (what about the impact of neo-liberal globalisation policies and U.S. led or influenced military coups for example?), and it’s sadly become all too easy to perpetuate the ‘Haiti as tragedy’ narrative. So for a somewhat different perspective, you might want to listen to US policy in Haiti over decades "Lays the foundation for why the impact of natural disaster is so severe", which features Bill Quigley, the legal director at the Center for Constitutional Rights, and Brian Concannon, director of the Institute for Justice & Democracy in Haiti.

And I’m also reminded that at such times of terrible disaster and suffering, there are always those who try to take advantage, so if you’re thinking of donating to any of the disaster funds, make sure you choose carefully to avoid the scammers. The BBC has provided a useful list.