Dialogue with a Dead Poet: Jack Spicer's After Lorca

This week marks the 80th anniversary of the death of the the poet and playwright Federico García Lorca, murdered by a Nationalist firing squad at the beginning of the Spanish Civil War. One of the best known European poets of his time, he soon became a martyr for the international anti-fascist cause. Lorca’s poetry and drama have influenced the works of many American poets, including Allen Ginsberg, William Carlos Williams and Langston Hughes, who translated his play Blood Wedding into English. Leonard Cohen based the lyrics for his song ‘Take this Waltz’ on Lorca’s poem ‘Pequeño vals vienés’, and named his daughter Lorca after the poet. 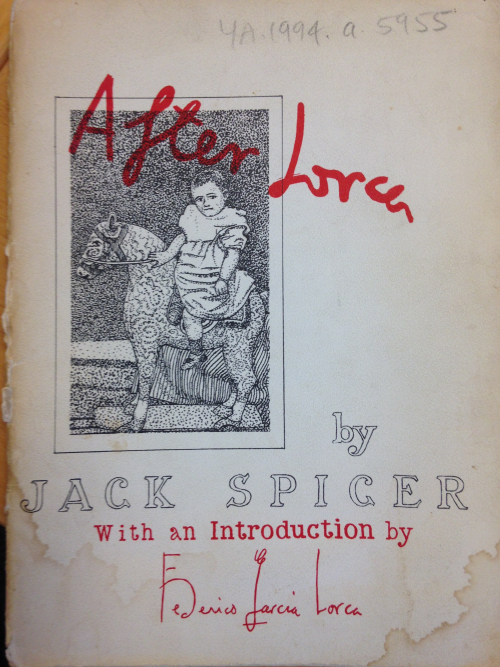 In 1957, the American poet Jack Spicer (1925-1965) published After Lorca, a book containing his translations into English of several poems by Lorca alongside his own work. One of the key texts in the collection is Spicer’s translation of Lorca’s ‘Ode to Walt Whitman’, suggesting Spicer’s intention to outline a genealogy of queer poetry.

After Lorca plays with post-modern theories about authorship. Spicer’s translations appear together with his own poems written in Lorca’s style, but the book presents all works as translations and does not provide any indication of their original author. In addition, Spicer intercalates a series of conversational letters to Lorca discussing poetry writing.

Amusingly, the book contains an introduction by Federico García Lorca himself, who at the time of publication had been dead for more than 20 years. Writing from his grave located ‘Outside Granada’, the ‘Lorca’ invented by Jack Spicer appears bemused by the project, and warns the reader that this is no ordinary poetry collection:

The reader is given no indication which of the poems belong to which category, and I have further complicated the problem (with malice aforethought I must admit) by sending Mr. Spicer several poems written after my death which he has also translated and included here. Even the most faithful student of my work will be hard put to decide what is and what is not Garcia Lorca as, indeed, he would if he were to look into my present resting place. The analogy is impolite, but I fear the  impoliteness is deserved.