Last month we celebrated the life of Hallie Flanagan, director of the ground-breaking Federal Theatre Project (1935-39). This blog will look at one of the Federal Theatre’s most innovative and controversial accomplishments: the ‘Living Newspapers’. It will also share our realisation concerning the connection between Hallie Flanagan and Mary Eccles, co-founder of the British Library’s Eccles Centre for American Studies.

Flanagan first encountered living newspapers – in which social and political issues were given theatrical form – while visiting the Soviet Union in 1926. Such productions had emerged during the Russian Civil War as a means of promoting a pro-Soviet version of the news to the largely illiterate Red Army troops. Following the Bolshevik victory, this agitprop art form continued developing and expanding. In 1923 the hugely influential collective 'Blue Blouse' was founded under the auspices of the Moscow School of Journalism. By 1928 more than 7,000 Blue Blouse troupes had been established across the nation. Performances typically opened with a parade of ‘headlines’, followed by a dozen or so humorous or satirical  sketches on topics as diverse as trouble in a local factory to religion and international relations. Siniaia Bluza (Moscow, 1924-28; shelfmark ZA.9.d.615) - the irregularly published Blue Blouse periodical - supported these performances, containing suggestions for staging, sets and costumes as well as librettos for skits. 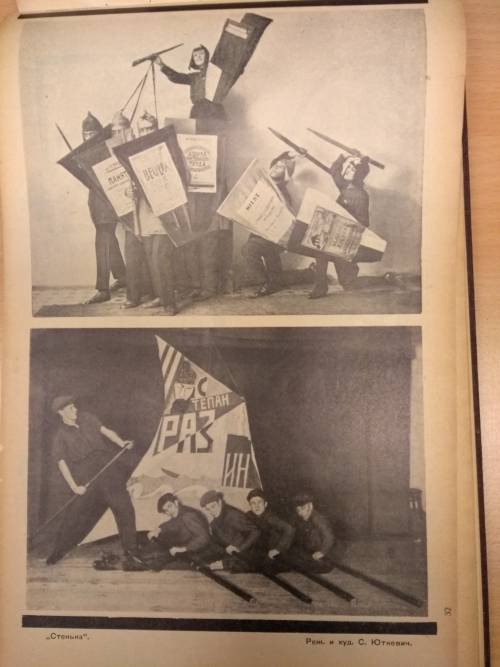 Flanagan attended several Blue Blouse productions in Moscow. In Shifting Scenes of the Modern European Theatre (London, 1929; shelfmark 011805.i.61) she notes: 'At Trade Union or Factory theatres, the Blue Blouses, workers by day and actors by night, perform original acrobatic plays'. She particularly recalls attending a production in which ‘three men and three girls glorify workers of the Army, the Navy, the farms, and factories’. [1] Rejecting elaborate props and sets, the actors energetically climbed imaginary rigging, planted imaginary crops and controlled imaginary machinery: 'Each motif reached its climax in a refrain taken up by the audience, a refrain consisting of the repetition of a single word, Comrade – half sung, half shouted: Tovarish! Tovarish! Tovarish! The effect of this exuberance was an amazing impression of having seen, not three men and three girls in an amateur song and dance, but a forest of ships with sailors in the rigging, a battalion of soldiers, a commonwealth of farm and factory hands all linked in a comradeship of work.' [2]

A decade later, in one of her earliest conversations with WPA director, Harry Hopkins, Flanagan suggested the Federal Theatre could produce a series of living newspapers involving many people taking on small parts. Hopkins immediately concurred and the Federal Theatre's principle Living Newspaper Unit was established in New York City soon after. Headed by playwright Elmer Rice – who, like Flanagan, had visited the Soviet Union – the Unit included theatre professionals and out-of-work journalists. From the outset it attracted controversy. Its first production – Ethiopia, about the recent invasion by Mussolini – was issued with a federal censorship order, prompting Rice’s resignation. And its third – Injunction Granted, with its pro-union/anti-big business stance – was criticised by federal government officials and closed early. Several living newspapers were hugely successful, however; most notably, One-Third of a Nation. Poster for One-Third of a Nation at the Aldelphi Theatre, New York City, 1938. Image courtesy of Wikimedia Commons.

Inspired by President Roosevelt's second inaugural address in which he recognised that one third of the nation were ‘ill-housed, ill-clad, ill-nourished’, the play dramatized the living conditions – the crime, disease, and powerlessness – endured by those in urban slum tenements. It also offered some solutions. After being workshopped at Vassar under Flanagan's direction in the summer of 1937, it was staged in cities across the United States, with revisions reflecting local conditions. In Philadelphia, for example, reference was made to a city tenement house that had collapsed two days before opening night.

Everywhere, reviews of One-Third of a Nation were positive. The Detroit Tribune declared it to be: ‘… of vital interest to every Negro living in Michigan’. The New Orleans Times-Picayune called it ‘timely and shrewdly staged’. In San Francisco it ran for nearly two years. And at New York’s Adelphi Theatre over 200,000 people cheered as the life-like slum housing went up in flames and the ‘The Consumer’ cried out to the government: ‘Can you hear me, Washington? Give me a decent home!’ 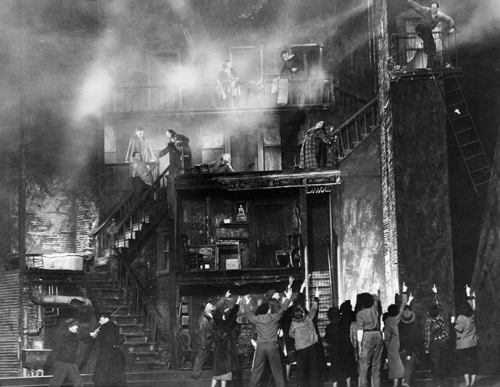 Photo of the New York set of the Federal Theatre Project's One-Third of a Nation, 1938. Image courtesy of Wikimedia Commons.

And it seems that Washington did hear, but in both a positive and negative way. Eleanor Roosevelt believed One-Third of a Nation achieved more than any speeches by her, Langdon Post (Head of the New York City Housing Authority), or even her husband ever could. But numerous senators were offended that their views on housing – taken word-for-word from the Congressional Record – were included in the play.

Flanagan later reflected in Arena: The History of the Federal Theatre (New York: Benjamin Blom, 1965; shelfmark X.900/3282) that: ‘Enemies made by the living newspaper were, I believe, powerful enemies, instrumental in the final closing of the project.’ [3] Yet, she never regretted her decisions. And she never lost her conviction in the power of this art form. Indeed, in 1948 she co-wrote a new play - E = mc2: A Living Newspaper about the Atomic Age - boldly declaring in its foreword: ‘The theatrical effectiveness of the “living newspaper” was conclusively demonstrated in the productions of Power and One-Third of a Nation. This latest edition of the "living newspaper" compares most favorably with the previous ones.' (New York: Samuel French, 1948; shelfmark 011791.c.47) 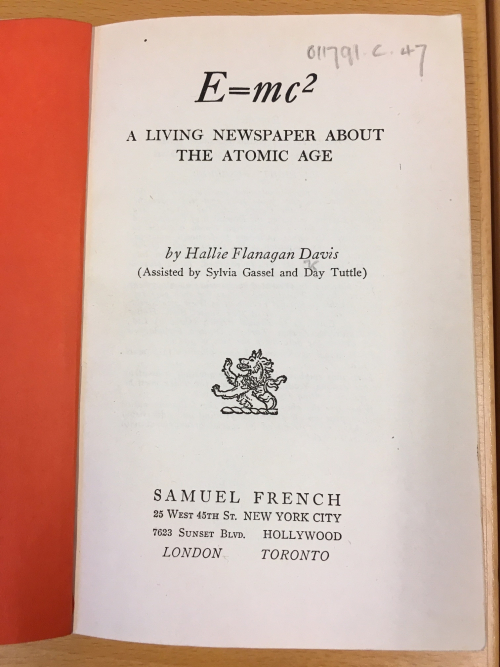 Finally, we wanted to share our recent realisation that Mary Eccles – co-founder of the British Library’s Eccles Centre for American Studies – was a student at Vassar College at the very time that Hallie Flanagan established the Vassar Experimental Theatre. Colleagues at the Centre knew about Mary's doctoral  thesis, 'Playwriting for Elizabethans, 1600-1605'. We were also aware anecdotally of her interest in avant-garde theatre. Yet, we had never connected Mary with Flanagan. With hindsight, it seems inconceivable that Mary would not have worked with, and surely been influenced by, this extraordinary, ground-breaking woman. In this vein, we will conclude with this wonderful, scandalous newspaper clipping about Mary (née Crapo) breaking conventions and enjoying a 'healthy drag' on a cigarette during her college years! 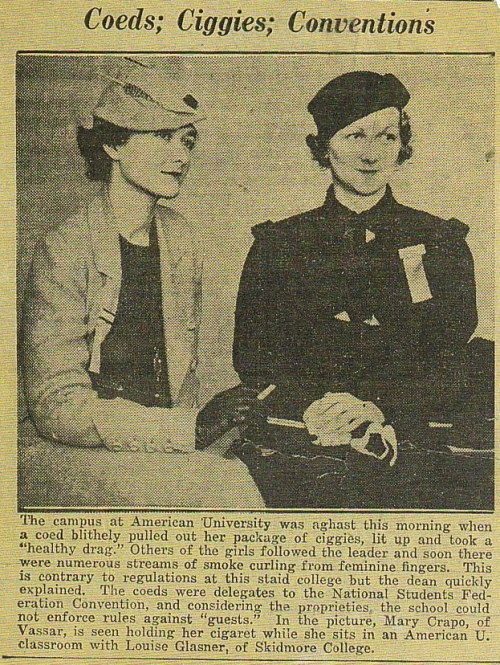