Seynabou Thiam-Pereira was a 2020 Eccles Centre Visiting Fellow at the British Library.

As an Eccles Centre Visiting Fellow at the British Library in September 2021, I was interested in material from late eighteenth-century British North America relating to American Loyalists and race issues in Atlantic Canada. The economic, political, military and social consequences of the American War of Independence had been major for the British empire. However, my focus was on the exiles from America and the relocation of thousands of Loyalists and disbanded soldiers within the empire.

After the outbreak of the war in 1776, 'Tories' - Loyalist inhabitants of the Thirteen Colonies - together with their slaves, Black and Native Loyalists, as well as disbanded soldiers, migrated to Atlantic Canada, the British West Indies, Great Britain and Botany Bay to seek refuge. The first evacuation took place in 1776 when Loyalists from Boston chose to settle in Nova Scotia. Formerly called Acadia, it had been a British territory since the end of French and Indian War when many New Englanders migrated there after the expulsion of the French Acadians. The largest evacuations occurred years later from Savannah, Georgia, and Charleston, South Carolina, in 1782, from New York City in 1783 and from St-Augustine, in East Florida until 1785.

Propaganda promoting the reception of Loyalists within the empire spread rapidly in pamphlets and newspapers. The image below, for example - 'The reception of the American Loyalists by Great Britain, in the year 1783' by H. Moses - details the variety of social status and ethnicities of the Loyalists. We can see Britannia opening her arms to American loyal subjects, to Natives and to Blacks. 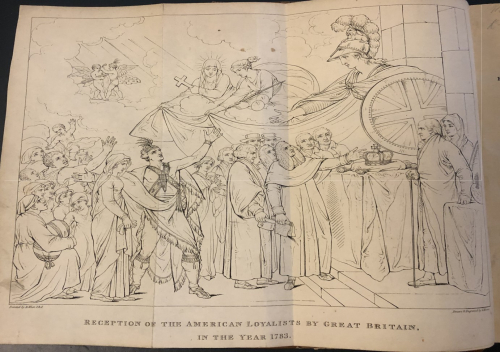 John Eardley Wilmot, Historical View of the Commission for enquiring into the losses, services, and claims of the American Loyalists... London, 1815. British Library shelfmark: 279.k.3

A wide range of documents illuminating these massive departures still exist, including petitions, muster rolls, letters, handbills, maps, and official registers either written by British officials or civilians. At the British Library, the Clarkson Papers and the miscellaneous letters and papers relating to American affairs, contain several petitions from disbanded soldiers and Loyalists to obtain land in order to settle in British American colonies.

Unsurprisingly, the question of land seems to have preoccupied the British government and the settlers throughout the War; not owning property meant being excluded from the shareholder status and its ensuing political rights. In 1782 a strong push began in Britain to offer land in Jamaica, Bermuda, St-Lucie, Barbados and the Bahamas islands to Loyalist planters from the southern colonies. The main arguments used were the possibility of bringing the slaves to the British West Indies which offered the accustomed warm climate and agricultural system. The opportunity to bring thousands of new planters or white settlers with slaves to the British Caribbean was essential in order to maintain the slave societies on these islands. But how could Free Black and Native Loyalists be integrated into this slaveholding system with their liberated, manumitted or free-born status? 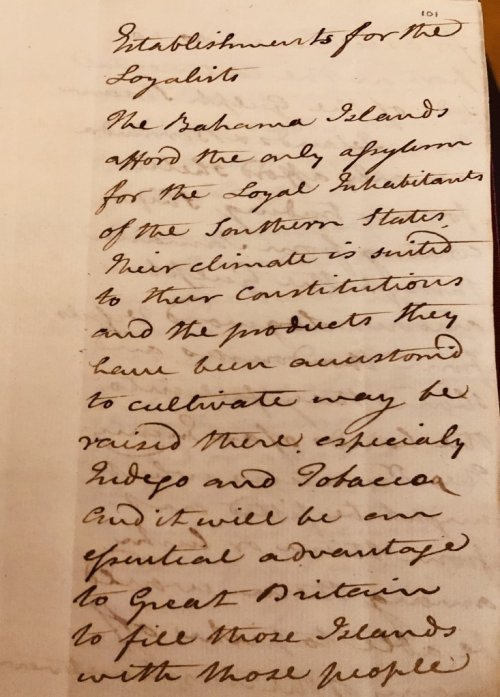 In order to accommodate this massive arrival of Loyalist settlers, towns were founded or extended and provisioned. Land had to be quickly divided into lots in order to be distributed to about 10,000 people in Jamaica, 5,000 in the Bahamas and hundreds in St-Lucie, Bermuda and Barbados. In some cases these Loyalists doubled or tripled the black and white population of the territories. One must bear in mind the challenge of rapidly organising the evacuation and resettlement of so many refugees while dealing with the peace treaty and trade regulations between Great Britain, France and the United States of America. If we take the example of Canada, muster rolls indicate the large number of disbanded troops, Loyalists and slaves who arrived in Upper/Lower Canada, and Nova Scotia. In 1784, while the province of Quebec was receiving more than 5,500 new settlers, Nova Scotia had more than 28,000 Loyalists including about a thousand slaves and 3,000 Black Loyalists (Native Loyalists were excluded from general musters). 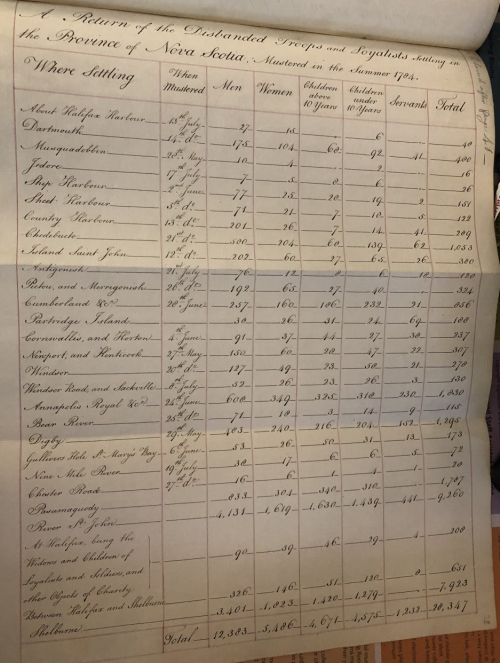 A general description of the Province of Nova Scotia, and a Report of the present state of the Defences ...by Lieut.-Col. [Robert] Morse, Chief Engineer in America', drawn up by direction of Gen. Sir Guy Carleton, Commander-in-Chief of H.M. Forces in N. America; 1783-1784, MS 208, f.23

Beyond the British empire, land acquisition was also a huge issue in the settlement of the Black Loyalists and the Black Poor out of Britain and Atlantic Canada to Sierra Leone, Africa, in 1787 and 1792. Promises of land - between five and twenty acres - were given by the Sierra Leone Company to the 1,190 coloured men, women and children from the Black Loyalists community in Canada willing to participate in the British project 'Back to Africa'. 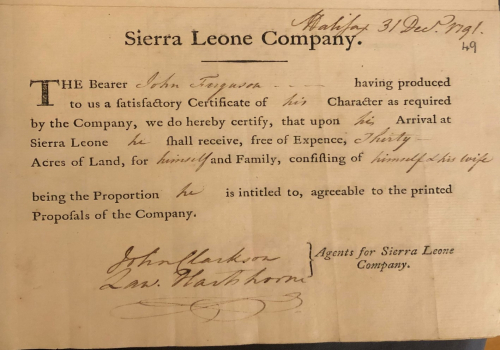 Land was also very much linked to economic concerns, since each Loyalist and their descendants were allowed to request financial compensation from the British government for any loss in the Thirteen Colonies. In the 1784 Land Claim Commission register extending to 1815, 47 Black Loyalists out of thousands of claimants gave lists of their lost properties in America. Consequently, the massive arrivals of new settlers shaped a Loyalist mosaic and participated in creating multi-cultural, multi-racial and multi-linguistic societies in the late eighteenth-century British empire.

These documents unquestionably permit a more detailed research of the Loyalist diaspora and the under-studied question of land distribution. Social studies of Loyalists can also encompass these records in order to examine a broader cultural outcome in modern British societies.