One of the most rewarding aspects of sourcing material to include in the exhibition Mughal India was the realisation that the British Library collections included so many unique historical texts. Several of these are fundamental to the study of Mughal history, but they have never been exhibited. Or.166, Princess Gulbadan’s autobiography, Aḥvāl-i Humāyūn Pādshāh (‘The Life of King Humayun’), is in fact the only known surviving copy, probably copied in the early 17th century, possibly from Gulbadan’s original manuscript. Unfortunately it is incomplete, ending abruptly in 1553. It was purchased by the collector Colonel George William Hamilton (1807-1868), who served in India from 1823 to 1867 latterly as Commissioner in Delhi. It has now been digitised and is available online here.

Princess Gulbadan, Babur’s daughter and Humayun’s half-sister, was one of a significant number of royal ladies who, despite living in a man’s world, played important roles in politics and government and were also famous as patrons of learning and the arts. In future posts I’ll be writing about some of the others.

Gulbadan was born in Kabul several years before Babur established himself in India. She followed him there in 1529 when he had set up court in Agra. She was only eight in 1530 when Babur died and was succeeded by her brother Humayun. In 1540, by now married, she went back to Kabul while Humayun struggled unsuccessfully to hold on to power in India. Some time after 1553, the date her memoir ends, she returned to India and we learn from Abu’l-Fazl’s Akbarnāmah that she set out on the Hajj in 1575, arriving home more than six years later after being shipwrecked at Aden, and then a further delay in Gujarat. She died in February 1603, an old lady aged 82 (lunar years). 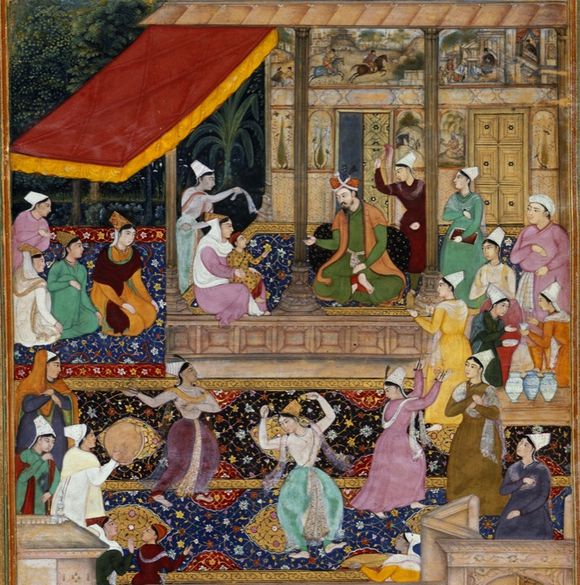 Celebrations at the time of Akbar's circumcision. This scene, from the Akbarnāmah, takes place in the women’s quarters. One of the ladies is almost certainly Gulbadan (Or.12988, f. 114r)

Gulbadan was highly educated. She could read and write both Chaghatay Turkish and Persian (unlike her husband whom she says could not read ‘savād nadārad’). We know that she had her own library from the fact that Bayazid Bayat, who also wrote an account of Humayun’s reign (IO Islamic 216—also on display), records that he gave her a copy of his work. In 1589 Akbar commissioned his chief minister Abu’l-Fazl to compile a comprehensive history of his reign and ordered anyone who remembered past events to copy out their notes and send them to Court (preface to Akbarnāmah). As a result, Gulbadan writes, “The order was given ‘Write what you know of the lives of Firdaws Makani [Babur] and His Majesty Jannat Makani [Humayun]’”. Admitting that her memories of Babur were not as good as they might have been, she drew on a wealth of family recollections and anecdotes to supplement what she knew from her father’s memoirs. For occasions when she was not present herself, for example during Humayun’s exile in Persia between 1543 and 1545, she relied on reports from his wife, Hamida Begum, and others who had been there.

Gulbadan’s memoirs give delightful glimpses into life in the women’s quarters. They include names and valuable details of the royal wives and children and other members of the family. She quotes Humayun, for example, when reprimanded for not visiting one of his wives earlier, as saying “I am an opium addict, and if it takes me a long time to come to see you, don’t get cross”. When her father built a pool at Dholpur, near Agra, he promised “When this pool is ready, I’ll fill it with wine”. However, Gulbadan comments, “since he gave up wine before the battle with Ranga Sanga, he filled it instead with lemon sherbet”. A description of an excursion to see the first rhubarb sprouting in the hills begins with an account of the ladies travelling by moonlight to Laghman from Balkh, chatting, telling each other stories and singing softly. Unfortunately they took so long to get ready the next morning that by the time they reached Koh Daman, the rhubarb leaves had already sprouted. Humayun was so angry about the delay that he made them write him letters of apology. 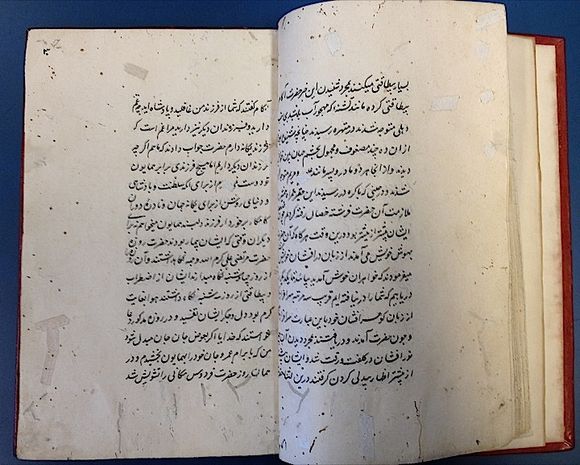 In the passage illustrated above, Humayun is seriously ill. His mother complains to his father Babur (Thackston 2009, p.14):

“You are an emperor: what grief have you? You have other children. My grief is that I have but one son.”

“Mahïm,” he replied, “although I have other children, I love none of them as I do your Humayun. It is for his sake that I have acquired empire, and I want the world to be bright for my beloved Humayun, the only one in the world, the rarity of the age—not for the others.”

While he [Humayun] was ill His Majesty kept the fast of Hazrat Murtaza Ali. This is a fast that is normally kept from Wednesday, but he was so disturbed and upset that he kept it from Tuesday. The weather was extremely hot. His heart and liver got over-heated, and during the fast he prayed, saying, “O God, if a life can be substituted for a life, I, Babur, give my life and soul to Humayun.” That very day His Majesty Firdaws-Makani became indisposed, and Humayun Padishah poured water on his own head, came out, and gave audience. His Majesty my father the Padishah was taken inside on account of his indisposition. For around two or three months he kept to his bed.

Posted by Ursula Sims-Williams at 6:21 PM