A recurring figure throughout the exhibition ‘Mughal India’ is Akbar’s influential administrator and adviser, the court historian Abū’l-Fażl.

Abū’l-Fażl ʻAllāmī was the second son of Shaykh Mubārak (1505-1593), a distinguished teacher and scholar who had migrated to Agra in 1543 from Nagaur in Rajastan. His older brother was the court poet Fayżī about whom we’ll be writing in future postings.

A precocious child, Abū’l-Fażl was already by the age of 15 familiar with traditional Islamic philosophy and science. However, not content with this, he actively sought the company of those of other faiths:

Sometimes a sympathy with the padres of Portugal pulled at my skirt. Sometimes a conference with the mubids of Persia, and sometimes a knowledge of the secrets of the Zendavesta [the Zoroastrian sacred scriptures] robbed me of repose, for my soul was alienated from the society both of the sobered and the (spiritually) drunken of my own land.

At 20 Abū’l-Fażl was contemplating a total withdrawal from society, but instead entered imperial service in 1574. His broad-minded and humanitarian views greatly influenced Akbar’s policies but were strongly opposed by the religious establishment. He took part in Akbar’s religious debates and helped to draft the famous decree (maḥżar) of 1579 which gave Akbar as emperor the right to decide any religious question on which qualified legal interpreters (mujtahidīn) were not in agreement. His prominence, however, led to rivalries and jealousies, and in 1602 Abū’l-Fażl was assassinated at the request of Akbar’s son Salīm (later to become the Emperor Jahāngīr).

150 years later, Shāh Navāz Khān (1700-1757) wrote in his biographical dictionary, the Maʻāsir al-umarāʼ, that while many had accused Abū’l-Fażl of being an infidel, whether a Hindu, a fire-worshipper, or an atheist, neverthless there were those who regarded him as a follower of ‘Universal Peace’ and a free-thinker who accepted all religions. His works remained extremely popular and were frequently copied right up until the advent of printing. The manuscript illustrated below is a good example. 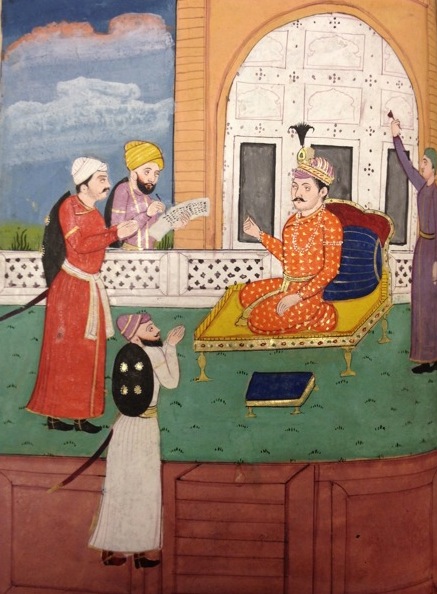 This painting from a 19th century copy of the Akbarnāmah shows Abū’l-Fażl, in the presence of Akbar, drafting the order (farmān) which established a new ‘Divine Era’. This solar calendar dated from 1556, the beginning of Akbar’s reign, and used the traditional pre-Islamic (Zoroastrian) Persian day and month names. It also introduced 14 festivals corresponding to the Zoroastrian feasts (Add.26203, ff 162v-163)

Abū’l-Fażl is best known for his monumental history the Akbarnāmah which Akbar commissioned in 1589 as an official history of his reign. The first two volumes covered Akbar’s predecessors and birth, followed by the events of his reign up to the the end of the 46th regnal year (1601/1602). A third volume, the Ā’īn-i Akbarī  ‘Regulations of Akbar’, is usually treated as a separate work. It provided an encyclopedic geographical, historical and statistical account of the empire. It was the first work of its kind, based on private memoirs, imperial archives, and sources in many different languages. Although excessively flattering in style, it remained an invaluable reference source until replaced by the gazetteers of the 19th century. 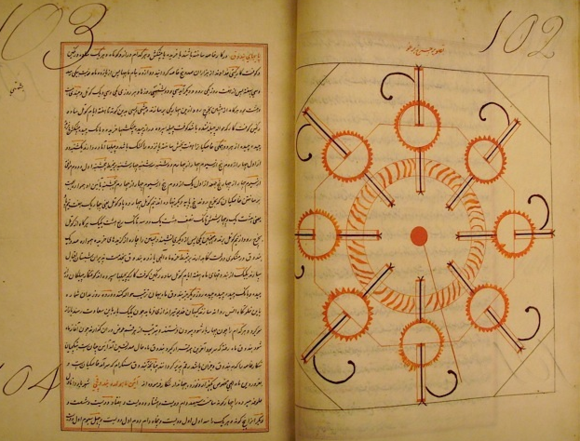 This 18th century copy of the Āʼīn-i Akbarī illustrates one of Akbar’s inventions: a special wheel to be turned by a cow, which cleaned 16 matchlock barrels in quick succession (Add.5645, ff. 60v-61)

An early work which has not survived was Abū’l-Fażl’s commentary on the Āyat al-Kursī  ‘Throne Verse’ (Qurʼān, Surah 2, verse 255). He completed it in 985 (1575/76) and presented it to Akbar apparently with much approval. Another of his works was the ʻIyār-i dānish ‘Criterion of Knowledge’, a ‘simplified’ version in Persian of the popular Arabic stories Kalīlah wa Dimnah (originally derived from the Sanskrit Panchatantra). Although several Persian translations existed already, they were, as Abu'l-Fażl wrote, "full of rhetorical difficulties" and  abounding in "rare metaphors and difficult words" (Āʼīn-i Akbarī, book 1, Ā'īn 34). 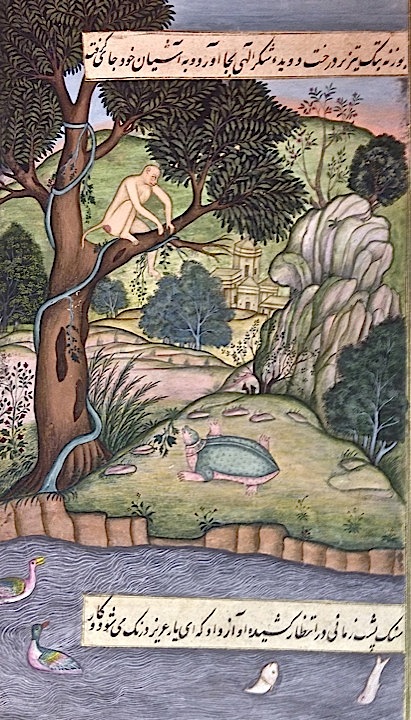 The story of ‘The monkey and the turtle’ tells of a cross-species friendship which ends in betrayal as a result of the plotting of the turtle’s jealous wife. The moral is that women are not to be heeded, in case they ruin a good friendship between men. Leaf from the ʻIyār-i dānish dating from c. 1600 (Johnson Album 54, 36)

Abū’l-Fażl also wrote prefaces for other royal commissions: a Persian translation of the Sanskrit epic the Mahābhārata, and the Tārīkh-i Alfī  ‘History of the Millennium’. Examples of both these works are included in the exhibition. Several posthumous collections of his letters have also survived: the Mukātabāt-i ʻAllāmī and the Ruqaʻāt-i Abū'l-Fażl.

All these three translations can be read online at: http://persian.packhum.org/persian/main

Posted by Ursula Sims-Williams at 3:19 PM