One of the greatest accomplishments of the Mughals was to initiate a new tradition of painting. Court historian Abu’l Fazl ibn Mubarak documented the emperor Akbar’s personal interest in the art of painting: ‘His Majesty, from his earliest youth, has shewn a great predilection for this art, and gives it every encouragement…. Hence the art flourishes, and many painters have obtained great reputation.’

Akbar established a formal artistic studio, led by Iranian artists brought to the subcontinent by his father Humayun. Here, painters and calligraphers collaborated and produced illustrated manuscripts and individual works including portraits. Primarily, these works were produced for the emperor’s private library, though princes and notable courtiers were also patrons of the arts.

Akbar invested considerable energy into the artistic studio that he established, known as the tasvir khana. It was led by eminent Iranian artists, but Akbar also recruited Hindu and Muslim artists from across the continent. At its peak, the royal studio employed more than 100 artists of varying skill. The initial eclectic range of styles harmoniously merged into a clearly identifiable Mughal style.

Major projects included the epic Hamzanama (Story of Amir Hamza); it took artists 15 years to complete its 1,400 paintings. Smaller projects included histories of the reigns of Akbar and Babur, Persian classics by the poets Nizami, Jami and Hafiz, as well as Persian translations of the Sanskrit epics Mahabharata and Ramayana.

Most of the individual paintings and illustrations found in manuscripts are painted on paper using opaque watercolours (mineral and earth pigments mixed with gum arabic as a binding medium), often highlighted with gold and/or silver.

Featured below is the colophon page of an imperial volume of the Khamsa (Five poems) by the poet Nizami made for the emperor Akbar. It features the features the portraits of the scribe 'Abd al-Rahim 'Anbarinqalam ('Sweet-pen') and the artist Daulat. This manuscript was copied by 'Anbarinqalam in 1595-96 and features 42 illustrations by master artists of the Mughal studio. 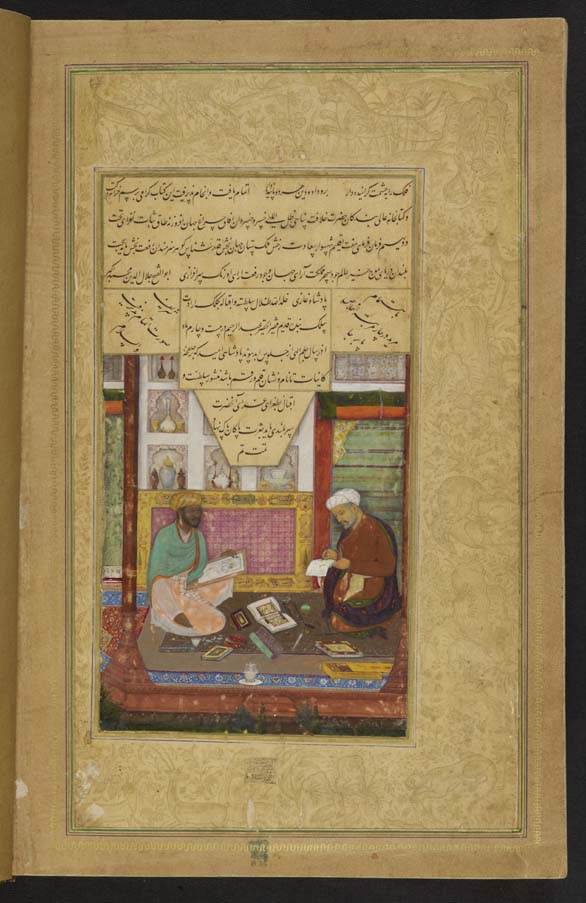