One of the items on exhibit in ‘Mughal India’ is an album containing examples of some of the best calligraphers of 19th century Delhi. Unfortunately we were only able to display one opening in the exhibition, which was copied by the last Mughal ruler Bahadur Shah ‘Zafar’ (ruled 1837-1857), famous as a poet and calligrapher. It contains two verses in Arabic in praise of the Prophet Muhammad, taken from the introduction to the Gulistan  ('Rose garden') by the 13th century Persian writer Saʻdi. In more recent times they have become famous after being sung by popular qawwali singers in Pakistan:

He attained the heights in his perfection;
he obscured all darkness with his beauty.
Beauteous is his every quality.
Invoke blessings on him and his Family. 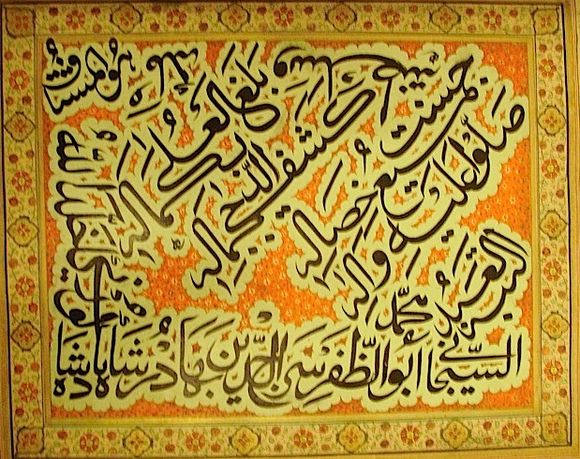 Equally impressive are examples by two of his sons. One contains verses in the shape of a lion, signed by Mirza Darabakht Vali 'Ahd (‘heir to the throne’) Bahadur. Mirza Darabakht (1790–1849) was Bahadur Shah’s eldest son and heir until his death of a fever in 1849. 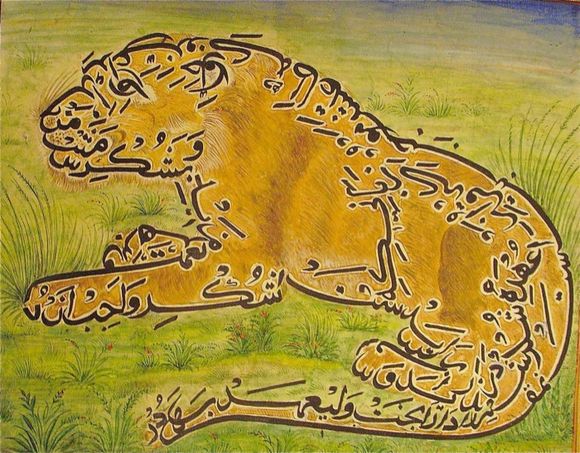 Darabakht’s death brought about a constitutional crisis when, by agreement with the British, his younger brother Mirza Fakhr al-Din (1816-1856) was appointed heir in 1852, contrary to the wishes of his father. Fakhr al-Din was also a poet and calligrapher, who died of cholera while still comparatively young. The example below, which includes the same verses as his father's above, is signed with his official titles, Mirza Muhammad Sultan Fath al-Mulk Shah Vali ʻAhd Bahadur, and is dated 1271 (1854/55). 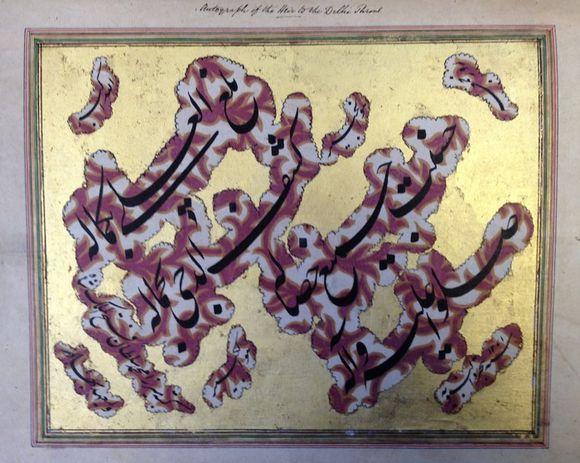 The album also includes two examples of calligraphy by Sayyid Muhammad Amir Rizvi 'Panjahkash', a famous calligrapher of Delhi who died in 1857. According to the Urdu writer Khvajah Hasan Nizami (1878-1955), he used to give away examples of his calligraphy to the poor who were able to earn very high prices from reselling them (cited by Jafri, p. 145, see below). 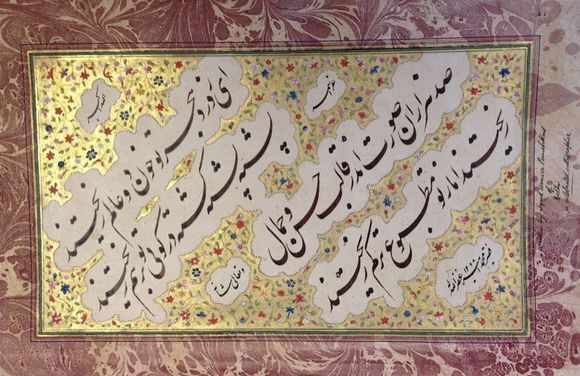 Other examples include verses in Pashto, Kashmiri and Punjabi by Muʻjiz Raqam Khan Qandahari.

This volume demonstrates the importance of calligraphy in 19th century Delhi where it is still regarded as an important art, though unfortunately lacking the popular appeal of former times (see Islamic Calligraphy: In search of a lifeline).

This volume was presented to the British Museum on 11 July 1856 by Lewin Bowring (1824-1910) who joined the Bengal Civil Service in 1843 and was private Secretary to the Viceroy from 1858 to 1862. The British Library is also fortunate in having his unique collection of biographical and genealogical material on Indian princes, chiefs, and other notables which was acquired by the India Office Library in 1959 (Mss Eur G38).

Posted by Ursula Sims-Williams at 1:21 PM