Keeping and training pigeons has been a universally popular pastime from time immemorial. The Mughals were no exception. Pigeons were bred at court and also imported from distant countries. Abu’l-Fazl (see previous blog) writes of Akbar’s pleasure at receiving ‘fairy-flying’ pigeons from the Mughals' homeland Farghana in Central Asia, along with a skilled pigeon-fancier, Ḥabīb (Akbarnamah, events of regnal year 31). 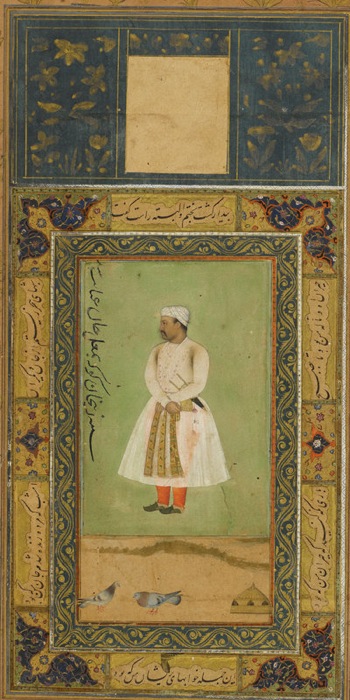 Portrait of Zayn Khan Kokah (c.1542–1601), Governor of Kabul. This portrait dating from around 1595 has been extended in the 17th century by the addition of some pigeons and a dovecote to make it a standard size to fit into an album (Johnson Album 18, 18)

In the Āʼīn-i Akbarī (‘Akbar’s regulations’), Abu’l-Fazl devotes a whole section (Book 2, Āʼīn 29) to amusements which include pigeon-flying (ʻishqbāzī), breeding and the different colours of the royal pigeons. Altogether there were estimated to be more than 20,000 pigeons at Akbar’s court, but only 500 were select (khāṣṣah). When the emperor moved camp, the pigeons were taken as well, with bearers carring their portable dovecotes. Pigeons were trained to do quite complicated manoevres: the wheel (charkh) “a lusty movement ending with the pigeon throwing itself over in a full circle” and turning somersaults (bāzī). A select pigeon could perform 15 charkhs and 70 bazis in one session. Although ordinary people were amused by pigeon flying, His Majesty, Abu’l-Fazl writes, “uses the occupation as a way of reducing unsettled, worldly-minded men to obedience, and avails himself of it as a means productive of harmony and friendship.” (Blochmann’s translation, see below).

Pigeons were also important in communications, with particular breeds being trained for this purpose. Abu'l-Fazl singles out the Raṭh pigeon as a good carrier. As recently as 2002 pigeons still played a role in the Orissa Police Pigeon Service (Independent, 21 March 2002). 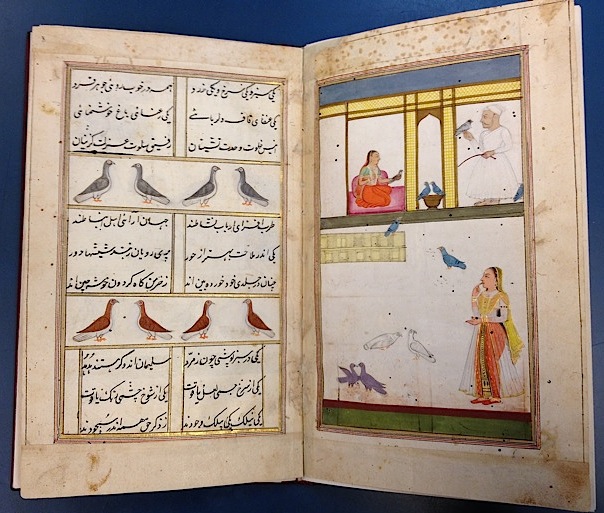 The Kabūtarnāmah, an illustrated pigeon manual copied in 1788, here showing a training session and some different types of pigeon (IO Islamic 4811, ff. 2v-3)

One of the most visually attractive items in the exhibition ‘Mughal India’ is IO Islamic 4811, ‘The book of pigeons’ (kabūtarnāmah), by Sayyid Muḥammad Mūsavī whose poetical name was Vālih. This work consists of a poem of 163 couplets, followed by a short prose treatise explaining the different types of pigeons, their colours and characteristics, and the art of pigeon-flying. It was written, as a gesture of friendship, for one Miyān Khūban who asked for an elegantly written account of pigeon flying.

Muḥammad Mūsavī Vālih was born in Khurasan, migrated to Hyderabad and then moved to Arcot (Tamil Nadu) where he died in 1184 (1770/71). He wrote several other works including a Sufi masnavi (poetic tale) called Najm al-huda, and a poem on cock-fighting (See Storey below, pp. 410-11). 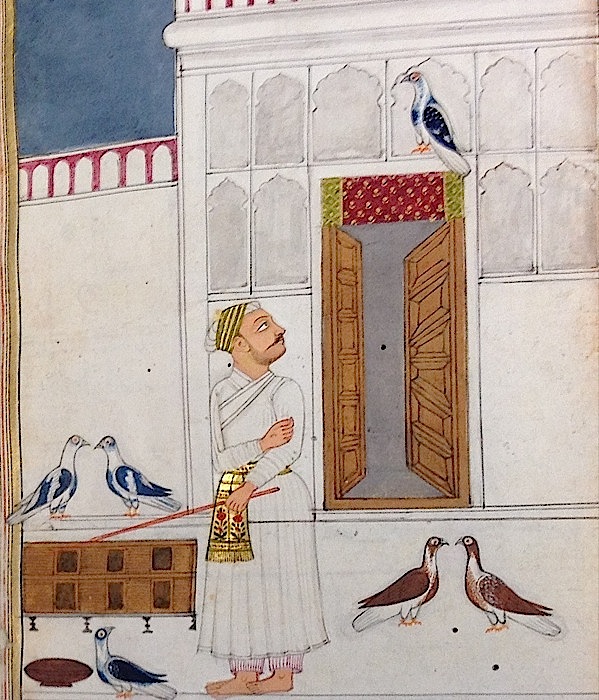 Charles Darwin (1809-82) was himself a keen pigeon fancier and set up a breeding loft at his home in the village of Downe, Kent. In the course of his research he corresponded with Sir Walter Elliot (1803-1887) a naturalist and ethnologist working in the Madras Civil Service. Darwin knew about Abu’l-Fazl’s chapter on pigeons (see Darwin and Elliot’s correspondence 1856-59): "I should mention that I have heard that such exist in the Ayin Akbaree in Persian (I know not whether I have spelt this right) but as this work is translated I can consult it in the India House [i.e. India Office Library, now part of the British Library collections!]". Elliot supplied Darwin with skins of various birds from India and Burma in 1856 and also sent him an English translation of Sayyid Muḥammad Mūsavī’s treatise which Darwin referred to twice in The variation of animals and plants under domestication. London: John Murray, 1868 (vol. 1 pp.141 and 155). 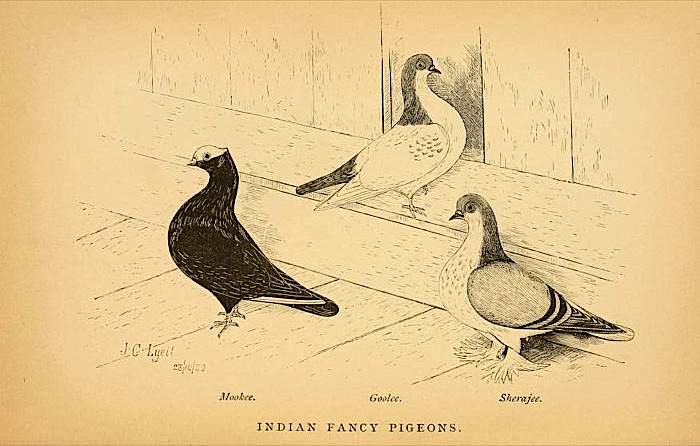 This fact was mentioned by James C. Lyell in his Fancy pigeons: containing full directions for their breeding and management, with descriptions of every known variety. 3rd revised ed. London: Gill, 1887. Lyell wrote to Darwin asking about Elliot's translation (p. 104): “but he [Darwin] replied that he was unable to find it in his library, and feared that, as it was in loose sheets, it had been mislaid. I then wrote to Sir Walter Elliot, asking him if he still had the original in Persian. He informed me it was lost, with his library, on the voyage home.” Fortunately Elliot rediscovered his translation and sent it to Lyell who published Sayyid Muḥammad Mūsavī’s introduction as a postscript to his 3rd edition (pp. 412-4).

Darwin’s collection of pigeon skeletons and skins, which he donated to the British Museum in 1867, are currently featured as ‘Museum Treasures’ of the Natural History Museum.

Posted by Ursula Sims-Williams at 9:09 PM