Imperial legal compendia: from the Mughals to the British

The Fatāwā ‘Ālamgīriyyah is a compendium of Ḥanafi fiqh (Islamic jurisprudence) whose composition was ordered by Emperor Aurangzeb.  Aurangzeb gathered the most prestigious Islamic scholars from the Mughal realms and, according to the historical chronicle, the Ma’ās̲ir-i ‘Alamgīrī, requested that they examine the legal treatises in the imperial library and collect all of the previous rulings of jurists (muftīs) in order to create a standardised reference for judges (qāżīs) throughout the Mughal Empire.  The Fatāwā ‘Ālamgīriyyah took eight years to complete (AH 1078-86/ AD 1667-75), engaged the skills of forty to fifty Islamic legal scholars under the head jurist, Shaykh Niẓām Burhānpūrī, and in its final form occupied over thirty volumes. This self-conscious attempt to update and standardise the norms of Islamic jurisprudence in the Mughal Empire served the practical purpose of creating an authoritative and comprehensive reference for judges, but also supported Aurangzeb’s political discourse of legitimising Mughal rule through championing the shari’a (Islamic law).  Originally composed in Arabic, the Fatāwā was translated into Persian during the Mughal period, and later into Urdu, the language in which it is widely disseminated and read today.  Prior to Ibn ‘Ābidīn’s 19th-century work on Ḥanafī jurisprudence, the Radd al-Muḥtār ‘alā Durr al-Mukhtār, the Fatāwā ‘Ālamgīriyyah, or as it was known in the Turkish and Arabic-speaking lands of the Ottoman Empire, the Fatāwā Hindiyyah (i.e., the Indian fatwas) was the most comprehensive work in the field. 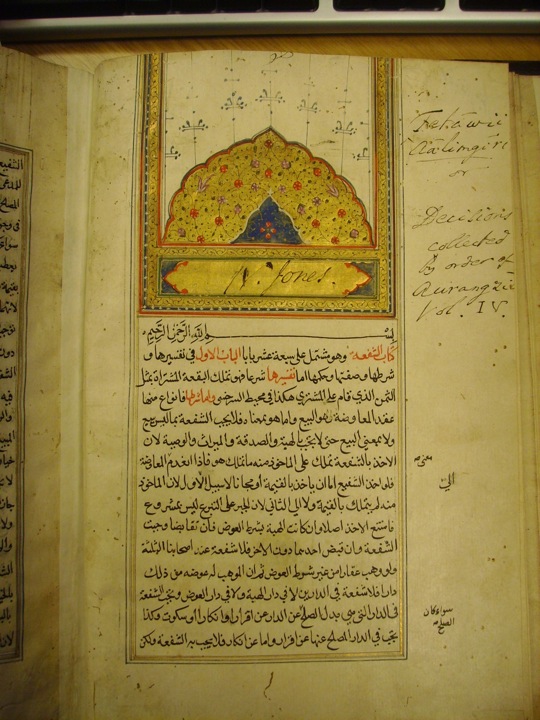 One volume of this thirty volume work which is currently on display in the exhibition ‘Mughal India’ is the section dealing with shufa‘ or the right of pre-emption. This deals with the sale of property, including land, and specifies who has the right of purchase before other buyers. For instance, the rules of shufa‘ stipulate that the co-owner of a property has the right to purchase the property before an outsider if the other co-owner decides to sell. Another illustration of the type of case dealt with in the Kitāb al-Shufa‘ is the sale of land to neighbouring property owner. If a landowner decides to sell a plot of land, the other landowners who share an adjacent border would have a right to purchase before an outside buyer. Not the most thrilling reading, but vitally important to maintaining law and order among property owners in the vast territories of the Mughal, and later British, empire in the subcontinent.

Sir William Jones: at the intersection of Islamic jurisprudence and colonial administration

This particular copy of the Fatāwā belonged to Sir William Jones (1746-1794), whose name is visible in the illuminated frontispiece pictured in the image above. Sir William Jones was appointed as a judge in the Supreme Court of Bengal in 1783 and is famous for founding the Royal Asiatic Society of Bengal in 1784. Jones had studied Arabic and Persian during his time as an undergraduate at Oxford; unimpressed with the quality of his lectures, he turned to native speakers to teach him. By the time he was appointed judge in the Bengal supreme court, he had already published a number of learned translations from Arabic and Persian (of the Mu‘allaqāt and the history of Nadir Shāh, among other works) as well a study of the Islamic law of inheritance. Jones’ career in many ways embodied the conflicting political currents of the age. On the one hand, he engaged in radical politics - radical for the time, that is, he penned political treatises in favour of universal male suffrage and defended the rights of the Welsh peasantry, as well as voicing support for the American revolution – while on the other hand he played a central role in the colonial administration of India. In addition to Arabic and Persian, he studied Sanskrit once he was in Calcutta and published a translation of the famous play by Kālidāsa, the Abhijñānaśākuntalā (‘The Sign of Shakuntala’), which exercised an enormous impact on the German romantic poets and philosophers of the period. In his capacity as a judge and colonial administrator under William Hastings, he was engaged in a project to codify ‘Indian’ law, an endeavour which echoed Aurangzeb’s original project of imperial legitimation in commissioning the Fatāwa ‘Ālamgīriyyah. As part of this project, he translated the Mānavadharmaśāstra (the Institutes of Hindu law: or, the ordinances of Menu) and wrote a work entitled al-Sirājiyyah, which was a study of Islamic law. The impact of Jones’ translation and linguistic theories was felt acutely throughout the 19th century, and the roots planted by his scholarship still exercise an influence on many current political and cultural constructions of the past.

S. Moinul Haq, Khafi Khan’s History of ‘Alamgir: Being an English translation of the relevant parts of Muntakhab al-Lubab with notes and an introduction. Karachi: Pakistan Historical Society, 1975

Posted by Ursula Sims-Williams at 1:50 PM