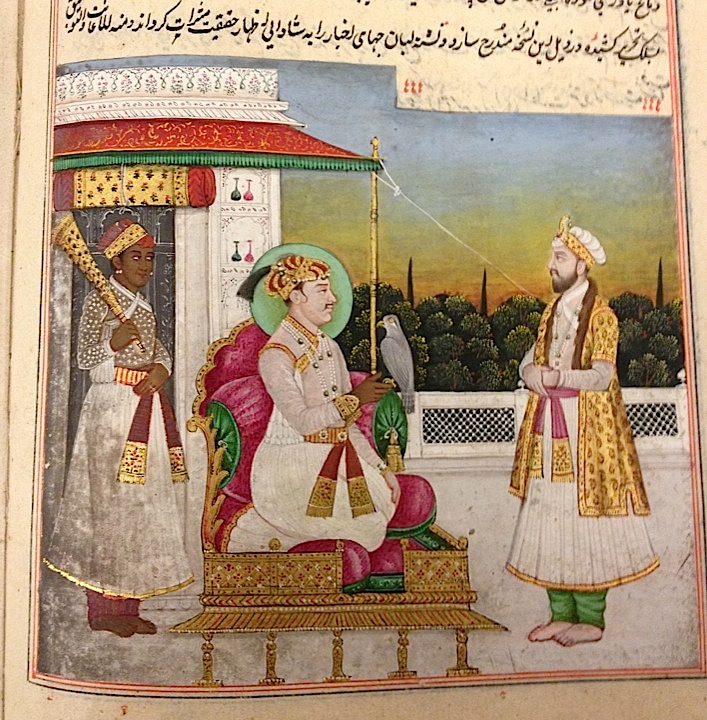 Jahangir seated on his throne. From an early 19th century copy of Jahāngir’s memoirs, the Jahāngīrnāmah or Tūzuk-i Jahāngīrī, edited by Muḥammad Hādī (Or.1644, f 11v)

Noruz was the occasion of partying and lavish exchanges of presents as described by Jahangir in his memoirs the Jahāngīrnāmah or Tūzuk-i Jahāngīrī. On March 21st 1619, the first day of his 14th regnal year, Jahangir participated in an entertainment organised by his son Shah Jahan. Jahangir was presented with “choice rarities and valuables from every region”. These included jewels valued at 156,000 rupees, a sword-hilt especially designed by Shah Jahan containing jewels he had himself set and cut, a miniature orchestra made of silver, and a golden elephant howdah (platform for carrying passengers). 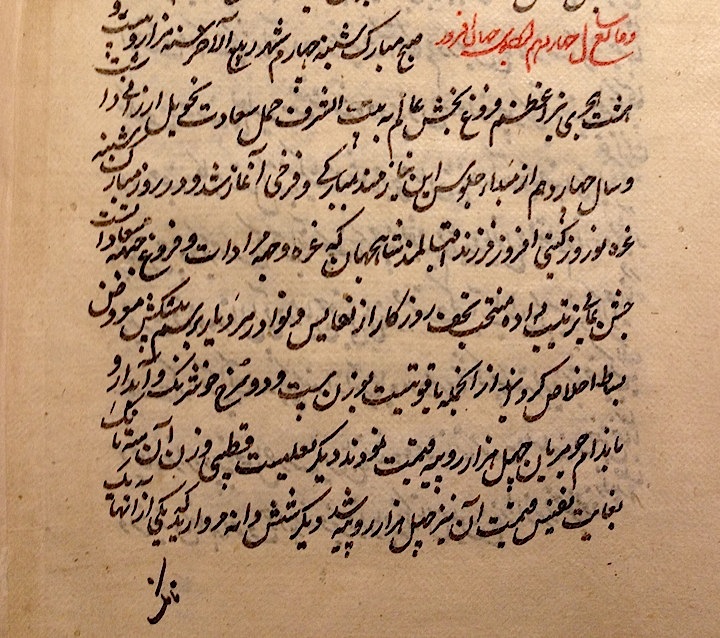 Description of the Noruz festivities at the beginning of the 14th year of Jahangir’s reign. From an 18th century copy of Jahangir’s memoirs (IO Islamic 164)

There were also two large elephants and five [others with] trappings from the offering of Qutbulmulk, the ruler of Golconda. The first elephant was named Dad-i-Ilahi. Since it entered the royal elephant stable on Nawroz, I renamed it Nur-i-Nawroz. It is an extremely fine elephant, with nothing to detract from its size, beauty, and magnificence. Since I liked its looks, I got on and rode it around the palace.
(Thackston, The Jahangirnama, see below, p. 297)

The festivities lasted 19 days during which more presents were given and the emperor granted many imperial titles and promotions.

Sir Thomas Roe independently gives an account of the Noruz festivities at the beginning of Jahangir’s 11th regnal year in March 1616, in which he describes the Emperor enthroned, sourrounded by paintings of English royals and nobility:

The manner is: ther is erected a Throne fower foote from the ground, in the Durbar Court, from the back wherof to the place wher the King comes out, a square of 56 Paces long and 43 broad was rayled in, and couered ouer with faire Semianes or Canopyes of cloth of gould, silke, or veluett, joyned together and susteyned with Canes so couered. At the vpper end were sett out the pictures of the King of England, the Queene, my lady Elizabeth, the Countesse[s] of Sommersett and Salisbury, and of a Cittizens wife of London; below them another of Sir Thomas Smyth, gouernor of the East India company. Vnder foote it is layd with good Persian Carpetts of great lardgnes. Into which place come all the men of qualetye to attend the King, except some fewe that are within a little rayle right before the Throne to receiue his Commandes. Within this square there were sett out for showe many little howses (one of siluer) and some other Curiosityes of Price. The Prince Sultan Coronne had at the lefte syde a Pauilion, the supporters wherof were Couered with Siluer (as were some of those also neare the Kings throne). The forme therof was Square; the matter wood, inlayd with mother of pearle, borne vp with fower pillars and Couered with Cloth of gould about the edge. Ouerhead, like a valence, was a nett fringe of good pearle, vpon which hung downe Pomegranetts, apples, peares, and such fruicts of gould, but hollow. Within yt the king sate on Cushions very rich in Pearles and Jewells. Round about the Court before the Throne the Principall men had erected tents, which encompassed the Court, and lined them with veluett, damask and taffety ordinaryly, some few with Cloth of gould, wherin they retyred and sett to show all theyr wealth; for anciently the kings were vsed to goe to euery tent and there take what pleased them, but now it is Changed, the King sitting to receiue what new years guifts are brought to him.
(The embassy of Sir Thomas Roe, vol. 1, pp. 142-4)

Thomas Roe, The Embassy of Sir Thomas Roe to the Court of the Great Mogul, 1615-1619, as narrated in his Journal and Correspondence; edited by William Foster. 2v. London: Hakluyt Society, 1899

Posted by Ursula Sims-Williams at 6:20 PM