A major diplomatic incident in 1695

Piracy and highjackings have been in the news recently, but in Mughal times they were such a problem that they several times brought about a complete breakdown in relations between the Mughals and the European countries.

During the 17th century, Surat was the most important port in Western India. It was a major trading centre and also the embarkation point for an estimated 15,000 pilgrims per year (see Hajj, below), travelling to the ports of Mocha and Jeddah on their way to Mecca. As early as 1613 Portuguese traders had siezed the Queen Mother Maryam Makani’s flagship Rahimi, carrying off her entire cargo and approximately 700 passengers to Goa (see Findley below). The resulting deterioration in Jahangir’s relationship with Portugal opened a window of opportunity for Sir Thomas Roe’s mission of 1615-18.

Acts of piracy continued in the years that followed, culminating in 1695 with the self-styled ‘Captain’ Avery’s capture of the Ganj-i Sawa’i, the largest of the Mughal ships, on its voyage home to Surat. This incident is described in some detail in the Persian Muntakhab al-lubāb by a contemporary historian Khāfī Khān who had several acquaintances on board. The ship was carrying fifty-two lacs of rupees in gold coins, the revenue from the sale of Indian goods at Mocha and Jedda. Despite having eighty cannon and four hundred muskets, it was captured and boarded by pirates (Moinul Haq’s translation, see below, pp. 419-25):

The whole of the ship came under their control and they carried away all the gold and silver along with a large number of prisoners to their ship. When their ship became over-loaded, they brought the imperial ship to the sea-coast near one of their settlements. After having remained engaged for a week, in searching for plunder, stripping the men of their clothes and dishonouring the old and young women, they left the ship and its passengers to their fate. Some of the women getting an opportunity, threw themselves into the sea to save their honour while others committed suicide using knives and daggers. 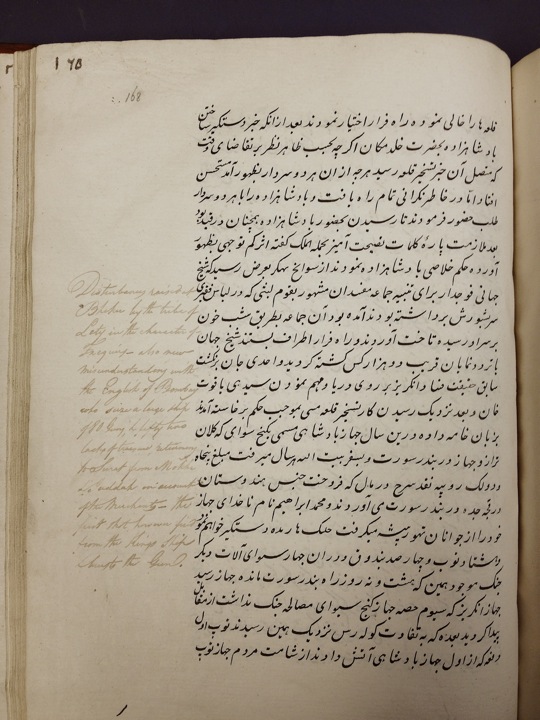 Avery’s act seriously jeopardised the East India Company’s trading activities. A huge reward was offered for his capture but he was never tracked down. The emperor Aurangzeb, on his part, retaliated by imprisoning the English traders at the East India Company factory in Surat and threatened a siege of Bombay. Khāfī Khān recounts the occasion when, during the hostilities, he was transporting goods from Surat to Rahiri (Raigarh) and had an interview with the governor of Bombay Sir John Gayer.

…the discourse turned upon different topics, pleasant and unpleasant, bitter and sweet; questions and answers were made. Of these questions one was about the cause of the arrest of his agents. Trusting that God and His Prophet would protect me, I said in answer: “You do not take upon yourself the responsibility of the shameful deeds committed by your men, which are condemned by all sensible men”.

Despite assurances that the pirates, though English, were nothing to do with the East India Company, Khāfī Khān reflected:

The revenue of the island of Bombay most of which is derived from betel-nuts and cocoa-nuts, does not amount to more than two or three lakhs of rupees. It is reported that the entire amount of trade of that wicked fellow [the Governor of Bombay] is not more than twenty lakhs of rupees. The source of the remaining unstable income of the English is the plunder and capture of the ships going to the House of God. At intervals of one or two years, they attack these ships, not at the time when, loaded with grains, they proceed to Mukhkhah and Jeddah, but when they return, bringing gold, silver, Ibrāhīmis and riyāls [non-Mughal currencies].

Henry Avery and his legacy

Born in the West Country, Henry Avery (or Every, also known as John Avery and ‘Long Ben’) was recruited as first mate on a ship which he highjacked and sailed to Madagascar. There he recruited a larger crew and embarked on a successful though short-lived career of piracy. After the capture of Ganj-i Sawai, Avery and his men sailed to the West Indies where they went their separate ways. Several crew members were caught and hanged but Avery was never heard of again. 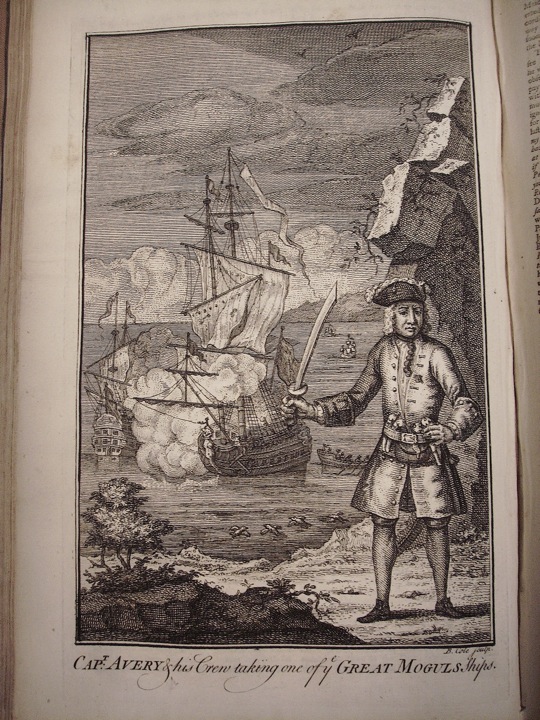 From A General and True History of the Lives and Actions of the Most Famous Highwaymen, Murderers, Street-Robbers etc., originally published in 1724 (this edition: Birmingham: R. Walker, 1742). The author, Captain Charles Johnson, has been identified with Daniel Defoe (c1660-1731)

Meanwhile Avery became a household name in 18th and 19th century Britain, synonymous with the spirit of adventure and life at sea. Numerous fictional and semi-biographical accounts of his life were published: The Ballad of Long Ben and The King of Pirates by Daniel Defoe, to mention just a few. In the earliest, The life and adventures of Capt. John Avery written by a pseudonymous Adrian van Broeck and published in 1709 (see below), Captain Avery seized not only Ganj-i Sawai’s treasure but the Emperor Aurangzeb’s granddaughter who happened to be on board. They married and sailed away to Madagascar where they lived happily (almost) ever after:

As time obliterates the most deep impressions of sorrow, so the lady was not long before she forgot the pleasures of her grandfather’s court, in the joys of her own, and found herself happily brought to bed of a son...while the female part of her retinue were no less backward in presenting their husbands with the fruits of their conjugal endearments.

Posted by Ursula Sims-Williams at 7:45 PM