A rare commentary on the Divan of Hafiz

Evidence of the Mughal emperors’ admiration for the Persian lyric poet Ḥāfiẓ of Shiraz (d. 1389) is to be found in several elegant copies of his Dīvān or collected poems, two of which (Or.14139 and Or.7573, see below) featured in the exhibition ‘Mughal India’ [postscript: and are now digitised, follow links below]. 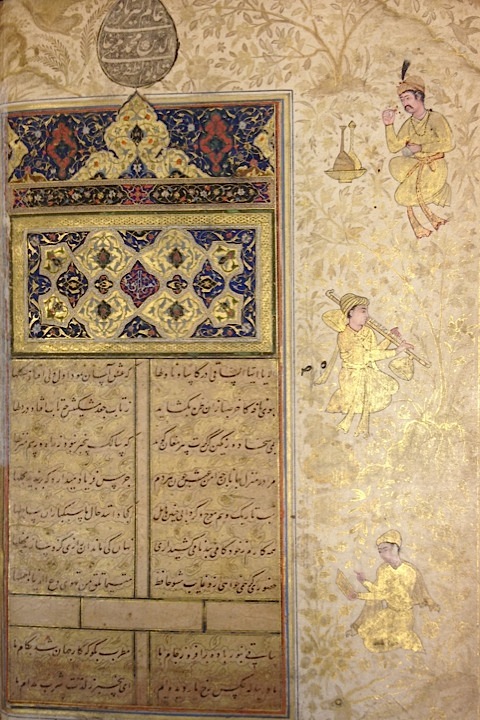 The initial page of a Mughal imperial copy of the Dīvān of Ḥāfiẓ which, according to a note by Shah Jahan, was copied by the master calligrapher Sulṭān ʻAlī Mashhadī. Probably dating from the end of the 15th century, the copy was remargined for Jahangir ca.1605. At the head of the page is Awrangzeb’s personal seal (Or.14139, f. 1v)

There exist several commentaries on his Dīvān. Some provide little more than literal definitions of difficult and/or uncommon words and expressions. Others are more profound, and one such was composed for Shah Jahan (ruled 1627-1658). The British Library is fortunate enough to have acquired, five years ago, a manuscript (Or.16039) of this rare text, formerly in the library of the late C.S. Mundy, a British Turcologist.

Decorations added for Jahangir to his pocket sized copy of Hafiz’s Dīvān (Or.7573, f.246v)

Baḥr al-firāsat al-lāfiẓ fī sharḥ Dīvān-i Ḥāfiẓ (‘The Speaking Sea of Insight, in explication of the Collected Poems of Hafiz’) is concerned with the inner meanings of some of the great mystical poet’s more esoteric verses. The author, ʻAbd Allāh Khvīshakī Chishtī, used the penname ʻUbaydī. As his name implies, he was a member of the Chishti Sufi Order, which to this day remains a major spiritual force in the Subcontinent. Verses in praise of Shah Jahan occur in the middle of the author’s preface (folios 2v-3v). In conformity with normal convention, the bayts or couplets are arranged and explained in alphabetical order of the rhyming letters.

Only two other manuscripts of this work are recorded, both being 19th century copies preserved at the Majlis-i Shūrā-yi Millī (National Assembly) Library in Tehran. The British Library manuscript is probably early 18th century and comprises 227 folios but is incomplete: it breaks off about two-thirds of the way through, and lacks the index found in the Tehran volumes.

By way of illustrating the content and flavour of ʻUbaydī’s work, here is a small section from the commentary on the famous first ghazal in the Dīvān, which begins with a hemistich in Arabic: Alā yā ayyuhā l-sāqī adir kaʼsan va navilhā / kih ʻishq āsān namūd avval valī uftād mushkilhā (‘Cupbearer, pass a goblet round and fill it up / for love at first seemed easy, but [now] come the problems’) 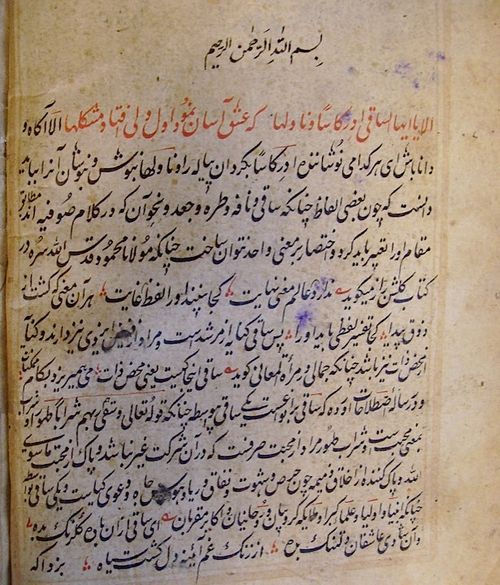 The beginning of ʻUbaydī's commentary on the Dīvān of Ḥāfiẓ (Or.16039, folio 4v)

Alā: be aware and knowing.  [yā ayyuhā l-sāqī] you who cause everyone to drink [spiritual] wine, [adir kaʼsan] pass around a goblet, [va navilhā] drink and give to drink. It is vital to be aware that certain words - such as sāqī (‘cupbearer’), nāfa (‘musk’), ṭurra (‘tresses’), jaʻd (‘lock of hair’), and so on - which occur in the parlance of the Sufis are to be interpreted according to [one’s own spiritual] standing; one cannot restrict them to a single meaning. As Mawlānā Maḥmūd [Shabistarī, renowned Iranian metaphysician and poet, d. ca. 1320], may God sanctify his spirit, puts it in his Gulshan-i rāz (‘The Flower Garden of Mystic Secrets’):

“The world of inner meanings is boundless.
How could its expressions be thought limited?
How could literal interpretations convey
secrets that spring from mystic tasting (zawq)?”

Sāqī (‘cupbearer’), then, alludes to the spiritual guide (murshid). It also refers the Divine outpouring [of mystical knowledge] and [on a higher level again] to the very Divine Essence (Zāt) Itself. As Jamālī [of Delhi, d. 1535, a much-travelled Sufi sheikh of the Suhravardī order, poet, and companion of the first Mughal emperor Bābur] puts it in Mir’āt al-maʻānī (‘The Mirror of Meanings’):

“Who is the Cupbearer here? The Essential Being Himself,
Who pours wine in the mouths of contingent things.”

It is stated in the Risāla-ʼi Iṣṭilāḥāt (‘Treatise on [Sufi] Terminology’ [the writer does not specify which of these he is citing]) that there are sāqīs of different kinds. The one who bestows wine without any intermediary is the one of whom [God] the Exalted says [in the Qur’ān]: “And their Lord gives them pure [and purifying: ṭahūr] wine to drink.” The wine in question represents love (maḥabbat): and ‘pure wine’ means pure, unalloyed love in which none besides [God Himself] has any share. It is devoid of any impurity in the form of love for aught but God, and it purifies one of base traits of character such as greed, lust, hypocrisy, ostentation, desire for status, and claiming to be astute (kiyāsat). The cupbearers who pour wine as intermediaries are the Prophets; the saints; the greatest religious scholars; and, from among the angels, the cherubim (karūbiyān), the sanctified (rūḥāniyān), and the foremost of those in proximity [to the Divine Presence].

The commentary on the first couplet (bayt) of Hāfiẓ’s famous poem continues over four more pages of the manuscript. The brief excerpt translated illustrates some of the ways in which this controversial poet has been interpreted by authors who espoused the mystical interpretation. Equally interesting, and more intellectually rigorous, are the commentaries on Ḥāfiẓ by Jalāl al-Dīn Davānī (d. 1502), a major philosopher and metaphysician who flourished in Shiraz a few decades after him. Interested readers are referred to Carl Ernst’s article (see below).

— The green sea of heaven: fifty ghazals from the Díwán of Ḥáfiẓ; translated by Elizabeth T. Gray. Ashland, OR: White Cloud Press, 1995

Hafiz and the Religion of Love in Classical Persian Poetry, edited by Leonard Lewisohn. London: I.B. Tauris in association with Iran Heritage Foundation, 2010

Posted by Ursula Sims-Williams at 1:05 PM