What were the Mughals' favourite books?

We are often asked what the Mughals' favourite books were. Unfortunately there is no complete record of the contents of the Mughal Library, but John Seyller’s comprehensive survey in 1997 of manuscripts containing Mughal valuations and inscriptions (see below) gives a fairly good indication. A clear favourite was the Khamsah (‘Five Poems’) written in Persian by Niẓāmī (d.ca. 1202). Other very popular works were the Gulistān (‘Rose Garden’) and Būstān (‘Scented Garden’) by the well-known Persian poet Saʻdī (d. 1291/92), the poems of Jāmī (d. 1492) and, of course, the Dīvān of Ḥāfiẓ of Shiraz (d.ca. 1389). The British Library collections suggest similar conclusions, with several fine examples of Mughal copies of these works.

In a recent post (‘A Jewel in the Crown’) I wrote about what was probably the most highly regarded imperial copy of  Niẓāmī ’s Khamsah (‘Five Poems’). However an equally beautiful example is Or.12208,  which was copied for Akbar between 1593 and 1595 by ʻAbd al-Raḥīm, one of the most celebrated calligraphers of his day. It originally contained 42 illustrated folios (2 double-page illustrations), 5 of which are now in the Walters Art Museum, Baltimore; the remaining 37 are still intact in the manuscript.  Altogether 22 different artists contributed to this work, all of whom were Hindu painters except for ʻAbd al-Ṣamad who came to India from Iran with the Emperor Humayun in 1555. 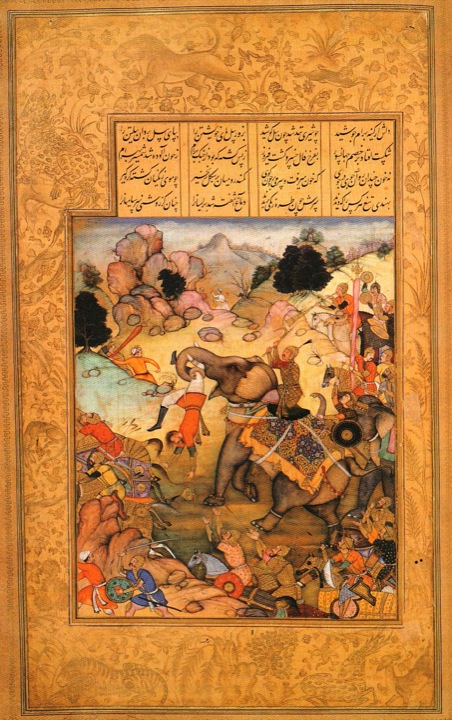 Examples of two elegant copies of the Dīvān of Ḥāfiẓ (Or.14139 and Or.7573) were given in our most recent post. A third (Grenville XLI) probably dates from between 1600 and 1605. Folio 3r contains a note, possibly by Jahangir, saying that the work was completed at Allahabad where he held court as Prince Salim. Another note, by Shah Jahan, records that it entered his library on the day of his accession on 25 Bahman [corresponding to 8 Jum. II] 1037 (14 February 1628, a similar note occurs in Or.6810 which you can see here). 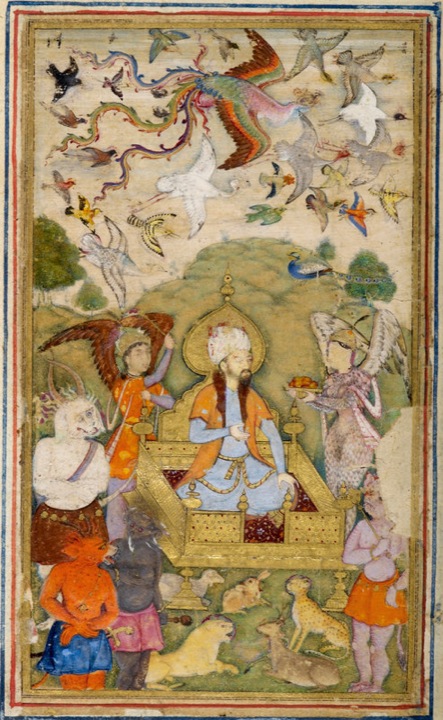 The Prophet Sulayman with attendant jinns and angels, surrounded by birds and animals (Grenville XLI, f.14r) 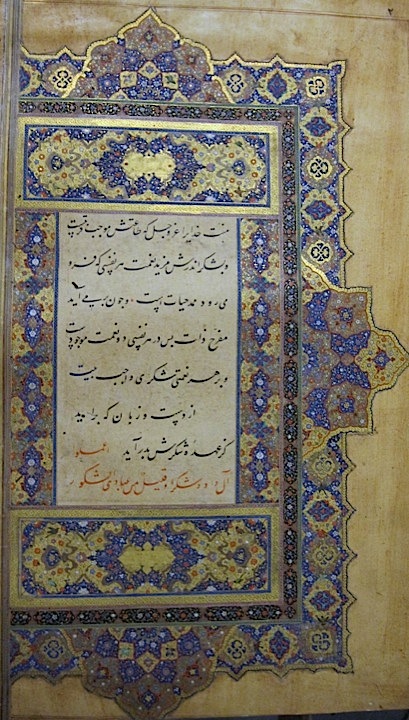 This copy of the Gulistān was copied in 975 (1567/68) by the calligrapher Mīr ʻAlī Ḥusaynī who describes himself in the colophon as a royal scribe (al-kātib al-sulṭānī) at the capital (dār al-khilāfah), Bukhara (Uzbekistan). Assuming that this is the genuine work of the famous master Mīr ʻAlī, it is the latest dated example of his work by 20 years (Thackston, pp. 154-55). Between 1531 and 1547/48 Mīr ʻAlī copied several notable manuscripts in Bukhara which subsequently passed into Mughal ownership (see John Seyller’s article below), including another Gulistān, which was copied for Sulṭān ʻAbd al-ʻAzīz Bahādur Khān (ruled 1540-1549). The miniatures in the British Library Gulistān include six Bukhara-style paintings which were commissioned apparently at Akbar's request (see dedicational inscriptions on ff. 30r and 91r). Four of these are ascribed to the artist Shaykhm Muzahhib — possibly Shaykhm, son of Mullā Yūsuf al-Haravī, one of the painters of Rawẓat al-Muḥibbīn, also partially copied by Mīr ʻAlī (see Seyller below, p. 339). The manuscript was 'improved' again in Jahangir's reign when seven more paintings were added, probably between 1605 and 1609. 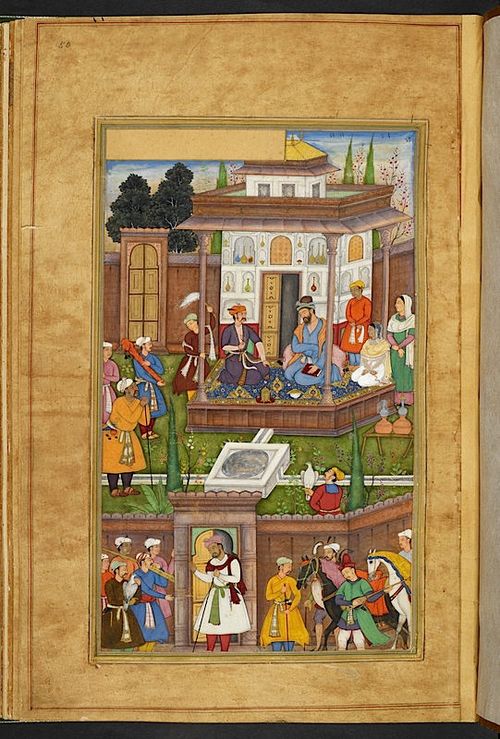 From Saʻdī’s Gulistān. The king visits the dervish, seated outside his house in a traditional chārbāgh garden, having abandoned his former way of life as a result of being introduced to worldly pleasures. Illustration by an unnamed artist, possibly Sur Das Gujarati (see Losty and Roy, p. 94), which has been added to the manuscript during Jahangir’s reign (Or.5302, f. 50r) 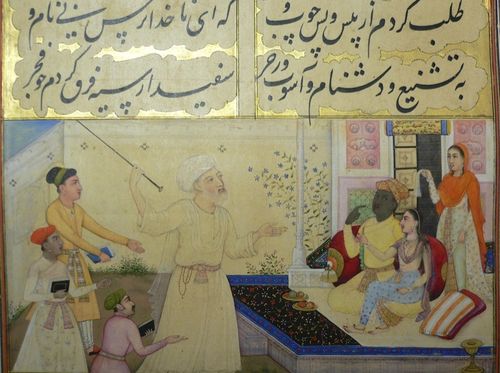 From Saʻdī’s Būstān. Illustration by an unnamed artist depicting a story illustrating the advantages of silence: an old man interferes and breaks up a mixed-race courtship, only to be severely reprimanded by the girl afterwards (Add.27262, f. 129r.)

Saʻdi’s verses were also often used as examples of calligraphy. Examples by the last Mughal ruler Bahadur Shah ‘Zafar’ (r. 1837-1857) and his eldest son Mirza Darabakht (1790–1849) can be seen in an earlier post ‘A 19th century album of imperial calligraphy’.

Posted by Ursula Sims-Williams at 11:09 AM