Abiola Olanipekun, an intern for the Social Sciences department at the British Library, recently spent some time researching British patrons of Indian art in response to the exhibition Mughal India: Art, Culture and Empire (ended April 2013).

Although the Mughal exhibition has ended, I was interested in exploring some of the key British figures that played pivotal roles behind some of the Mughal happenings. The English East India Company was founded in 1600, while Emperor Akbar (ruled 1556-1605) was still in power. Initally, the British were only interested in trading. However, as the Mughal empire weakened, the British gained substantial strength and exerted political control over the northern subcontinent.

Researching the East India Company, I was surprised to discover that notable characters such as  Richard Johnson, Warren Hastings, General Carnac and Sir Elijah Impey had strong associations and even (undeniable) lifelong linkages with the East India Company through their work and reputations. Some of the characters were very colourful, interesting and quite scandalous! The controversy, bravery of exploiting the law and the supposed reasoning behind these actions make this history all the more exciting!

My starting point was Sir Elijah Impey who born 13 June 1732 into a relatively poor family. Impey attended the Westminster School with Warren Hastings; the two became and remained intimate friends throughout his life. He attended Trinity College, Cambridge. Elijah was called to the bar in 1756. For a portrait of Impey, see the National Portrait Gallery's collection.

In 1773, Impey was appointed as the first Chief Justice of the new Supreme Court in Calcutta. His wife Mary set up their household in Calcutta and established a private menagerie. Mary also commissioned local artists to produce drawings of the rare animals she collected, including one of a pangolin, or a Chinese anteater. This spectacular drawing featured in the exhibition. 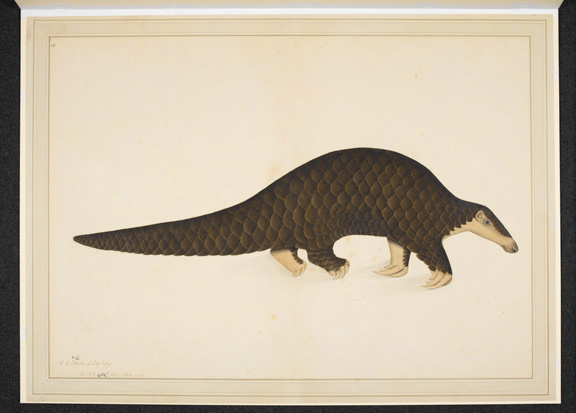 In 1775, Elijah presided at the trial of Maharaja Nandakumar, who was accused of forging a bond in an attempt to deprive a widow of more than half her inheritance. The results of this trial ensured that he went down in history and in 1789; both he and Warren Hastings were subjected to impeachment, for their handling of this case. In 1790, Elijah returned to parliament as the member for New Romney; he spent the next seven years as an MP before retiring to Newick Park. He died on 1 October 1809.