On 31 May 2013, Frances Wood retired as curator of the British Library’s Chinese collections. Some of us in Asian and African Studies have known her for almost the entire period and can honestly say that her retirement leaves a gap that is impossible to fill. This is a sentiment shared by her younger colleagues also, as well as readers and visitors to the Library over the years. Frances has on frequent occasions gone out of her way to help and advise, far beyond the call of duty, and her integrity, support and committed engagement to subjects ranging from minute Central Asian woodslip fragments to matters of personal concern has been a source of constant inspiration to us all. We'll miss her as a member of staff, but now that she'll be free of administrative duties, we look forward to seeing the results of her future collaborations and research.

In this post, Beth McKillop, now Deputy Director at the Victoria and Albert Museum, has written an appreciation of Frances and her work. Beth was a British Council scholar with Frances in Beijing in 1975/76 and worked as her colleague at the British Library from 1981 until 2004. 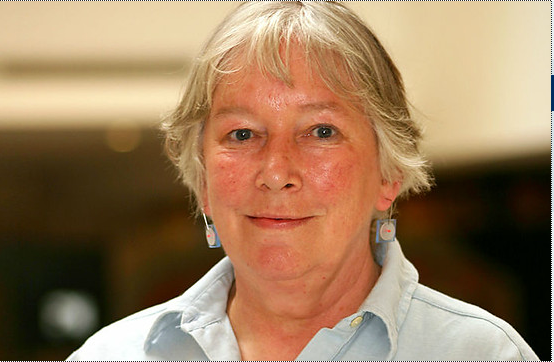 Frances Wood has recently retired, after more than 30 years first as curator, and later lead curator, of the British Library’s outstanding Chinese collections. She has overseen momentous changes in the understanding and treatment of the collection for which she has been responsible, as well as the physical moves of the collection from Bloomsbury to Blackfriars to St Pancras and (in part) to Boston Spa.

As a young curator, her exceptional energy and intellectual curiosity were already apparent. While researching and writing independently, she also shouldered responsibility for collective and departmental projects, including the British Library’s substantial contribution to the 1984 British Museum exhibition ‘Buddhism Art and Faith’. In the mid-1980s, she began the long movement towards collaborative work with Chinese and Japanese scholars which, years later, led to the founding of the International Dunhuang Project. That enterprise, hosted and directed from the British Library, was visionary and truly cross-disciplinary. Its origins lie in the pre-digital age, but Frances was quick to understand the potential of digital technology to link scholars, conservators and curators who needed to share collections and expertise of various kinds. The Dunhuang and other Central Asian collections are of course much more than a Chinese concern, but the Chinese section of the Library’s Asian collections, led by Frances, pushed the work forward, establishing and later sustaining, the IDP and the numerous scholars and curators who have worked with it. From the outset, Frances enlisted colleagues from SOAS, where she had worked before joining the British Library, to help bring expertise to the library. In the 1980s, SOAS Sinologists Sarah Allan and Roderick Whitfield facilitated visits from Chinese scholars, long before such contacts were straightforward. The first big achievement from these visits by Chinese Academy of Social Sciences historians and others was the 20 volume series  Dunhuang manuscripts in British collections co-published over several years by the Sichuan People’s Publishing House and the British Library. This large-scale set incorporated previously unpublished parts of the Stein Chinese manuscripts, documents that Frances and the Chinese visiting scholars had worked on with conservation support. While stressing Frances’ readiness to collaborate with Chinese scholars, mention should also be made of the Japanese researchers who visited regularly and who also uncovered much valuable new knowledge about the Dunhuang collections. 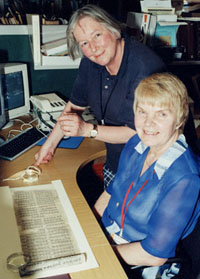 Important though Frances’ work on the Dunhuang collections has been throughout her career, her China interests have encompassed many other aspects of Chinese life and society. As a sought-after lecturer and broadcaster, she has done much to take ideas and debates from scholarly circles and present them to a wider audience. Did Marco Polo go to China?  argued that Marco constructed his famous account of travels to Yuan China from other travellers’ accounts, and caused controversy and dispute. Frances’ wide-ranging interests have led her into subjects as disparate as Cultural Revolution student life, the First Emperor, Treaty Ports, and even the translation of Dai Houying’s moving novel Stones of the Wall. Other strings to Frances’ bow have included the Blue Guide to China, reflecting encyclopedic knowledge of Chinese sites and monuments, gained over decades of travel, particularly in the 1970s to 90s. At one time Frances would accompany parliamentary delegations to China, led by the indomitable Lord Rhodes of Saddleworth, the only person to have persuaded Frances to wear a suit.

All those who know Frances are in awe of her published output, but probably most people outside the British Library are unaware of the huge amount of fundamental bibliographic work she has completed during her long career. As her colleague between 1981 and 1990, and again from 1993 until 2004, I would regularly accompany Frances to Guanghwa Bookshop in Soho to select new publications for the collection. Frances had the true bibliophile’s conviction that examination of the copy was the way to buy well. Before the advent of machine-readable cataloguing, we would carry heavy boxes of catalogue cards in a taxi, checking carefully to avoid selecting duplicates. We also worked doggedly through the boxes of Hong Kong copyright publicationsthat arrived in the Library with depressing regularity until 1997. These had to be sorted into material for full cataloguing, and other publications like children’s literature and other genre publishing which was assessed and forwarded to public libraries.

After the India Office Library and Records joined the British Library in 1984, and particularly after 1992 when the former British Museum Oriental Collections left Bloomsbury to join the India Office library at Blackfriars, Frances diligently catalogued the Chinese Buddhist texts in that collection. Her contribution to the exhibition 'Chinese Printmaking Today' (2003), the first major Chinese show in the St Pancras exhibition galleries, led to continuing support for the Muban Education Trust, the lender to the exhibition. Recently, she has published an exemplary account of the history and conservation of the Diamond Sutra of 868AD, jointly with Mark Barnard who was formerly a conservation manager in the Library. Frances’ years at the British Library have been notable for curatorial interests of an exceptionally diverse nature, and for energetic and extensively networked contributions to the China field in the UK and beyond.

This brief note barely scratches the surface of Frances’ interests and generous contributions to Chinese studies, which are familiar to scholars and students around the world. Frances’ expertise in architecture, for example, the subject of her London University doctorate, will doubtless continue to bring a steady stream of colleagues and enquirers to her door. Her research on maps, on illustration, and on export painting has been substantial. Her 2010 interview with Kirsty Young in Desert Island Discs gives some personal recollections of her long career. Her stewardship of the collection leaves an impressive legacy.

Posted by Ursula Sims-Williams at 3:23 PM