Jahangir’s Hafiz and the Madrasa Jurist

Mughal rulers’ liking for the renowned Persian lyric poet Ḥāfiẓ of Shiraz is reflected in a number of manuscripts (see our earlier posts ʻWhat were the Mughals' favourite books?ʼ and ʻA rare commentary on the Divan of Hafizʼ), among them a copy of his Dīvān believed to have been completed in 1582 by ‘Abd al-Ṣamad Shīrīn-qalam, one of the artists whom the emperor Humāyūn brought to Kabul – and later to Delhi – from his native Iran. Subsequently the volume was enhanced by order of Jahāngīr with nine illustrations. The greater part of this manuscript, including eight miniatures, is preserved at the British Library (MS. Or. 7573); the last part, including one miniature and the colophon, belongs to the Chester Beatty Library, Dublin (MS Ind 15, see Leach, pp. 328-31).

Among the interesting features of this manuscript is the relationship between the paintings and the text. Priority appears to have been given to providing a text to fit the paintings rather than vice versa: comparing the verses in Or. 7573 with those found in critical editions, one finds that in several cases a number of couplets have been deliberately omitted from the text panels on the illustrated pages (examination of the leaves in question reveals that there is no text underneath). The present writer is currently researching this subject for an article. 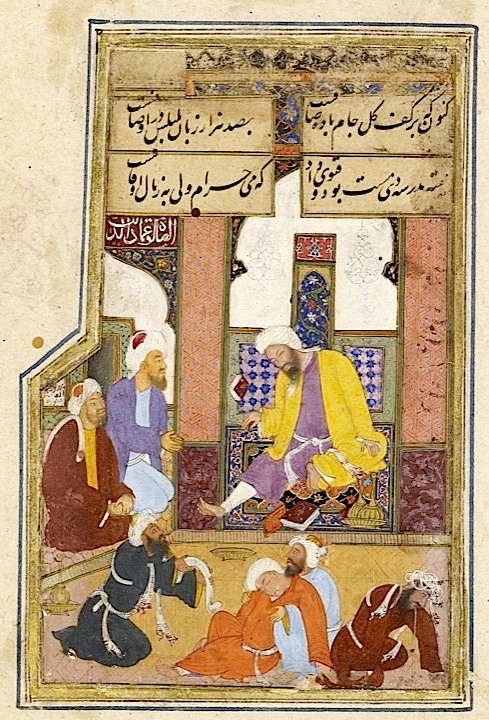 One of the most interesting miniatures, from the point of view of artistic interpretation of Ḥāfiẓ, is the first one in the manuscript, on folio 25r, which contains the artist’s signature in Arabic: ṣawwarahu al-‘abd Muḥammad Riḍā (‘painted by the slave [of God] Muḥammad Riżā’). This scene has previously been identified as ‘Imād al-Dīn Faqīh of Kirmān and his pupils in ecstasy (see Titley, p. 60; Losty and Roy, pp. 102-3 below). The inscription beneath the text panels reads al-Ṣalāt ‘imād al-dīn (‘Ritual prayer is the pillar of the faith [of Islam]’), a Hadith or Prophetic Tradition. The idea that the subject of the miniature is ‘Imād al-Dīn Faqīh of Kirmān originates from a misunderstanding of this inscription and of the second couplet on the page. ‘Imād al-Dīn ʻAlī Faqīh was a very orthodox Sufi master and poet of the 8th/14th century with an enormous following, and would have been horrified by any depiction of human beings, let alone that of the wine-sodden jurist in Muḥammad Riżā’s painting.

In this miniature the two text panels are contiguous, but the verse couplets are the first and the fourth of Ḥāfiẓ’s ghazal:

Now there’s a cup of pure wine in the hand of the rose,
the bulbul is singing its praises in (or, with) a hundred tongues.

Yesterday the madrasa jurist was drunk and gave this ruling:
Wine’s unlawful – but better than consuming waqf (charitable trust) assets.

Here Ḥāfiẓ shifts abruptly from setting a delightful scene, with the use of conventional lyrical imagery, to acerbic social criticism; such swift transitions are not uncommon in his poems. The first couplet is not relevant to the scene depicted except inasmuch as wine is mentioned. In this instance, however, being the opening bayt (couplet) of the ghazal it has been retained in the text. In Muḥammad Riżā’s painting it is the social criticism that counts, and it is reflected in aspects of realism that are not so commonly met with in Or. 7573 or elsewhere.

The faqīh or jurist at the centre of the painting has been described as being apparently on the point of passing out from religious, or possibly vinous, ecstasy. What we are actually shown is the (literally) drunk faqīh of the madrasa or Islamic college, who is honest enough not to deny his own wrongdoing but declares, as Ḥāfiẓ’s mouthpiece, that drinking wine is unlawful but better than consuming the assets of a waqf, or inalienable charitable endowment. The wrongdoing of the ostensibly righteous is a key theme in Ḥāfiẓ’s poetry.

In the painting, it may be that the seemingly righteous are represented by the two figures seated to the right (our left) of the faqīh, one of whom seems to be remonstrating with him. Possibly they have brought the miscreants before him in the expectation of having them sentenced to the ḥadd punishment (in other words, a severe beating) for drunkenness. Imagine their surprise at having the moral tables turned upon them by the representative of Sacred Law! Meanwhile, in the foreground two figures struggle to hold up or resuscitate a beardless young man whom they may have been introducing to corrupt practices. There are no signs of spiritual ecstasy, or of spiritual practices of any kind. That the opposite is the case is amply shown in the figure on the far right, possibly the brother of the one on the left. His turban has unravelled in picturesque style. What is more, he is quite unmistakably throwing up on the floor of the madrasa courtyard. 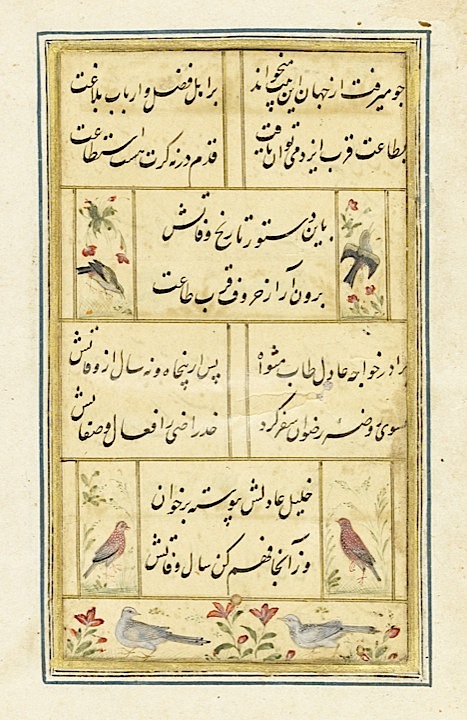 To conclude, and to bring out some of the themes that so appealed to the Mughal audience, here is an attempt at translating the entire poem, so typical of Ḥāfiẓ in the manner in which mysticism, hedonism and social criticism appear intermingled:

Now there’s a cup of pure wine in the rose’s hand,
the bulbul sings its praises in (or, with) a hundred tongues.

Call for a slim book of verse and head for the open air.
What time is this for madrasa, studying kashf (revelation) and Kashshāf (Qur’ān commentary)?

Cut yourself off from people. Learn from the ‘Anqā (a phoenix-like bird whose home is in the remote mountain chain of Qāf) what to do:
hermits are renowned from Mount Qāf to Mount Qāf (from one side of the world to the other).

Yesterday (a word Ḥāfiẓ uses not literally, but to refer to poetic, ‘mythical’ time) the madrasa jurist was drunk and gave this ruling:
wine’s unlawful – but better than consuming waqf (charitable trust) assets.

Dregs or pure wine?  The choice is not yours — but drink on!
All our Cupbearer (here meaning God) does is the essence of kindness.

The gabble of the pretentious, the vain thoughts of sycophants –
it’s all the same story of gold-embroiderers (refined craftspeople) and basket-weavers (būriyā-bāf: cf. riyā, ostentation; these latter are thought of as unrefined artisans).

Hold your peace, Ḥāfiẓ. And these fine points [pure] as red gold –
hold onto them: the town banker is the town forger!

Posted by Ursula Sims-Williams at 4:04 PM