Stitched up with Silk: Naqd ʻAli Beg’s journey to London in 1626

One of the oldest oil paintings in the British Library’s collections is a massive portrait of Naqd ʻAli Beg. It was commissioned by the English East India Company in 1626 and painted by Richard Greenbury (fl.1616-1651). In that year, Naqd ʻAli Beg came to London as the envoy of Shah ʻAbbas of Persia (r.1587-1629), to meet the British monarch, King Charles I (r.1625-1649).

His mission to England went so badly that he killed himself on the journey back to Iran in 1627. The circumstances behind his suicide relate to a violent quarrel that arose between him and Sir Robert Shirley at the court of Charles I. Both men claimed to be the true envoy of Shah ʻAbbas, claiming the other was an imposter, so the king ordered them to return to the Shah’s court and resolve their differences. The shame of failure was too great for Naqd ʻAli Beg to bear, hence his suicide.

It seems as if the East India Company was responsible for this terrible incident. According to a document in the British Library, Sir Robert Shirley was, in fact, the true envoy of Shah ʻAbbas, and had returned to England in 1624, two years before the arrival of Naqd ʻAli Beg. However, Shirley had angered the East India Company by trying to negotiate a monopoly for the trade in Persian silk with the King of Spain. Such an agreement would have undermined the silk trade with England. The East India Company’s response was to slander Shirley, and to put in place another envoy to the Shah of Persia, who would support trade with London. 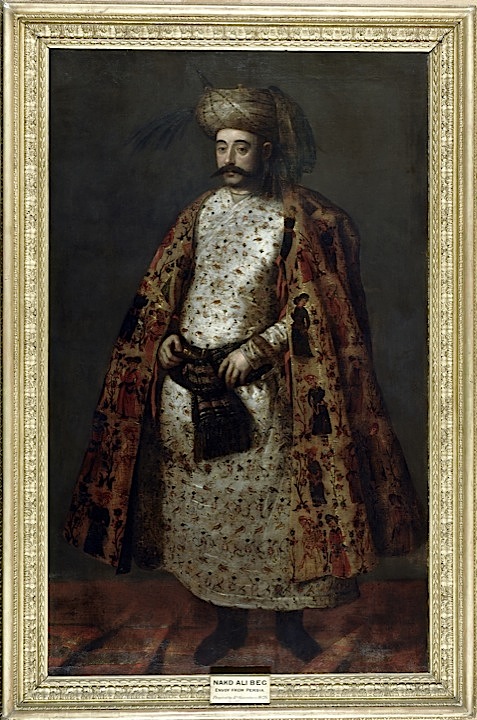 The portrait reflects the importance of the silk trade. Naqd ʻAli Beg’s adornments are all made of highest quality Persian silk. He wears a magnificent iridescent gown, which contrasts with his sash and turban. His robe is intricately embroidered with human figures resembling those found in Persian miniature paintings. The only object in the darkly lit room where he stands is a Persian carpet under his feet. Posing him amongst all these silk objects is surely not a coincidence. They suggest that the entire point of Naqd ʻAli Beg’s embassy was to undermine Sir Robert Shirley’s work, and secure Persia’s silk trade with the East India Company.

Richard Greenbury was commissioned to paint two portraits of Naqd ʻAli Beg for the East India Company. One was kept in East India House, and is now part of the British Library’s permanent collections. The other portrait, now lost, was given to Naqd ʻAli Beg when he left England in 1627, along with a silver basin and ewer valued at that time for £50. Even though Naqd ʻAli Beg’s embassy was a complete disaster, the East India Company gave him these expensive gifts. But these offerings weren’t enough to assuage the humiliated Persian envoy. Rather than face the Shah, when his ship reached the coast of Western India, Naqd ʻAli Beg poisoned himself by allegedly feeding on nothing but opium for four days.

Posted by Ursula Sims-Williams at 10:57 AM

Thanks so much for this posting. Of course Robert wasnt the only Shirley brother to have a punch-up with a Persian envoy, both claiming to be the real deal: his older brother Anthony did this in Rome. Can I ask, though, which document your post refers to (classmark if possible please), as I had a slightly different understanding of what went on and would like to follow this up.
Caroline Mawer