One of the manuscripts in the British Library’s Thai, Lao and Cambodian collections is unusual for its distinctive smoky smell, but its real significance lies in the fact that few such manuscripts survive following the Burmese occupation of the Ahom Kingdom in Assam (1817) and the First Anglo-Burmese war (1824-26).

Our manuscript (Or.2925) is the library’s only original manuscript in the Ahom language, a Tai dialect similar to Khamti and Shan that is believed to have been spoken by the founders of the Ahom Kingdom in the 13th century. By the 19th century, the Ahom language was regarded extinct, but it was possible to reconstruct it from surviving manuscripts and with the help of Ahom traditional priests (mo, or Deodhai). An Ahom-Assamese-English Dictionary was published in Calcutta in 1920.

Ahom manuscripts, often called “Ahom Puthi”—an Assamese term for religious books in the Ahom language—, usually contain legends and stories connected with the ancestry of Ahom kings. Hence these manuscripts were regarded as sacred and they were kept by the Ahom priests. 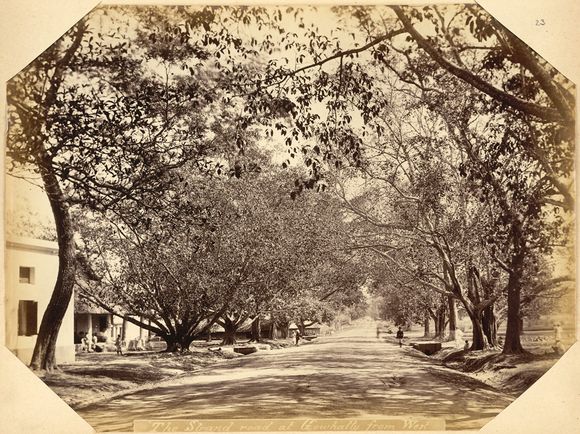 Strand Road in Gauhati (Guwahati), an administrative centre and seat of many Deodhai in the former Ahom Kingdom. Photo by Oscar Jean Baptiste Mallitte, 1860. (Photo 913/23)

The text is written in black ink known as mahi in Assamese. It is produced from the fruits of the Silikha tree (Terminalia citrina), sometimes mixed with extracts from false daisy leaves (Eclipta prostrata) and other natural substances. The writing material is made from thinly sliced pieces of wood of the Sanchi tree (Aquilaria agallocha), cut to a size of 24.5 x 7 cm. There are 36 folios altogether, with an additional front cover made from Sanchi bark that has no text on it. The front cover and the edges of all folios were rubbed with an unidentified substance which could be resin from a tree or yellow arsenic. The whole manuscript must have been stored for quite some time over a fire place to prevent it from being attacked by ants, mites and mould, hence the remarkably strong smoky smell which persists today.

The manuscript is undated, but considering the fact that such manuscripts would hardly have been produced during or after the First Anglo-Burmese war it can be assumed that it dates back to well before 1824. 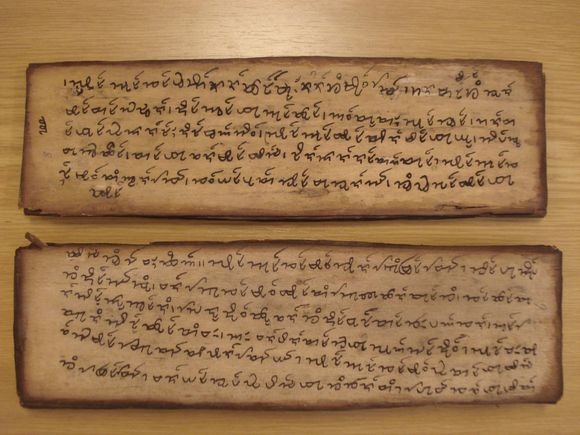 Folios 8 and 9 of the Ahom manuscript Or.2925 (British Museum foliation)

In a letter dated 6.9.1977, Dr J. N. Phukan, then teaching history at Guwahati University and author of various publications on Ahom language and history, wrote to Dr Henry Ginsburg, at the time Curator for Thai, Lao and Cambodian at the British Library, that the manuscript actually contains two fragmented texts. He was able to establish that the main part, folios 5-12 and 15-34 belong to a manuscript containing the legend of Leng-don, who in Ahom folklore is the Lord of Heaven who sent his grandsons Khunlung and Khunlai to rule on earth and to follow certain laws and rituals. Folios 2, 3, 4, 12 and 14 belong to another text dealing with Lak-ni, the Ahom method of year calculation. The remaining fragments were not identified. 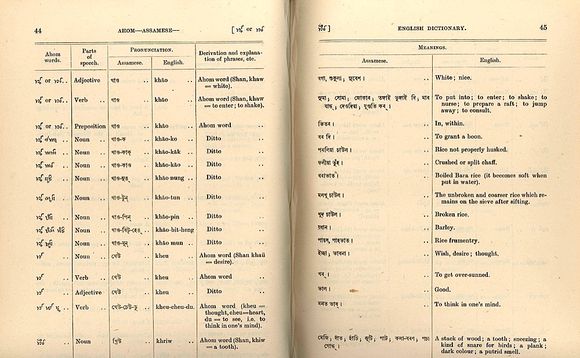 Ahom-Assamese-English Dictionary printed by the Baptist Mission Press in Calcutta, 1920.

Not much is known about the provenance of the manuscript. An inscription on the box made at the British Museum to store the manuscript in reads “MS in Chinese Shan. Brit. Mus. Oriental 2925”. A note written in black ink on folio 1 gives some more information: “B’t of M. Terrien de la Couperie through Cha’s Pembo 5 Oct. 1885”.

Terrien de Lacouperie (d. 1894) was a linguist and sinologist of French descent who started his career as a silk merchant in Hongkong. He later turned his attention entirely to the study and comparison of East and Southeast-Asian languages and scripts. In 1879 Lacouperie settled in London and was elected a fellow of the Royal Asiatic Society. Five years later he accepted a post as professor of Indo-Chinese philology at University College, London, and from 1886 on he also edited the Babylonian and Oriental Record. He worked temporarily for the British Museum, compiling the Catalogue of Chinese coins from the VIIth century BC to AD 621 (published 1892). His publications include The languages of China before the Chinese (1887), The oldest book of the Chinese, the Yh-king and its authors (1892), Beginnings of writing in Central and Eastern Asia (1894).

Lacouperie was particularly interested in languages of indigenous ethnic groups in China. He collected materials on their vocabulary and grammar, particularly of the Lolo language. The Lolo material, however, had originally been gathered by his close friend Edward Baber.

Edward Baber had gone to China as a student interpreter in 1866, followed by his appointment as Vice-Consul in Tamsui, Formosa in 1872. In 1879, he was promoted to the post of Chinese Secretary of Legation at Peking, and in 1885/6 he served as Consul-General in Chefoo (NE China) and Korea. He then became political resident in Bhamo, Burma, up to his death in 1890. Baber travelled extensively in  Central China and Upper Burma and built up a huge collection of documents, maps and indigenous language material.

It is possible that Lacouperie, who never himself travelled to Assam, Burma or South-Western China, might have received the Ahom manuscript from Edward Baber together with the Lolo material. However, in the absence of records this remains a matter of speculation. Only the initial catalogue record saying “Manuscript in Chinese Shan”, based on Lacouperie’s information, is a hint that Baber may have found the manuscript on one of his travels.

The other person mentioned in the acquisition note, Cha’s Pembo, who apparently brought the manuscript to the British Museum, may be Charles Pembo who worked for the Old Bailey in London as an interpreter for French, Lacouperie’s mother tongue, around 1900.

The manuscript was kept in the library of the British Museum until 1973, when the Department of Oriental Manuscripts & Printed Books was integrated into the newly established British Library. An important question it raises is whether or not the scent should be part of an item’s catalogue record. If so, how can we make sure that it is described in an objective manner since the sense of smell is a very individual experience? An even bigger question is how to conserve the scent of an item for future generations?

The British Library's Endangered Archives Program is currently helping to digitise a further 500 Ahom manuscripts from Assam (EAP373).  So far they have received images of about half. You can read about their progress so far on their recent blog Digitised Ahom Manuscripts arrive at the British Library.

Posted by Ursula Sims-Williams at 1:16 PM