This volume, which opens with an ornate rococo illuminated heading, is the original handwritten handlist of the manuscripts of Mustafa Paşa, preserved in the Mosque of Hasan Paşa. Neither the former owner nor the mosque is more specifically identified. According to an inscription, in 1230/1814-15 the library’s holdings were scrutinized under the supervision of Devletlü (His Excellency) Haccı ‘Ali Paşa. Of the 230 volumes, 135 were found to be present and 95 on loan to students. Many are common textbooks on the religious sciences. 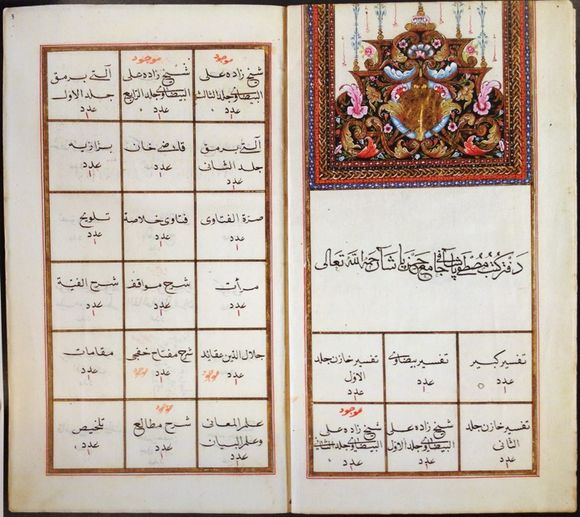 This defter is unusually concise. Each page has a grid of 18 squares, each entry stating only the short title (or a generic description such as ‘Treatise on Sufism’) or author (but rarely both) and the number of volumes; this is often insufficient to identify the text unequivocally. In some squares, the word mevcud (‘present’) has been added in red ink. The compilers exhibit a lower level of linguistic knowledge than one might expect. The defter contains entries on folios 2v-7v; blank ruled squares on 8r-10v; then 69 folios that are blank apart from the ruled gilt text frames (not counted in foliation, following British Library practice); then further entries from f. 11v to the top row of 20r; then ten more folios with only text frames.

It is curious that the written contents comprise two sequences, both with later additions, separated by so many blank pages. The handwriting of the best-written folios – 2v-5v and 11v-19v – is all by the same individual, although the contents of the two sequences differ. The volume may have been ordered to a fixed size and format, to accommodate future acquisitions.  There is an explanation. Examination of the second sequence shows that it represents the original writer’s attempt to re-order the entries by subject, beginning with Qur’anic literature before proceeding to Ḥadīth (Prophetic traditions), Fiqh (jurisprudence), and so on. Thus the Defter of the Mustafa Paşa Library, for all its deficiencies, reflects the care taken to maintain records of the holdings of a modest Ottoman mosque library.