Picking up the thread of previous blogs examining the patronage of legal compendia and mathematical translations at the Mughal court under Aurangzeb (r. 1658-1707), today’s entry deals with a little-known manuscript commissioned by the emperor himself. The manuscript in question is Delhi Persian 44, entitled Kitāb Akhbār al-Ma‘ād (The Book of Traditions on the Hereafter), which consists of a compilation of ḥadīth dealing with the topic of death and the afterlife, from funerals to the end of the world and the day of judgment. The ḥadīth (traditions spoken by the Prophet Muhammad and recorded by his companions and followers) are in Arabic, with a careful Persian-language exegesis that offers not only a translation and explanation of the content but also the correct pronunciation of the Arabic wording. 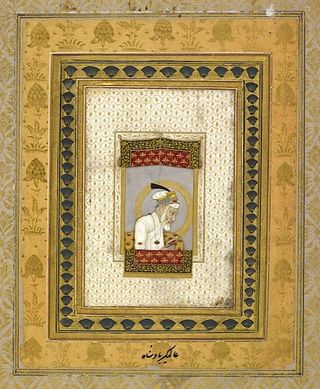 The author, Ghulām Muḥammad al-Satirkhī, names himself in the preface. He appears to have been a minor scholar who also contributed to the monumental Fatāwā ‘Alamgiriyyah (Nadvī, 98). The Kitāb Akhbār al-Ma‘ād seems to be a unique selection of ḥadīth made by the author, rather than a Persian translation of a previously existing Arabic-language compilation. In fact, several compilations of ḥadīth on the afterlife exist, but none seem to closely resemble the work at hand. For instance, the famous 15th-century scholar of Islamic law, Jalāl al-Dīn al-Suyūṭī, compiled ḥadīth relating to the obligatory prayers and rituals surrounding death and the state of the body in the grave, in a work entitled Bushrā al-Ka’īb bi-Liqā’ al-Ḥabīb and in a further work, the Sharḥ al-Ṣudūr fī Sharḥ Ḥāl al-Mawtā fī al-Qubūr. Al-Suyūṭī authored a separate work that focused on eschatological concerns; however, these ḥadīth are gathered in a separate volume unconnected with the previous ones, called al-Budūr al-Sāfirah. We shall see that this approach to separating ḥadīth on funerary practice from ḥadīth on the apocalypse and day of judgement is entirely different to the approach taken by Ghulām Muḥammad al-Satirkhī in his work. 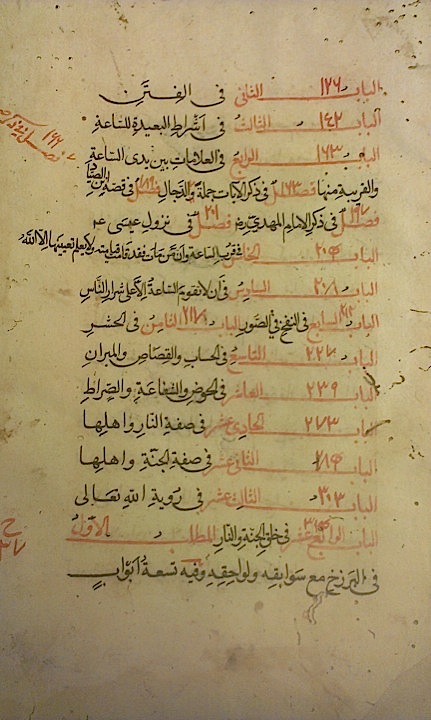 The Kitāb Akhbār al-Ma‘ād, in contrast to other ḥadīth compilations on similar topics, is much wider in scope. In addition to encompassing ḥadīth on rituals, funerary prayers, and the body in the grave, it also addresses questions on the apocalypse and last judgement. The author rarely cites the source of his ḥadīth, but when he does, it is typically one of the canonical Sunni ḥadīth collections (the six canonical ḥadīth collections and the musānid). While he gives the name of the first transmitter from among the companions of the prophet, he does not provide a full isnād (chain of tranmission). The work opens with the well-known ḥadīth that (among other things) it is obligatory for the Muslim to walk in the funeral procession of another Muslim, and continues to discuss how the body should be washed and wrapped in the shroud, along with similar issues of religious practice and legal requirement.

However, what is interesting about the Kitāb Akhbār al-Ma‘ād is that it expands into more esoteric topics in the second half of the work, attempting a universal scope when dealing with the hereafter. It addresses not just the obligatory actions and prayers of the Muslim surrounding death but also includes ḥadīth on barzakh, the liminal area between this world and the next, and numerous ḥadīth and tales associated with the apocalypse and end of days in the Islamic tradition. After the detailed description of the apocalypse - including the appearance of the anti-Christ (the Dajjāl) and Gog and Magog (Jūj and Mājūj) - the author presents several ḥadīth on how humans will be judged, and describes the characteristics of those who will dwell in heaven or hell.

Beyond its status as a manuscript of royal patronage that has previously not received scholarly attention, the work is of note for its wide selection of ḥadīth on all aspects of eschatology. It remains to be established whether the work represents a truly unique approach to the topic of the afterlife, or whether the author based his work in part on previous compilations. While it has been established that the author did not rely on al-Suyūṭī’s many compilations, a detailed study of the numerous ḥadīth collections on the afterlife would be required before drawing any firm conclusions (I am writing an article on this manuscript and its comparison with similar compilations – so watch this space for more information!). However, if we take the preface and conclusion of the manuscript at face value, in which the author claims that he was ordered by Aurangzeb to construct this compilation, we should ask why the emperor was interested in an all-embracing approach to everything dealing with death and the afterlife, from the wrapping of the corpse in the shroud until the final trumpet heralding the last judgement, and why, for that matter, he saw fit to order not only the compilation of this material, but also its translation and exegesis in Persian. The manuscript is dated 1089 AH/ 1678 AD, the same year that al-Satirkhī completed the work, so Aurangzeb (born in 1618 AD), would have been sixty years old when it was written. Based on pure speculation, could impending old age have spurred a greater interest in the afterlife, causing Aurangzeb to commission such a work? The author, in the preface, states that Aurangzeb's wish was to lead those who were negligent in their religion back to the staight path - so perhaps the extremely educated and pious emperor intended this work for a general audience rather than his own private reading.  Or perhaps he had a particular person in mind, a relative he viewed as 'straying from the path' and wanted to frighten back into line with a book about threats of torture in the afterlife. For the moment, it remains a mystery, but watch this blog for more akhbār of the ma‘ād.