The Crown of Kings: a deluxe Malay manuscript from Penang

One of the finest illuminated Malay manuscripts known is a copy of the Taj al-Salatin, ‘The Crown of Kings’ (Or.13295), which has just been digitised in full.  This ethical guide for rulers was composed in Aceh in north Sumatra in 1603 by Bukhari al-Johori, and contains advice on good governance.  This manuscript was copied in Penang by a scribe named Muhammad bin Umar Syaikh Farid on 4 Zulhijah 1239 AH (31 July 1824 AD).  It is in every sense a deluxe bibliographic production, with a red and gold leather binding.  There are two superb illuminated frames at the beginning and end of the book, while all other pages are set within multi-layered frames of black, red and gold ink.  The text is written in a very accomplished hand with a thin nib in black ink.  Rubrication – the highlighting of certain words in red – is used for a variety of purposes: for Qur’anic quotations, for words or phrases in Arabic, and for ‘paragraph words’ such as adapun or bermula, both meaning ‘then’, indicating a new section in the text.

Throughout the Muslim world there is a highly distinctive manuscript culture of books written on paper in the Arabic script, with decorated frames spread across two open pages and symmetrical about the gutter of the book.  Within these broad design principles regional preferences are clearly apparent, and it is often possible to guess the geographic origin of a manuscript purely on the basis of the shape, ornamentation and colour scheme of the double decorated frames. 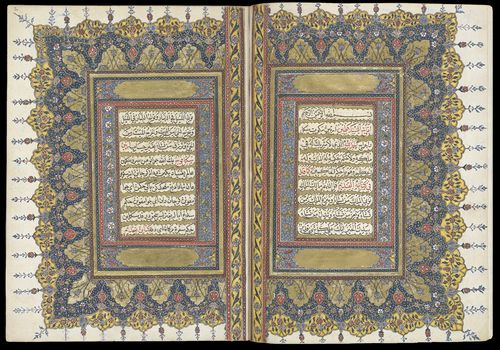 The opening illuminated frames of the Penang ‘Crown of Kings’ manuscript (see above) are technically stunning but atypical for a Malay manuscript, with many features that draw more heavily on the artistic vocabulary of Indo-Persian and Ottoman manuscript art.  For example, the gently undulating yet basically rectangular composition of of the densely decorated frames is at variance with the Southeast Asian tradition of frames characterised by strongly arched outlines on the three outer sides.  On each of the two facing pages, the decorated frames are ‘hung’ from a vertical decorated border or ‘pivot’ along the spine of the book, recalling the supports for a door or window shutter; this too is a feature rarely seen in Malay manuscript art. The palette, dominated by two shades of blue and gold, is also more typical of Islamic manuscripts west of the Malay world, while in Southeast Asia the main colours found are red and yellow.  Another very unusual feature is the use of white pigment in the illumination; throughout Muslim regions of Southeast Asia the colour white in manuscripts is invariably represented by ‘reserved white’, where the uncoloured ground of the white paper is manipulated as a fundamental element of the artist’s palette.  Finally, the lines of text on the first two pages are set within cloudbands edged with black ink against a ground of gold.  This is a very common decorative device in Ottoman, Indian, Persian and even Chinese Islamic manuscripts, but is rarely encountered in Southeast Asia. 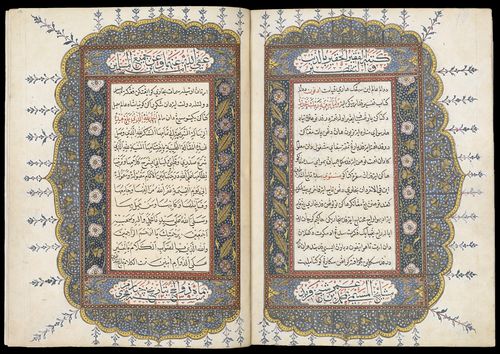 The final double frames (see above) are equally accomplished, but in a contrasting stylistic tenor.  The key difference is the arched outline of the gently graduated multi-lobed domes on the three outer sides, linking this manuscript to artistic traditions not only in the Malay world but also along Indian Ocean trading networks, notably in Oman and Yemen.  Gold is used more sparingly, and thus although the other components of the palette are the same, the overall effect is more variegated.  The colophon, with the name of the scribe and the date of copying – with, unusually, the Persian word for month – is presented in oval cartouches set within the frame above and below the textblock on each page.  The scribe was therefore familiar with Malay, Arabic and Persian, and was most likely of Indian descent.

The history of the peregrinations of this book – from Penang to Bombay and thence on to Brighton and London – can be partially reconstructed.  A flyleaf bears the inscription:

To the Revd. J. M. Rice, Brighton, from his brother, Ralph Rice, Recorder of Prince of Wales Island A.D. 1824.  This M.S. is a Malay story & was made at Pinang in the above year – with a hope, that it wd receive admission, into the library, of so renowned a Bibliomanist, as is the said J. M. Rice.
Ralph Rice, now one of the Judges of the – Court at Bombay.  Bombay, May 19, 1825

Sir Ralph Rice (b. ca. 1781-1850), served as the third Recorder or government legal officer of Penang from 1817 to 1824, and was later Senior Puisne Judge of the Bombay Supreme Court. He thus appears to have commissioned this manuscript in his last year in Penang, and from his new post in Bombay presented it to his older brother, the Revd. John Morgan Rice (b. ca. 1774-1833) of Brighton.  The manuscript also bears the bookplate of ‘Percy M. Thornton’.  Percy Melville Thornton (1841-1918) was a Conservative politician whose mother was Emily Elizabeth Rice, daughter of John Morgan Rice.  The manuscript was offered for sale at Sotheby’s in London on 9 December 1970, when it was purchased by the British Museum.  In 1973, together with the other books and manuscripts in the British Museum, it passed into the collections of the newly-formed British Library, and has now been digitised along with other Malay manuscripts in the Library.

Posted by Annabel Gallop at 2:28 PM