Early studies of the Malay language

Among the Malay manuscripts in the British Library collections which have been digitised and can now be accessed online are several studies of the Malay language by European scholars.

The earliest is a Malay grammar by William Mainstone, who served with the East India Company in Banten, Makassar and Jambi in the 17th century.  Mainstone has also been identified as the owner of a Malay manuscript of the Hikayat Muhammad Hanafiah in Cambridge University Library.  In 1682 he compiled a ‘Gramatica Mallayo-Anglica’ which is now in the Bodleian Library, Oxford (MS Ashmole 1808), but the British Library holds a copy (Add. 7043) made by John Haddon Hindley (1765–1827) in the early 19th century (although undated it is written on English paper watermarked ‘G Jones 1805’).  Hindley was librarian of the Chetham Library in Manchester, where he was inspired by the rich collections of Oriental manuscripts to study Persian, which may have awakened his interest in Malay.  In copying out Mainstone’s grammar, Hindley appears to have deliberately left blank pages in between, on which he could practise writing a few Malay words. 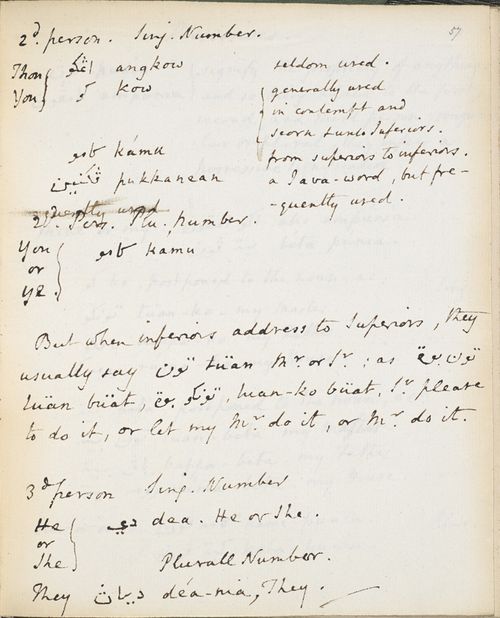 Next in date are two Malay vocabularies, contained in Egerton 933.  The first item in this composite volume, occuping ff.1r-23r,  is a romanised Malay and English vocabulary entitled Kitab Malayo, compiled by ‘F.E.’ and dated 1731.  A second Malay item in the manuscript, on ff. 27r-31v, is a work entitled Ingatan Deri Pada Commissaries Gouverneur, Ingatang dery Bahasa Engres dan bahasa Malaijoe. 1815.  Together with a Malay and English vocabulary and phrasebook is a diary of events for the month of Oct. 1815, called Ingatang dery apa jang suda djadij harij-harij, including the arrival of news of the escape and return to France of ‘Bonapartij’ and the activities of several Dutch and Englishmen.  Nothing is known of the authors of either work.  The volume was previously in the library of Dr Adam Clarke (1762-1832), a Methodist minister and noted Biblical and Oriental scholar, some of whose manuscripts were acquired by the British Museum in 1842. 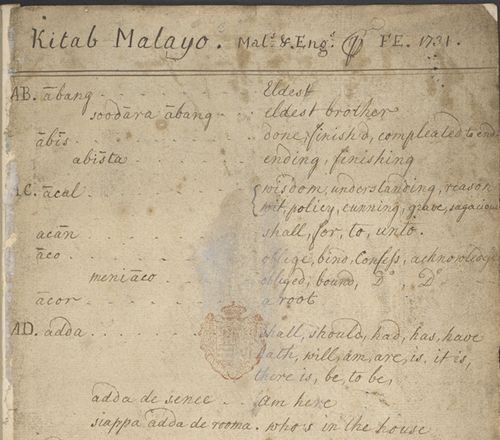 The last manuscript, Or. 4575, is a  romanised French-Malay vocabulary, probably compiled in the early 19th century.  At the end of the volume are two pages with Malay pantun (quatrains), the last of which is the following (in modernised orthography):
kura-kura dalam perahu / kalau ginkgen mati bediri
pura-pura tidak mau / gelap buta datang sendiri
In the boat the turtle lies / the ginkgen expires if placed upright
she pretends to despise / but willingly comes at dead of night 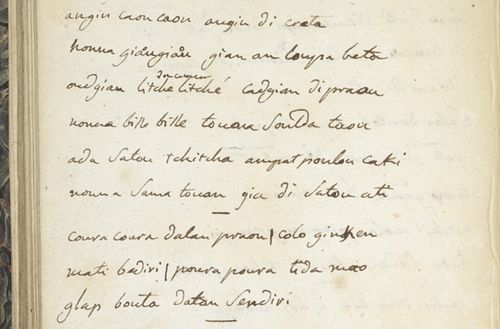 The volume is accompanied by a letter from Sir Woodbine Parish to a Revd. W. Barnes of Dorchester, sending him ‘the vocabulary of a South American language – though of what language I cannot say – I obtained it accidentally without any further account of it’ (f.3r).  Parish (1796-1882) was a British diplomat active on the continent in the aftermath of the Napoleonic wars, and who later served in Argentina.  William Barnes (1800-1886) was a Dorsetshire poet, and Parish’s gift of the mysterious unidentified vocabulary can be explained by Barnes’s profound interest in philology and etymology: his Philological Grammar of 1854 draws examples from more than sixty languages.

Malay manuscripts from the India Office collections due to be digitised in 2014 include word lists collected by Thomas Stamford Raffles and John Leyden, and a proof copy of Thomas  Bowrey’s 1701 dictionary of Malay, with manuscript annotations by the Oxford scholar Thomas Hyde.  Watch this space!