Anyone who has been in the vicinity of the Brunei Gallery SOAS during the last few weeks could hardly have failed to notice the frenzied activity in preparation for ‘The Everlasting Flame: Zoroastrianism in History and Imagination’ which opened last Friday (see also my earlier post on this subject). Put together by Sarah Stewart, Lecturer in Zoroastrianism in the Department of the Study of Religions, SOAS, together with Pheroza Godrej, Almut Hintze, Firoza Mistree and myself, it is a first in almost every sense. Not only has the theme, Zoroastrianism from the 2nd millenium until the present date, never been presented in this way before, but the majority of the over 200 exhibits have never been on public view. 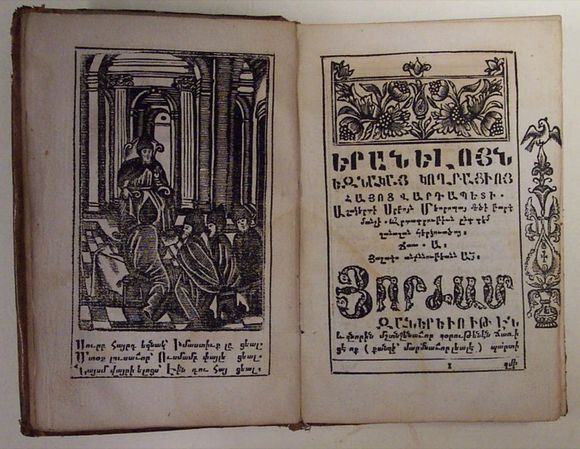 Bishop Eznik Kolbac‘i wrote this Refutation of the Sects around 440 AD. His criticism of Zoroastrianism was directed principally against the various forms of dualism. His work is valuable as a contemporary account of the religion at a time when the scriptures were still transmitted orally, a fact which Eznik mentions himself as a reason for the existence of so many conflicting views. The frontispiece of this first edition, published in Smyrna in 1762, shows Eznik instructing his pupils (British Library 17026.b.14)

I first met Sarah almost 30 years ago when we were students together in an elementary Pahlavi (a Middle-Iranian language) class at SOAS! Since then we have often discussed her dream of mounting an exhibition. The more familiar I became with the Zoroastrian material in the British Library, the more impressed I was with the incredibly wide range of materials we had. The Library's unique collection of Zoroastrian sacred texts, collected from the 17th century onwards, had been left untouched since the 19th century and I worked closely with our conservation department to restore them, hoping to get the opportunity to be able to exhibit them! The final choice of what to include was difficult, but I’m glad to say the British Library has made a significant contribution with over 30 major loans. 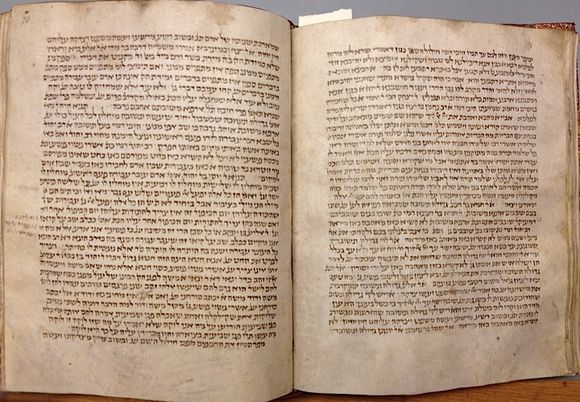 A 12th or 13th century copy of the Babylonian Talmud. The Talmudic period in Babylonia largely overlapped with the Sasanian empire (224-651 AD) and during this period the Babylonian rabbis shared numerous intellectual and cultural concerns with their neighbours, the Zoroastrian priests at Ctesiphon, capital of the Sasanian empire. These affected matters of civil and criminal law, private law, theology, and even ritual (British Library, Harley 5508, ff.69v-70r)

Several people have asked me what my ‘favourite’ exhibits are! The 7th century BC cuneiform tablet from Nineveh, thought to contain the name of the principal Zoroastrian deity, Ahura Mazda (‘Wise Lord’), and a 4th century Achaemenid document from northern Afghanistan attesting the earliest use of the Zoroastrian day names and offerings for the Farvardin (spirits of the dead) must be amongst the most significant items. Equally impressive are the stunning ossuaries from 7th century Sogdiana and the beautiful Parsi portraits and textiles dating from the 19th century, the result of flourishing trade with China. A gallery on the top floor also includes works by the modern artists Fereydoun Ave, Mehran Zirak and Bijan Saffari. I mentioned a few British Library favourites in a previous post (The Everlasting Flame: Zoroastrianism in History and Imagination). Here are a few more: 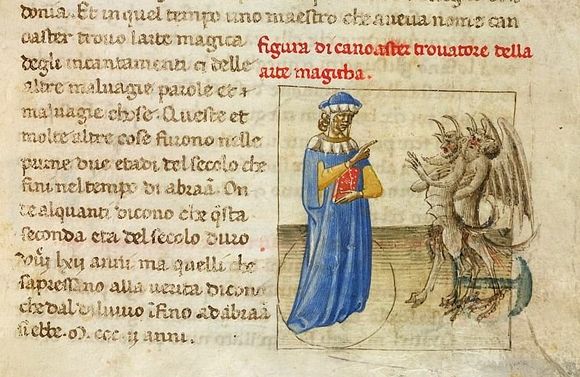 The concept of Zoroaster as a magician or philosopher from the East is widespread in European literature, particularly after the Renaissance with its increased awareness of Greek and Hellenistic literature. This Italian translation by Bono Giamboni of Li Livres dou Trésor by Brunetto Latini (1230–94) dates from 1425. Of Zoroaster he writes: ‘And at that time a master called Canoaster [i.e. Zoroaster] discovered the magic art of spells and other wicked words and wicked things. These and many other things happened during the first two ages of the era that finished in the time of Abraham.’ (British Library, Yates Thompson 28, f. 51r) 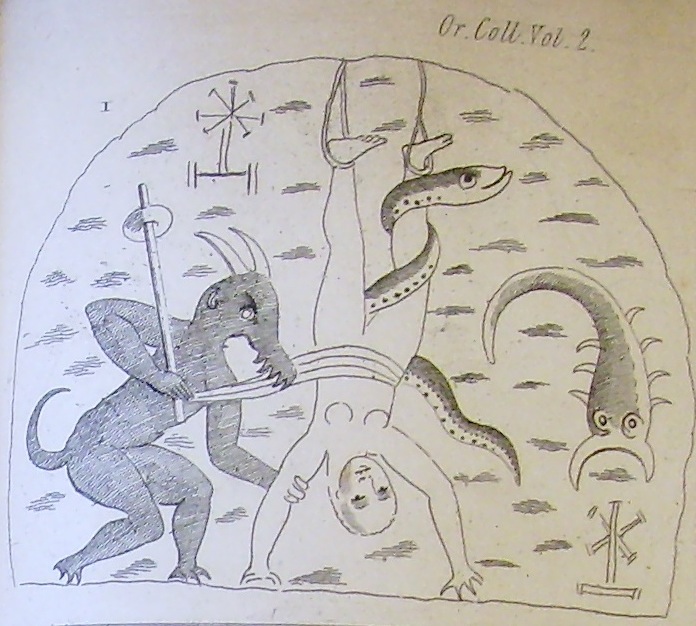 ‘The woman who didn’t obey her husband’. This engraving, dating from 1798, from the Persian Arda Viraf Nameh (the visionary journey of Viraf the Just to heaven and hell), is displayed in the exhibition alongside the original which is now part of the John Rylands Collection, Manchester (British Library, SV 400, vol. 2 part 3, facing p. 318)

The exhibition is free and open until 15 December, Tuesday- Saturday 10.30 - 17.00 (late night Thursday until 20.00, special Sunday opening on 15 December). For more details, follow these links to the exhibition website and facebook page.

The exhibition catalogue, edited by Sarah Stewart, includes 8 essays and photographs of every item in the exhibition. It is available from the publishers I.B. Tauris and from the SOAS bookshop (at a special discount price of £17).

Posted by Ursula Sims-Williams at 12:34 AM