At the end of October, CREAM (University of Westminister), South Asian Arts Group (SAAG) and the South Asian Literature Festival (SALF) organised a symposium on the under-researched area of South Asian floor-drawing and mural traditions and their contemporary manifestations. 'From Floor to Ceiling' symposium was held at the University of Westminister with an external trip to view original wall paintings at the British Library. 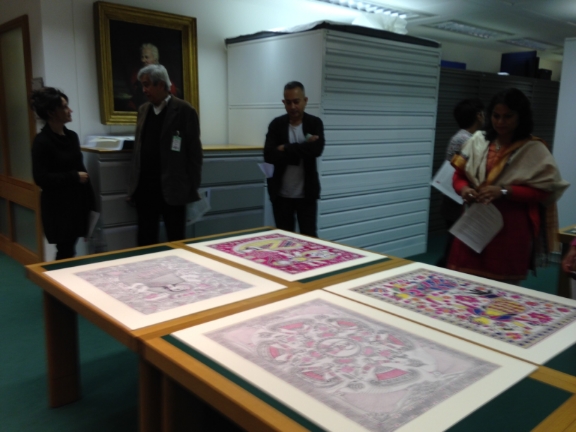 The Library is best placed to host a session on Maithil and Madhubhani paintings; the art historian who first documented this regional style of art was William G. Archer, the husband of Mildred Archer. Mildred was the Head of Prints and Drawings Section at the India Office Library from 1954-80.

William served in the Indian Civil Service and during their first year of marriage, in 1934, they were stationed in Bihar. Archer was the sub-divisional officer and responsible for documenting the damage caused by a major earthquake in the region. Visiting villages and private homes, Archer discovered murals on the walls of the homes. These drawings were produced by the women of the household to commemorate particular stages in life including the sacred thread ceremony for Brahim boys and marriage. The murals features symbols of fertility and marriage including fishes, turtles, parrots and lotus rings.  Other murals featured Hindu deities including the goddess Lakshmi and the incarnations of Vishnu.

Archer was invited into the homes and permitted to photograph the interiors. Aide-memoires produced using water-colours on multiple sheets of paper glued together were presented to Archer.  Gathering information during the next few years, Archer published his documentation and research on Maithil paintings in the arts magazine Marg in 1949. His research prompted Mrs. Pupul Jayakar of the All India Handicrafts Board to study the folk art traditions in the region in detail. In the late 1960s, when Bihar was struck by famine, Mrs. Jayakar suggested that the local women produce murals on paper that could be sold in New Delhi and provide a revenue stream. The All India Handicrafts Board presented a sets of the works from this project to the Library in 1975. 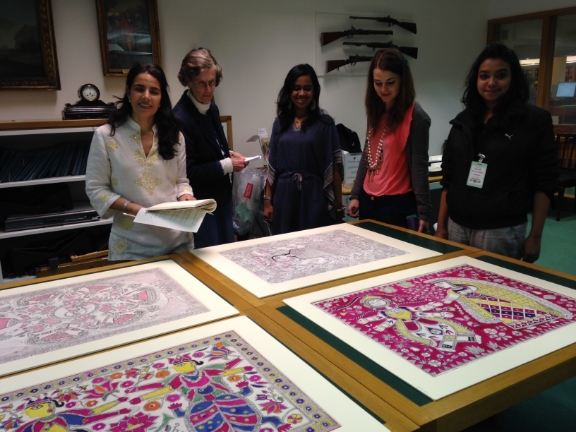 During our viewing session, there were two specific groups of paintings that we examined, with the aim to encourage collaboration and exchange on the under-researched area of mural paintings. The first group included late 19th century drawings by Maithil Kayasth and Maithil Brahim women from the village of Darabhanga, Bihar that were presented to W.G. Archer in 1940. The second group of drawings were commissioned by the All India Handicrafts Board and made by women in Bihar between 1973-75.  All of our folk paintings are listed on our India Office Select Material Catalogue. Visual materials held in our collection can be viewed by appointment in the Asian & African Studies Print Room. Please email apac-prints@bl.uk for an appointment.