The Search for Alexander Hadarli

Among the most spectacular of the paintings in the recent British Library exhibition Mughal India: Art, Culture and Empire were two of the latest known dated works of Ghulam ‘Ali Khan, showing the court of the last Nawab of Jhajjar, ‘Abd al-Rahman Khan, in 1849 and 1852. 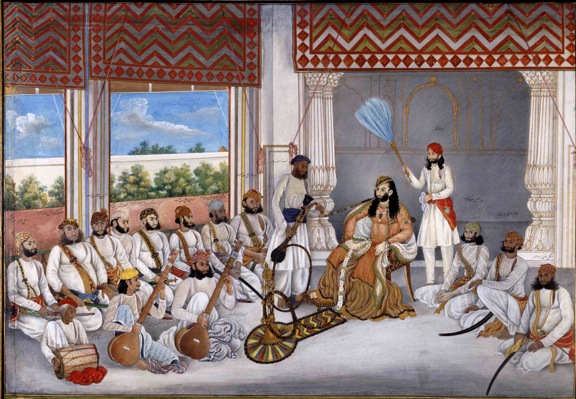 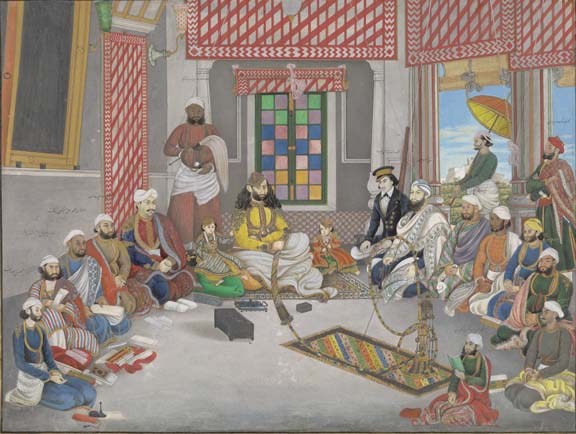 Nawab ‘Abd al-Rahman of Jhajjar in his court in cool weather with his two young sons and various courtiers and attendants.  By Ghulam ‘Ali Khan, dated January-February 1852. British Library, Add.Or.4681.

All the numerous inscriptions identifying the participants in these two durbars were given in the book accompanying the exhibition (see Losty and Roy 2012, pp. 231-32), as well as references to other known works of Ghulam ‘Ali Khan done for the Nawab of Jhajjar, but the identification of the young European officer seated to the left of the Nawab in the 1852 picture was left undecided. His name is given in Persian characters beside him: Alakzandar Hadarli sahib.  He is dressed in a blue coat and cap, and appears to be a political officer of the Bengal civil service dressed in undress military uniform.  Diligent searches, however, of the relevant India Office files and published biographical sources failed to find any mention of any Haderly or Hiderly in any capacity in the military or civil service in the Bengal Presidency.  However, purely by chance, while researching someone else in Beale’s Oriental Biographical Dictionary, my eye fell on the following entry:

‘AZAD, the poetical name of Captain Alexander Hiderley, in the service of the Raja of Alwar.  He was a good poet and left a small Diwan in Urdu.  His father’s name is James Hiderley and his brother’s Thomas.  He died on the 7th of July, , 1861, Zilhajj AH 1277, at Alwar aged 32 years.’

Here was the answer to the problem that had vexed me since the British Library acquired these two paintings in 1994.  Hiderley seated immediately to the Nawab’s left turns out to be good-looking young man of about 22 if Beale is to be relied upon.  Clearly he had no difficulty in sitting in the Indian manner, suggesting that he might not after all be a regular East India Company man.  But if he was in Alwar service as Beale indicates, what was he doing in Jhajjar? Despite his date of death being known, there was no mention of it in the relevant volumes of the Bengal almanacs and directories.

Beale also describes young Alexander as a Captain, which accords with his uniform in this picture.  His absence from the official East India Company records suggested that he was ‘country-born’ with an Indian mother and that he found employment with the nobility round Delhi such as the Maharao Raja of Alwar and the Nawab of Jhajjar.  His literary productions also awaited discovery.  There is for instance no mention of him in Garcin de Tassy’s Histoire or Sprenger’s catalogue of the libraries of Oudh.

Perhaps Beale was transcribing his name from Urdu records and hence was not certain of its exact spelling?  Following this train of thought, a clue was provided in a search of the BACSA records for the Alwar cemetery in the hope that he might have been buried there in 1861 (MSS Eur F370/1329), but this search yielded no Alexander Haderli but instead an Eva Heatherly.  She was buried there in 1892, the wife of a George Heatherly, who was Superintendent of Jails at Alwar and died in 1901 in Delhi aged 60.  Was Hiderly the same as Heatherly, only badly transliterated?  Online genealogical records confirmed this supposition and revealed that George was the son of a Thomas Heatherly, who was the elder brother of Alexander Heatherly Azad (1829-61), our poet and captain.  Thomas too was something of a writer, since a manuscript of his diary in Urdu for 1842-53 is in the Central Reference Library of Delhi University, where he describes himself as in the service of Nawab Qaisar ‘Ali Khan Sahib.  Their father was James Heatherly (1787-1859), as Beale indicates, who turned out to be one of the East India Company’s subordinate officials.  He is described in the East India Registers as a writer or clerk in the customs or commissioner’s office in first Meerut and then Delhi.  He was an uncovenanted civil servant, which suggests that he went to India unofficially as many did to make some kind of career for themselves there.  There were in fact ten children in all, so the elder Heatherly seems to have made himself very comfortable in Meerut with an unnamed Indian woman.

Alexander Heatherly Azad was in fact well known in Delhi poetical circles under his pen-name Azad as a pupil of ‘Arif and he took part in the musha’iras arranged by Bahadur Shah Zafar and the princes.  He is mentioned in Farhatullah Beg’s Dehli ki akhri shama, translated by Akhtar Qamber as The Last Musha’irah of Delhi, as sitting among the 40 poets gathered in the courtyard of a great house for a night of poetry presided over by Mirza Fakhr al-Din, Bahadur Shah Zafar’s favourite son and, under the name Ramz, a fine poet in his own right.  Azad was ‘one of the great poets of the Urdu language’ (Saksena 1941, pp. 73-4).

I quote from The Last Musha’irah (pp. 88-9): “The shama’ [lamp] now came to Azad.  Azad’s own name is Alexander Heatherly.  He is French by nationality [this is obviously wrong] but was born in Delhi.  It was in Delhi that he received his education and was commissioned as captain of the Arsenal in the Armed Forces station at Alwar.  He is about twenty-one years old and has some knowledge of medicine.  He is a great lover of poetry and is a shagird [disciple] of ‘Arif’s.  The moment he gets wind of a musha’irah he promptly arrives in Delhi.  He wears a military uniform and speaks such pure idiomatic Urdu that you would take him for an authentic Dehlivala.  His couplets are not bad either.  Please judge for yourself:

So hot and passionate a sinner am I on the course of life
That not a trace of moisture is left in my garment of sin.
Had you strength in your feet you could wander aimless in the wilderness;
And your hands would know the madness of tearing your pocket.
Azad, is there any limit to his absent-mindedness and oblivion?
On the day of Chehlam [the 40th day of mourning] he turns up to ask after the health of the deceased!”

Qamber adds that Heatherly’s father was in fact English and his mother an Indian Muslim, and that he used either Azad or Alec as his nom de plume.

As for Azad’s master, Maharao Raja Binay Singh of Alwar (reg. 1815-57) was a great patron of art, literature and architecture and transformed the town of Alwar as well as the royal collections.  He built the main palace in Alwar and a small and beautiful one called Moti Dungri or Banni Bilas a short distance outside.  His greatest work was the construction of a dam at Siliserh ten miles from Alwar which formed a lake from which water was brought to the town and its environs (Powlett 1878, pp. 23-23).  He enticed to his court painters, calligraphers, illuminators and bookbinders, including such artists as Ghulam ‘Ali Khan from Delhi and the Jaipur artist Baldev (see Hendley’s Ulwar and its Art Treasures, passim).  A rather fine portrait of Maharao Raja Binay Singh by Baldev is also in the British Library. 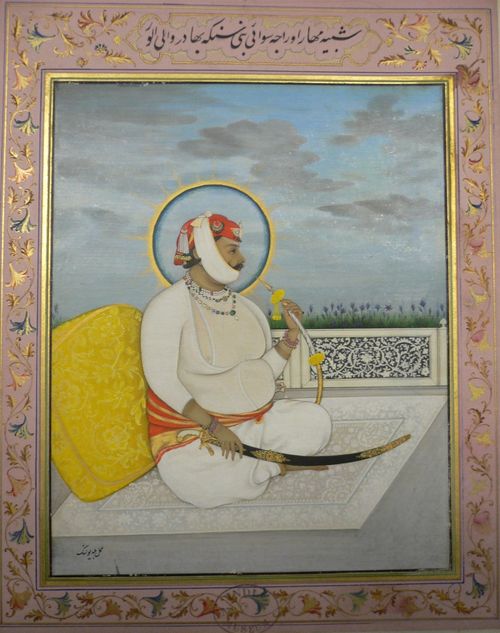 He was apparently stricken with paralysis during the last five years of his life when the governance of the state passed into the hands of his Muslim ministers which caused much trouble during his son Sheodan Singh’s reign.  In 1857 he sent the flower of his army to assist the beleaguered garrison in Agra.  They were set upon at Achnera by revolutionary sepoys from Nimach and Nasirabad.  The Alwar Muslims including the artillery sided with the rebels but the Rajputs fought and many perished.  It is not recorded whether Captain Heatherly was with the artillery on that occasion, but he certainly seems to have survived until 1861.

Although it would seem that Heatherly wore his military uniform even at poetic gatherings, his official uniform of the Maharao Raja of Alwar’s service in the 1852 painting by Ghulam ‘Ali Khan suggests that he had come to Jhajjar not as a poet but as an envoy from the Alwar Raja.  He is seated on the Nawab’s left opposite to the Nawab’s chief minister Pandit Kedarnath Sahib, alongside whom are ranged the chief judge and court officials.  The documents which they are holding or which are on the ground before them are official documents and not books of poetry, so presumably the scene represents the amicable resolution of some border dispute.  The town of Jhajjar is some 50 miles west of New Delhi, but the state itself, before its abolition in 1857, on its southern boundary bordered the state of Alwar.

In 1857 Nawab ‘Abd al-Rahman Khan made the mistake of hedging his bets, and paid for it with his life, being put on trial in Delhi and hanged on 23rd December 1857.  His end is described in William Dalrymple’s The Last Mughal (p. 417).  His estates were confiscated: most became part of the British district of Rohtak, although some areas were awarded to the loyal Sikh chiefs of Patiala, Nabha and Jind.  His moveable possessions were placed in the hands of the prize agents although Government did award pensions to his dependents.

As for Alexander Heatherly Azad, caught between the two worlds and seeing the one that he had most identified with being brutally destroyed, he presumably retired to Alwar where he and his relatives continued in the service of the Maharao Raja.  Manuscripts of his poems might yet be found in the collections of the museum in Alwar and elsewhere in Rajasthan.

Alexander Heatherly was married to Elizabeth Smith Daughter of James Smith on 13 October 1846 in Meerut.

Thanks Michael for the additional information!