‘The Speech of the Birds’: an illustrated Persian manuscript

Among the treasures recently digitised thanks to the generous support of the Iran Heritage Foundation is an illustrated copy (BL Add. 7735) of one of the most famous works in all classical Persian literature: Farīd al-Dīn ‘Aṭṭār’s Manṭiq al-ṭayr (‘Speech of the Birds’), a Sufi allegory of the quest for God.

In Manṭiq al-ṭayr, ‘Aṭṭār describes how the hoopoe, leader of the birds, tries to persuade them to set out on a quest to find the Sīmurgh, the supreme and immortal Bird who here symbolises the Creator. Most of the birds produce reasons why they cannot – or will not – undertake the perilous journey. Finally the hoopoe sets out with a few companions. Traversing seven valleys, which represent stages of the mystical Path, the thirty birds (sī murgh) finally encounter the object of their search, the Sīmurgh. Losing their illusory separative identities in the beatific vision, they find everlasting fulfilment.

Such is the narrative framework; but as in his other didactic works in masnavī form (rhyming couplets), ‘Aṭṭār intersperses many moral and instructive tales touching on the main themes of the poem. These include spiritual and earthly love and passion; faith and disbelief; death and the transitory nature of life in this world; and the ways in which ‘worlds collide’ in encounters between people who because of their respective positions in life are divided by a gulf that at times appears – and is surely intended by the author to be – partially analogous to that between the Creator and His creation. For that is one of the predominant leitmotifs in the illustrations to our manuscript. A future posting will look at the subjects of the paintings and their relationship to ‘Aṭṭār’s didactic messages. 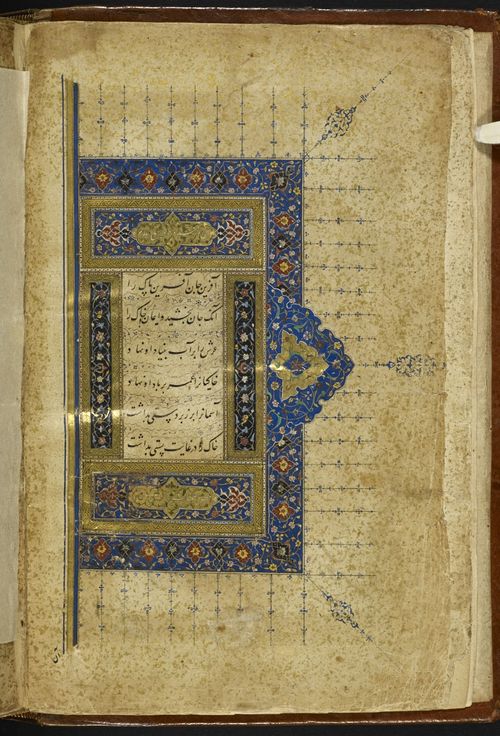 What is now Add. 7735 was acquired by the British Museum in 1825 by Act of Parliament from the estate of Claudius James Rich (1787-1821), British Resident at Baghdad and a discriminating collector of some 806 Islamic manuscripts, all now in the British Library. The previous history of this manuscript is almost completely unknown; firstly because it is now incomplete and has no colophon, and secondly because any other evidence has been lost through the removal of any folios at the beginning or end of the volume which did not contain text. Folio 1r has several ownership inscriptions; all, however, date from the 12th/18th century.

An interesting feature of this manuscript which has hitherto escaped attention is the omission of a number of the stories that occur near the end of the poem. As Dick Davis, whose translation omits the epilogue, has remarked, it is anticlimactic. Indeed, its omission from Add. 7735 would have been more understandable for the sake of literary effect. But comparison with pp. 253-8 of the critical edition by Sayyid Ṣādiq Gawharīn, to whose memory this posting is dedicated, shows that the manuscript, which has matching catchwords and no missing text folios, lacks six consecutive stories altogether, then resumes with the last three tales about the Seljuk vizier Niẓām al-Mulk (ed. Gawharīn, p. 258), the Prophet Solomon, and the famous Khurāsānian Sufi Abū Sa‘īd of Mihana. The epilogue text ends as in Gawharīn (p. 259), leaving about 40% of the text area free for the colophon that was never added. 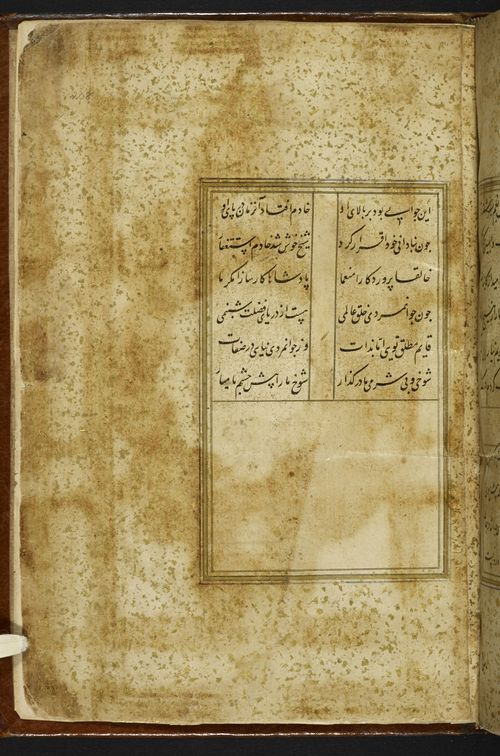 Further textual omissions appear to have been avoided by the calligrapher who copied the manuscript writing in a smaller hand to compensate for want of space. A total of 18 extra bayts (couplets) were fitted into the lengthy story of a king who killed his vizier’s son out of jealousy (cf. ed. Gawharīn p. 238-43): 3 bayts on 195v, 3 + 3 on 196r, 3 on 197r, 3 on 197v, and 3 on 198r. Further scrutiny may perhaps bring further actual omissions from Add. 7735 to light. 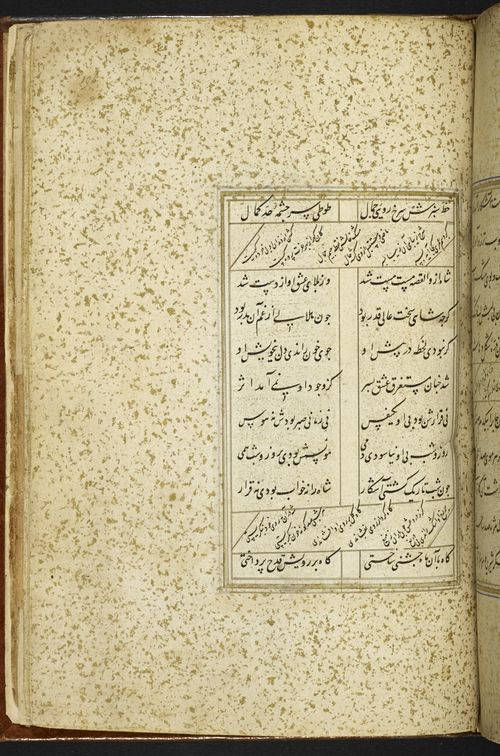 The lack of documentary evidence for the date and region of origin of the manuscript is compensated for, to a limited extent, by the presence of miniature paintings in a style that displays a number of specific influences, and with which the fine nasta‘līq calligraphy and opening illuminated headpiece are consistent. Published descriptions of the paintings describe them as being in what is called the Later Herat style, associated with the patronage of Sultan Ḥusayn Bāyqarā who ruled from that city between 1469 and 1506, and with Kamāl al-Dīn Bihzād (d. 1536), the most famous of all Persian painters. Despite their similarities, however, the miniatures in Add. 7735 differ noticeably from those found, for example, in the British Library manuscripts Add. 25900 and Or. 6810, both copies of Niẓāmī’s Khamsa (‘Five Poems’), and in the superb copy of Sa‘dī’s poem Būstān (Dār al-Kutub al-Miṣriyya, Cairo), all produced under Bihzād’s supervision and with his participation. Likewise, they differ from the four contemporary illustrations in the equally magnificent, and Bihzādian, manuscript of ‘Aṭṭār’s Manṭiq al-ṭayr (Fletcher Fund, 63.210) preserved at the Metropolitan Museum of Art, New York.

The miniatures in Add. 7735 do possess some of the charm, compositional flair and atmosphere of the late 15th century masterpieces just referred to; but they are less conceptually ambitious, more restricted in palette, architectural detail and landscape, and lack the magisterial touch of Bihzād. It is known, however, that Bihzād, his star student Shaykhzāda, and a number of other Herat painters were ‘offered’ positions at the court of the Uzbek Shaybānids, based at Bukhara, who conquered the region in 1506. Others joined later, finding themselves no longer comfortable as Sunnīs in Iran under the militantly Shī‘ī Safavid dynasty. These developments ensured the partial continuation of the Later Herat tradition. Given their similarity, in certain respects, to some of the more Herat-influenced Bukhara painting of the first two or three decades of the 16th century, one is tempted to assign the Manṭiq al-ṭayr tentatively to that era.

So far as can be ascertained, our Manṭiq al-ṭayr manuscript has been ‘formally’ exhibited (apart from occasional appearances in the general display of manuscripts in the British Library, and before that in the British Museum) only twice, in 1967 and 1977; and most of the nine miniatures have never been published. Moreover, there are several inaccuracies in the descriptions of their subjects given in Miniatures from Persian Manuscripts, the late Norah Titley’s pioneering and invaluable catalogue and subject index of miniatures in the British Library and British Museum. It therefore seems a worthwhile project to reproduce and discuss them, with reference to ‘Aṭṭār’s text, in a future posting for this blog.

This manuscript is now available in our digitised manuscripts viewer. Follow us on twitter (@BLAsia_Africa) to keep in touch with further developments.

Posted by Annabel Gallop at 8:00 AM