One of the most exciting aspects of working with the British Library’s Persian collections is ocasionally stumbling upon some temporarily forgotten treasure. By chance I noticed this entirely unknown illustrated copy of Firdawsi’s Shahnamah a few weeks ago while reviewing draft descriptions by C.A. Storey (Assistant Librarian (1919) and then Librarian (1927) of the India Office before becoming Sir Thomas Adams Professor of Arabic at Cambridge) which he compiled as part of a project to catalogue the uncatalogued manuscripts in the India Office Library. This work was originally begun in the 1930s, but with the intervention of the 2nd World War, the project was never completed. Now thanks to sponsorship by the Barakat Trust (more on this later) Storey’s unrevised description is available on our Digitised Manuscripts site (Mss Eur E207/15, ff.3-6).

The Simurgh returns Zal to his father Sam 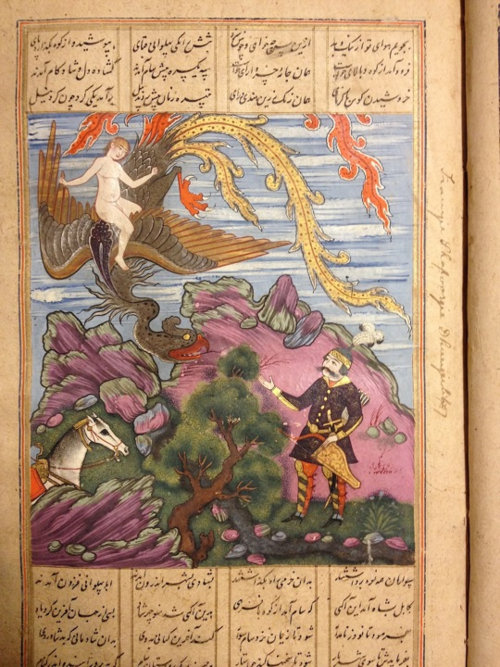 The albino Zal, son of the hero Sam, abandoned at birth in the mountains, was rescued and brought up by the magical Simurgh bird. Subsequently regretting his actions, Sam set off to find his son. Mindful of Zal’s future destiny, the Simurgh reluctantly returned him to his father, leaving him with magical feathers by which he could summon the Simurgh’s help at a time of need. The margin of this unsigned miniature dating from ca. 1640 contains the signature of a previous owner Framjee Shapoorjee Dhunjeibhoy dated 1874.
IO Islamic 3682, f.38r

According to Storey’s description, a one-time inserted memorandum (now unfortunately missing), signed by Sir George Birdwood explains that the manuscript was taken in by the Bombay Fort Post Office in a parcel addressed to him, but without any postage being paid, nor any clue as to the sender. Sir George Birdwood, who retired in 1868 from a successful career as an administrator in India, was at the time working as a special assistant in the revenue and statistical department of the India Office to whom he presented the copy on 30 April 1904. The anonymous donor may have been a Parsi whose signature ‘Framjee Shapoorjee Dhunjeibhoy’ is dated 1874 (f.443v) and [18]87 (f.38r). Unfortunately nothing more is known about him! 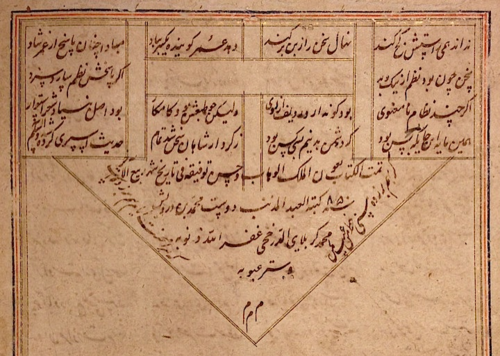 The manuscript itself is as puzzling as its history! Though the first part of the scribe’s name is quite clear the word following Karbala’i remains a mystery. The year in the colophon at first glance appears to be 850 (1446) which is impossibly early, however traces of a zero before the five are clearly visible. Black and white images acquired with the help of RetroReveal (this amazing program, worth a blog of its own, helps to reveal lost content and is available freely at retroreveal.org) support this interpretation. The images also show that the second stroke of the number eight is possibly written in a different ink, suggesting that the original date might have been 1050 (1640).

The manuscript contains 48 images, six1 of which (ff.63v, 69v, 92r, 301v, 305v and 368r) are signed by Muhammad Yusuf, a prolific artist during the reigns of the Safavid rulers Shah Safi (r. 1629-42) and Shah ʻAbbas II (r. 1642-66). Muhammad Yusuf also contributed to the famous Windsor Castle Shahnamah, Holmes 51, together with the artists Malik Husayn Isfahani and Muhammad Qasim (see Robinson below). A list of Muhammad Yusuf's known signed paintings is given under lot 69 of Sotheby's sale 'Arts of the Islamic World', London, 24 Apr 2013. A complete list of the 48 miniatures in our manuscript can be downloaded from the following link IO3682_ills. 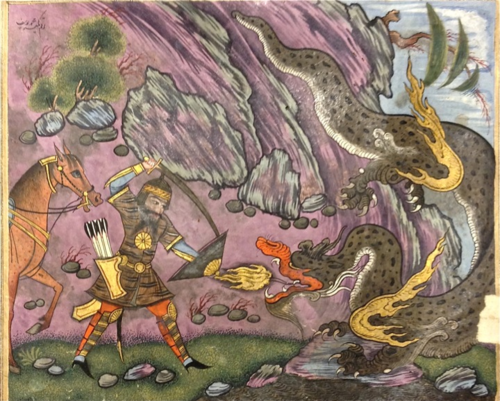 Rustam son of the hero Zal, engaged in a quest to liberate king Kavus from the demons of Mazandaran, undertook seven trials. In the third, Rustam, asleep, was approached by a monstrous dragon. Twice woken by his horse Rakhsh, in the darkness of the night he failed to see any danger and went back to sleep. Woken a third time, however, Rustam finally saw the dragon and with Rakhsh’s help succeeded in killing him. The painting is signed by Muhammad Yusuf.
IO Islamic 3682, f.69v

The battle of Suhrab and Rustam Unknown to Rustam, princess Tahminah of Samangan gave birth to his son Sohrab. Years later Suhrab and Rostam met on opposite sides in the battlefield, both unaware of their relationship. Rustam mortally wounded Suhrab with a dagger only to recognise, too late, the clasp that he had given Tahminah after their night of passion. Signed by Muhammad Yusuf.
IO Islamic 3682, f.92r

Rustam rescues Bizhan from the pit 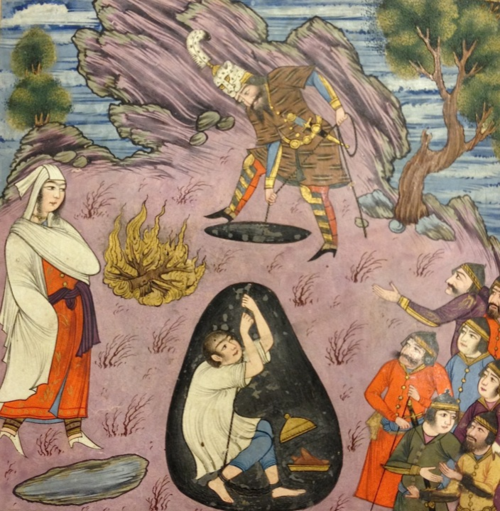 The hero Bizhan, on a hunting trip, ended up joining in an outdoor feast with Manizhah, daughter of Afrasiyab, the arch enemy of Iran. When the festivities finished, Manizhah drugged Bizhan, took him home with her and hid him in the women's quarters. On discovery, he was spared death, but was instead imprisoned in a pit with only the disgraced Manizhah to minister to him. She enlisted Rustam’s help to move the giant rock and free Bizhan with his lassoo.
IO Islamic 3682, f.194r

The death of Rustam 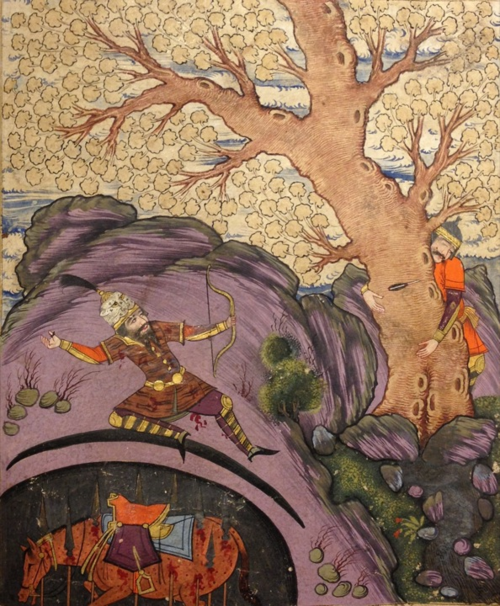 In old age Rustam’s half brother Shaghad plotted his death. He had pits dug and filled them with spears and sharp swords before covering them over. Spurred on by Rustam, Rakhsh and his rider fell into the trap. Rustam’s dying wish to the treacherous Shaghad was to be handed his bow with two arrows. Granted, he strung it one final time, killing Shaghad who had taken refuge behind a tree.
IO Islamic 3682, f.310v 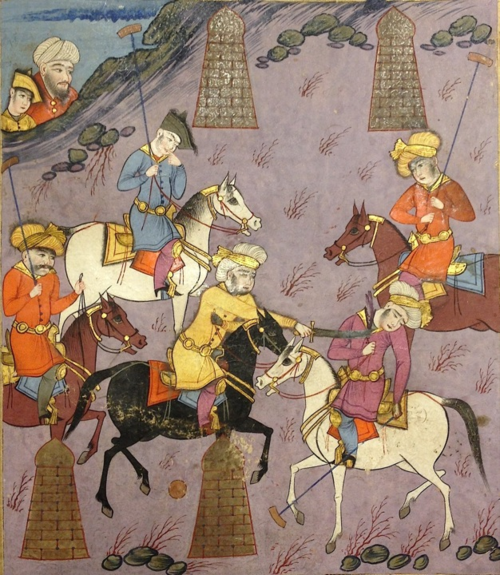 Bahram, son of Siyavash, plotted to kill Bahram Chubinah while playing polo. However, his wicked wife, herself in love with Bahram Chubinah, betrayed her husband, warning Bahram Chubinah that he would be wearing mail under his clothes. Alerted, Bahram Chubinah tapped all the players as he approached them and when he discovered Bahram, he cut him in half with his scimitar.
IO Islamic 3682, f.483

The romance of Khusraw Parviz and Shirin 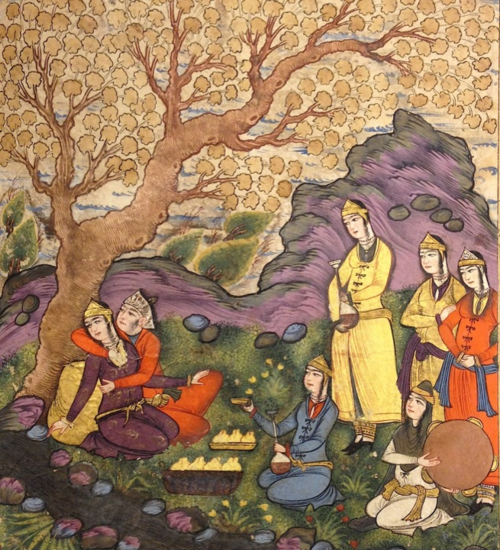 Khuraw Parviz had loved Shirin in his youth but gave her up when he became king. Meeting years later, he fell in love with her again and took her home and married her.
IO Islamic 3682, f.510v

As yet this copy of the Shahnamah is completely unrecorded. Hopefully art historians will now be able to get to work on it and assign it to its rightful place in the history of Persian miniature painting.

For comparison with other illustrations, readers should consult the database of the Cambridge Shahnama Project.

[1] Postscript: with thanks to Eleanor Sims for recently pointing out the sixth identification (f. 368r) which I had originally overlooked!

Posted by Ursula Sims-Williams at 1:48 PM

Fantastic! Any chance the previous owner could have been the Bombay antiquary and translator Dhunjeebhoy [Dhanjibhai, Dhunjibhoy] Framji [Framjee] or one of his relatives. He had an extensive library and at least one other IO ms. is from his coll. see Ross and Browne (catalogue of two collections...), p.172. Penn has a copy of the 2007 Windsor Shahnama book if you're interested in particular pages (I think the BM might have a copy as well).

Reply by editor:
Thanks for this! A colleague in Bombay is also looking out for Framjee Shapoorjee Dhunjeibhoy. What documentation do you have for yours? West's note (thanks for ref!) is a bit vague and if there ever was any indication of the provenance of the Pahlavi Rivayat which he is writing about, it is not preserved today!
As for the Windsor Shahnama, I'll ask if BM have a copy, otherwise I might get back to you!
Ursula (ursula.sims-williams@bl.uk)