Among the treasures recently digitised thanks to the generous support of the Iran Heritage Foundation is a fine illustrated copy (BL Add.7735) of one of the most famous works in all classical Persian literature: Farīd al-Dīn ‘Aṭṭār’s Manṭiq al-ṭayr (‘Speech of the Birds’), a Sufi allegory of the quest for God. A recent posting introduced the poem and discussed some textual and artistic features of the manuscript. This posting examines the first three illustrations (see Titley, p. 35) and the accompanying text, in relation to ‘Aṭṭār’s poem and some of its principal themes. The intention is to discuss the remaining six paintings in two future postings. 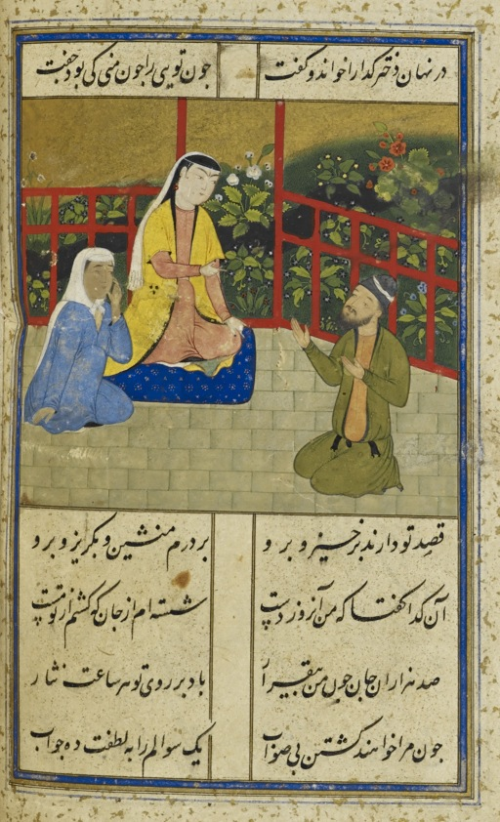 On folio 28v (cf. ed. Gawharīn, pp. 43-45), a beggar kneels before the princess he loves, who is accompanied by a dark-skinned woman. The latter (not mentioned in the poem) is either a maid or perhaps an adviser; the reason for suggesting the latter possibility is that her body language suggests that she is listening intently to the conversation – something servants are rarely portrayed as doing in Persian miniatures.

One day, long before, the princess had smiled at the poor man. That fatal smile had aroused false, but irrepressible, hopes in him. For years the beggar lives with the street dogs at the gates of her palace, hoping to win her love. Finally the princess sends for him and tells him that he must leave since it has been decided that otherwise he will be put to death. In reply, the beggar exclaims that he is happy to die for love of her, but asks the princess why she had smiled at him. She explains that she had simply been amused by his foolishness and naivety. The text on the page illustrated tells us that

The girl summoned the beggar secretly, and told him:
‘How could one like you be paired with one like me?
They’re out to get you. Run away! Be off!
Don’t sit on my doorstep. Get up and be off!’
Said the beggar, ‘I washed my hands of life
the day I fell madly in love with you.
May a myriad lives, like that of my restless soul,
be scattered each moment before your face!
Since they’re going to kill me, though wrongfully,
be kind and answer one question from me…’ 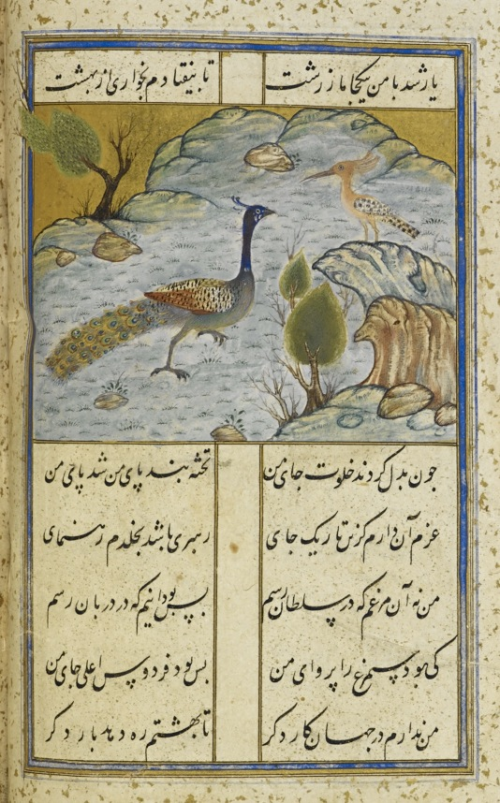 Folio 30v (cf. ed. Gawharīn, p. 46) depicts the hoopoe, leader of the birds, and the peacock. Most of the birds produce reasons why they cannot – or will not – set out on the perilous quest for the wondrous Sīmurgh bird. The vain and splendid peacock, having been banished from the joys of Paradise because of his pride, explains that he is unable to join the group because he is too much obsessed by the desire to return to his former celestial abode. In ‘Aṭṭār’s words:

Said [the peacock], ‘Though I am Gabriel among birds,
something far from good came upon me through fate.
[The above couplet is at the bottom of the preceding page.]
Somewhere a foul serpent became my companion,
so I fell in humiliation from Paradise.
When the place of my solitary worship was changed,
my legs were tied up to the place where I stood.
Yet I am resolved, with the help of a guide,
to find my way to Heaven from this dark place.
I’m not the kind of man to reach the King;
to be moving about would be enough for me.
Why should the Sīmurgh care about me at all?
the Highest Paradise is enough for me.
I have no other things to do in this world,
if only I can get to Heaven once more.’

The rejoinder (on the next page) comes from the Hoopoe. It is not enough, he argues, for God’s creatures to aspire to the delights of Paradise. They were created to know and worship when the Creator of all, Who is like a boundless ocean possessing beauties and perfections beyond all reckoning and imagining – compared to which Paradise itself is a mere droplet. 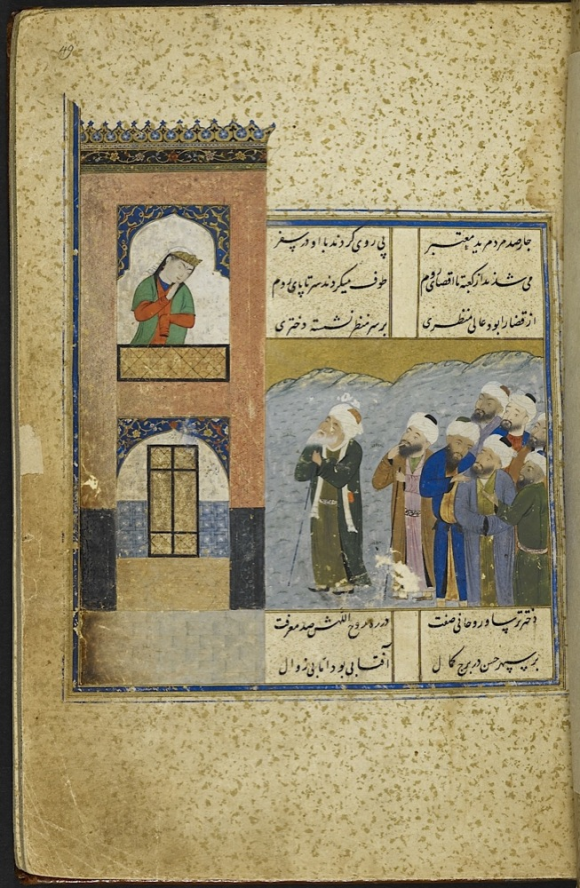 On folio 49r (ed. Gawharīn, p. 68), the venerable Shaykh Ṣan‘ān (or Sam‘ān) falls helplessly in love as he gazes at a Christian maiden on her balcony. In this famous tale the Shaykh abandons his Muslim faith, drinks wine, and becomes the girl’s swineherd; his disciples leave in despair. Eventually, however, the maiden sees a vision and embraces Islam, while the Shaykh too regains his former faith. The verses on this page recount the beginning of the tale.

So four hundred disciples, men of worth,
set out on the journey together with him.
From the Ka‘ba they went to furthest Asia Minor,
marching round Anatolia from head to foot.
By chance there was a high balcony
upon which a Christian maiden was sitting –
a Christian girl like a heavenly angel,
with hundredfold knowledge of Christ’s way,
her beauty’s sun in Perfection’s sign [of the zodiac].
A sun she was – but one that never set!

Before telling this extraordinary story ‘Aṭṭār explains its significance. The seeker after God, in transcending the boundaries of his limited vision, must leave behind all his preconceptions, all that that he thinks he knows. In figurative poetic language this is termed ‘infidelity’ (kufr), or the renunciation of one’s former faith, although this does not signify literally abandoning all conventional religious beliefs and practices. The Hoopoe tells the birds:

Love will open the door of poverty to you;
Poverty will guide you to Infidelity.
When you’ve neither this faith or this unbelief,
this soul and this body of yours are no more.
After that you’ll be man enough for this task –
and it takes a man to unveil such secrets!
Set out like a man and have no fear;
Pass beyond unbelief and belief. Have no fear.
How much more of this dread? Leave childhood be!
Be falcons, be lions of men, for this quest.
Should a hundred trials come up suddenly,
still there’s naught to fear once you’re on this Path!

This manuscript is now available to read in entirety on the British Library's digitised manuscripts page. Follow us on Twitter to keep in touch with further developments at @BLAsia_Africa.