The Javanese story of the Prophet Joseph

The British Library has recently acquired two Javanese palm leaf manuscripts of the Carita Yusup, the story of the Prophet Joseph (Or. 16913 & Or. 16914).  According to Ben Arps (1990: 36), to judge from the hundreds of manuscripts of this text that have survived, originating not only from Java but also from the neighbouring islands of Madura and Lombok, the Carita Yusup was once probably the single most popular traditional Javanese poem.  Arps has described attending an all-night recitation of one such manuscript in Banyuwangi in East Java in 1989, when a group of 15 men took turns to sing the story of the life of Joseph, from the age of twelve when he dreamt of the sun, moon and eleven stars bowing down for him, until he became ruler of Egypt after interpreting the Pharaoh’s dream. 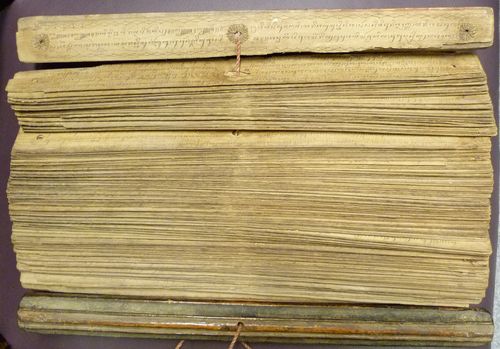 The manuscripts were generously donated to the British Library by John Johnson, in memory of his father Alfred Johnson.  Last month I had the pleasure of meeting John, and hearing about his family background in Java, when he brought the manuscripts down to London from his home near Stockport.  In 1941 Alfred Johnson was sent out from the UK to Java by the Calico Printers Association to manage the Nebritex factory in Pleret, Pasuruan, near Surabaya.  During the Japanese occupation both Alfred and his wife Ada were interned: Ada in Java, while Alfred was first sent to Changi Jail in Singapore and then on to work on the ‘death railway’ near Pekanbaru in Sumatra.  After the war Alfred Johnson returned to Java, and John was born at St. Carolus hospital in Jakarta (then Batavia), in 1947.  The family returned to England in 1953, but Alfred sadly died in Manchester soon after, in  July 1954.

As recalled in the affectionate obituary of Alfred Johnson in the staff magazine CPA Star written by Mr Khoe Tiong Djian, who had served as Private Secretary to Alfred throughout his time at Nebritex, Alfred had played a symbolic role in the early economic history of the Republic of Indonesia:  ‘Mr Johnson was the first civilian Englishman to enter the Republican territory as guest of the Republican Government.  He went with a view to negotiating with the Government for the return of our factory and on March 19th, 1947, Reuter Cable Service flashed the news around the world to the effect that [Nebritex] was the first European-owned concern to be transferred back to its owners.  The official handing over, however, took place on June 13th, 1947, between Mr Johnson, representing the Calico Printers’ Association, Ltd., Manchester, and Dr A.K. Gani, representing the Republic of Indonesia as Minister of Foreign Affairs.’ 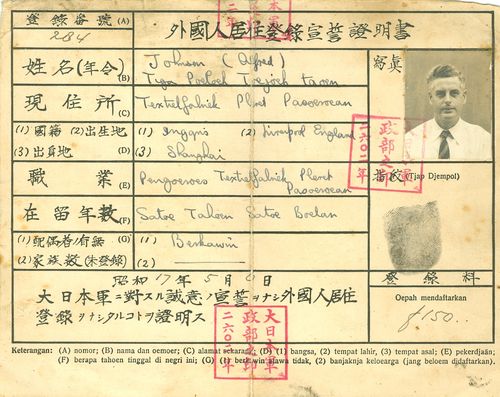 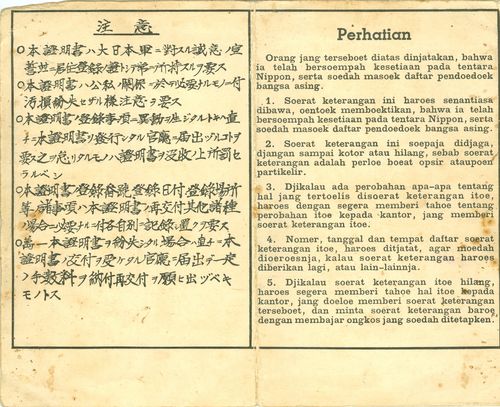 Identification papers issued to Alfred Johnson at the start of the Japanese occupation of Java, shortly before he was interned, dated 2062 (1942).  Reproduced courtesy of John Johnson. 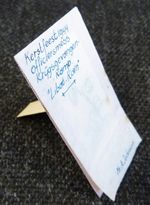 One of John Johnson’s most treasured possesions: a tiny (7 x 3.7 cm) Christmas card made for his father in 1944 by Dutch officers in the Lipat Kain prison camp in Riau, Sumatra. Reproduced courtesy of John Johnson.

John Johnson did not have any information as to how his family had come into the two Javanese manuscripts.  They are both quite large, and both have covers of wooden boards originally stained red.  Or.16913 has 140 folios, with a fine decorated initial leaf, while Or.16914, with 141 folios, has many old repairs to the leaves, using tiny splints sewn across the cracks.  They join four other Javanese palm leaf manuscripts of the Carita Yusup in the British Library (Or. 14606-14609), given by Michael Goodwin from Leeds in 1990, and together constitute a good corpus for further investigation of the material form of this ever-popular tale.

Part of the first leaf of Or.16913, showing the opening lines in Javanese language and script, with unusual incised decorative diamond-shaped frames.  The first leaf is a double leaf, with intricate ‘button-hole’ stitching through the holes.  British Library, Or.16913, f.1r (detail). 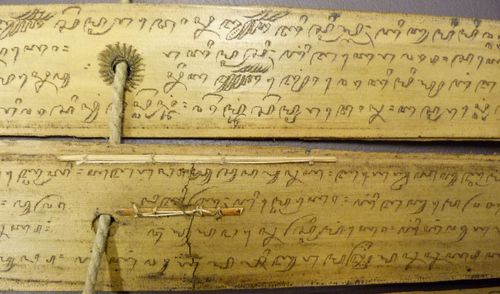 Detail of the first two leaves of the second manuscript of Carita Yusup, showing old repairs to the second folio using tiny wooden splints to patch up a crack in the leaf.  British Library, Or.16914, ff.1-2 (detail).

Bernard Arps, ‘Singing the life of Joseph: an all-night reading of the lontar Yusup in Banyuwangi, East Java’, Indonesia Circle, 1990, 19 (53): 35-58.
Bernard Arps, Tembang in two traditions: performance and interpretation of Javanese literature. London: School of Oriental and African Studies, 1992.
George Duffy, ‘Life and Death on the Death Railway through the jungle of Sumatra’, published online on 4.7.2000.

Posted by Annabel Gallop at 3:12 PM