Zoroastrian visions of heaven and hell

Three of the most fascinating exhibits in ‘The Everlasting Flame: Zoroastrianism in History and Imagination’, on view at the Brunei Gallery SOAS until December 15th, concern the Zoroastrian vision of heaven and hell.

The revelations of Arda Viraz (‘righteous Viraz’), or Viraf, as his name has been transcribed in Persian, were written in Pahlavi (pre-Islamic Persian) during the early Islamic period, and reflect a time of religious instability. The story is set in the reign of the founder of the Sasanian Empire, Ardashir I (r. 224-241). It describes how the Zoroastrian community selected the righteous Viraz to visit the world of the dead returning with an account of the rewards and punishments in store. Although the story did not assume its definitive form until the 9th to 10 centuries AD, it can be regarded as part of a tradition of visionary accounts, the earliest of which is found in present-day Iran in the third-century inscriptions of the Zoroastrian high priest Kirder.

Many copies of this popular story survive in both prose and verse, with versions in Persian, Gujarati, Sanskrit and even Arabic (Kargar, p.29). Several include vivid illustrations, re-enforcing the story’s underlying importance as a Zoroastrian pedagogic text. 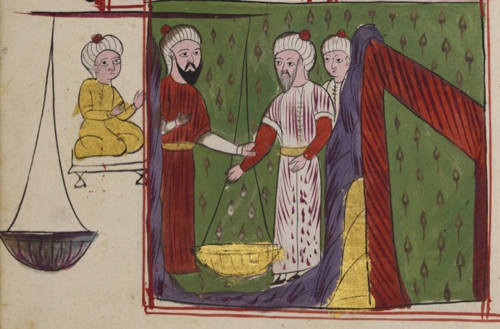 Arda Viraz with the divinities Srosh, Mihr and Rashn, the judge, at the Chinvat bridge, which the souls of the dead must cross. Traditionally, if a soul’s good deeds outweigh the bad it is met by a beautiful woman (actually an embodiment of the deceased's life on earth), the bridge is broad and it can easily cross on its way to paradise; if not, the bridge becomes narrow, the soul encounters an ugly hag and falls into hell.
Rylands Persian MS 41, f.12r.  Reproduced by courtesy of the University Librarian and Director, The John Rylands Library, The University of Manchester

The two manuscripts in ‘The Everlasting Flame’ are copies of a popular Persian version composed in verse in Iran at the end of the 13th century by Zartosht Bahram Pazhdu. The British Library’s manuscript (Reg.16.B.1) was copied in India and dates from the late 17th century. Although the text is in the Persian language, it was copied line by line in both Persian and Avestan (old Iranian) scripts, reflecting a tradition of transcribing Zoroastrian texts in a ‘Zoroastrian’ (i.e. Avestan) script. The manuscript was acquired for the orientalist Thomas Hyde (1636-1703) who used it as a means of deciphering the previously undeciphered Avestan script. 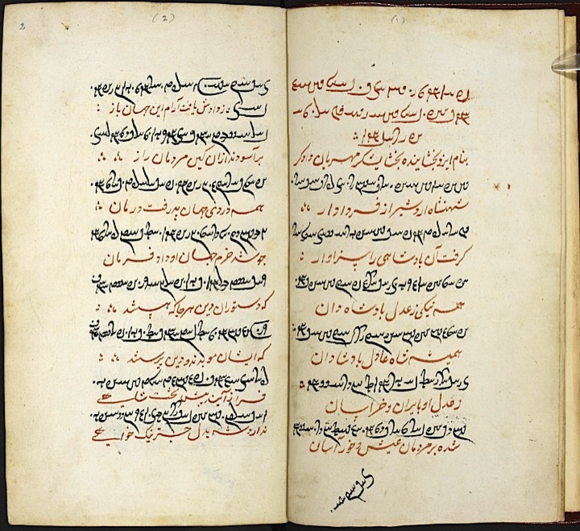 The second copy on display (John Rylands Persian MS 41) contains 60 illustrations which vividly depict the rewards and punishments awarded after death. The scene below describes happy souls in a sweet smelling garden in paradise where birds sing, golden fishes swim and musicians perform. On enquiring how they earned such a reward, Arda Viraf is told that, while living, they killed frogs, scorpions, snakes, ants and other evil creatures (khrastar and hasharat)– one of the most meritorious actions a good Zoroastrian could perform. 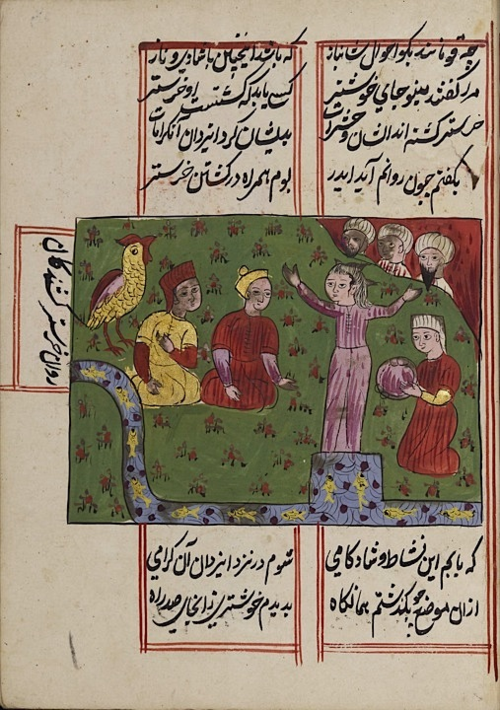 A scene in paradise. Rylands Persian MS 41, f.26r.
Reproduced by courtesy of the University Librarian and Director, The John Rylands Library, The University of Manchester

In contrast, more than half of the illustrations in this manuscript depict the gruesome punishments in store for those judged deficient at the Chinvat Bridge. These were to some extent tailored to the crimes committed on earth; for example the man who had butchered believers was punished by being flayed alive, another who had overindulged and not given food to the poor was starved until forced to eat his own arms out of hunger. Punishments were meted out by demonic creatures, mostly consisting of those same evil scorpions, snakes and reptiles which good Zoroastrians were encouraged to destroy. 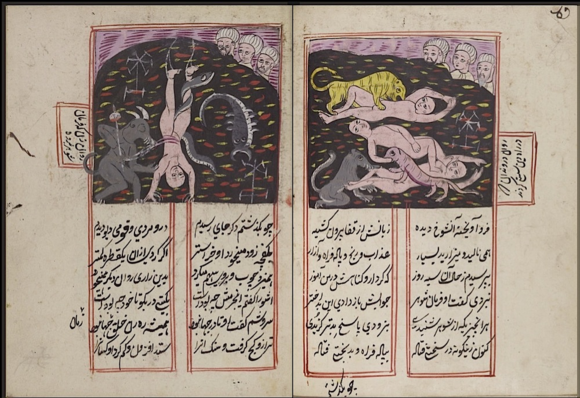 On the right: sinners who neglected to wear the sacred girdle (kusti) and were slack in matters of religious ritual are being eaten by demonic animals. On the left: a woman is hung upside down and tormented. Her crime was to disobey her husband and argue with him.
Rylands Persian MS 41. ff 47v-48r.  Reproduced by courtesy of the University Librarian and Director, The John Rylands Library, The University of Manchester

This manuscript was copied in July 1789 in Navsari, Gujarat, by a Zoroastrian, Peshotan Jiv Hirji Homji. It was brought to England at the end of the 18th century by a collector Samuel Guise, a surgeon working for the East India Company at its factory in Surat. Guise’s collection caused quite a stir in the literary world, being mentioned in journals such as The Edinburgh Magazine and the British Critic (Sims-Williams, p.200). The orientalist William Ouseley reproduced the illustration of the disobedient wife in his Oriental Collections published in 1798. After Guise’s death in 1811, his collection was sold. Most of his Zoroastrian manuscripts were acquired by the East India Company Library (now at the British Library) but this manuscript was purchased by the Persian scholar, John Haddon Hindley. Eventually it was bought by Alexander Lindsay, 25th Earl of Crawford, from the estate of another Persian scholar, Nathaniel Bland and is now in the John Rylands Library, University of Manchester. It has recently been digitised and images of the entire work can be seen at https://luna.manchester.ac.uk/luna/servlet/s/x263o9. 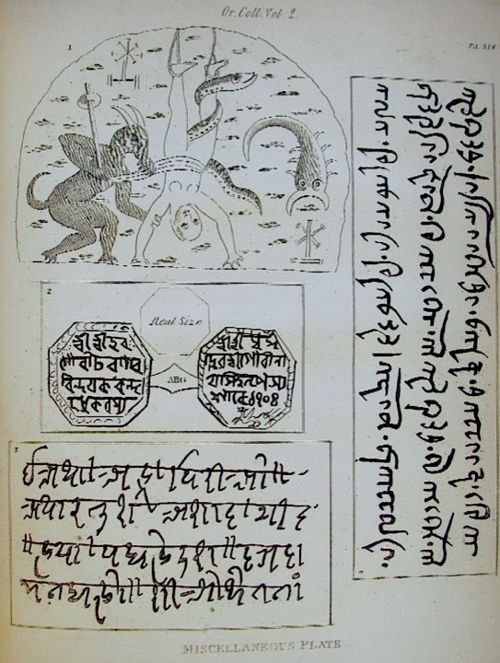 Posted by Ursula Sims-Williams at 7:00 AM

Frightfully mean of them to reward people for killing frogs, snakes, scorpions, and ants. I can sort of understand why snakes and scorpions might have been considered a menace (they bite or sting you), but frogs and ants? I hope modern Zoroastrians don't believe this too. - Not to mention the punishment meted out to wives who argue with their husbands!

I'm happy to say that killing frogs and ants is not an issue among Zoroastrians today!