A prodigal Balinese manuscript leaf is reunited with its family

In 1970 the British Museum purchased a small illustrated Balinese palm leaf manuscript from a vendor, who last week – nearly 44 years later! – contacted the British Library to say “As a matter of fact the MS was missing a page, because I had given it to my then girlfriend.  Recently I saw her again, and she returned the page, which I think ought to be reunited with the whole.”  And so last Wednesday I met Clive Sinclair, renowned author (his latest book, Death & Texas will be published in London next month by Peter Halban) and in fact no stranger to the British Library, where he was Penguin Writers Fellow in 1996.  In the course of sorting out his literary archive, which has been acquired by the Lilly Library at Indiana University, Clive had rediscovered the palm leaf folio and, very generously, resolved to bring it back into the fold of its family. 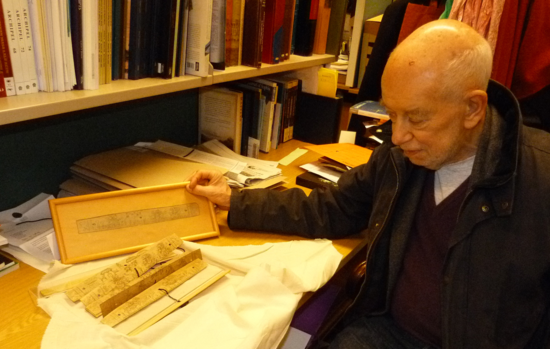 Clive Sinclair with the Balinese palm leaf (lontar) manuscript of Sutasoma Kakawin (Or.13277), together with the framed fourth folio, now reunited with its siblings.  Photo by A.T. Gallop, 15.1.2014.

Clive Sinclair had bought the manuscript, at the time described as a ‘Chinese book’, in Telegraph Avenue, Berkeley, California, in early 1970.  The manuscript originally consisted of eight numbered palm leaves with illustrations – incised with a sharp knife and then inked with black ink – on one side, and brief explanations in Balinese on the reverse, between two bamboo covers.  The fourth leaf was given to his girlfriend, who had it framed as an artwork in its own right.  It subsequently travelled with her to Australia and on to South Africa, before coming back to London only recently.

The seven leaves acquired by the British Library in July 1970 were given the shelfmark Or.13277.  The manuscript – which was probably written within a few decades of its purchase – narrates an episode from the Balinese version of the Sutasoma Kakawin, an Old Javanese Buddhist court poem perhaps dating from the 14th century, remotely related to the Maha-sutasoma-jataka.  The illustrations depict the arrival of Prince Sutasoma on the island Gili Mas [Small Gold Isle] in a lake at Benares, to wed the Princess Candravati, sister of King Dasabahu.  Archived correspondence shows that the then Keeper of the Department of Oriental Manuscripts and Printed Books of the British Museum, Dr G.E. Marrison, had enthusiastically set about getting the greatest experts in Balinese literature to work on the manuscript.  He first contacted Dr C. Hooykaas, Reader in Old Javanese at the School of Oriental and African Studies, who in 1968 had published a facsimile edition of the British Museum’s finest illustrated Balinese manuscript, Bagus Umbara (Or. 12579).  Hooykaas in turn had consulted Prof. Ensink of Groningen, an expert on the Sutasoma story, and eventually sent Marrison in August 1970 a full reading of the Balinese text found on each leaf, together with an English translation.  As these notes do not appear ever to have been published, they are presented here alongside a picture of each illustrated leaf, together with an image of the reverse of the first leaf to show the Balinese writing.

Or. 13277, f.4r.  This is the well-travelled leaf, now restored to its correct position in the manuscript.  Although the text on the reverse has not yet been read, the scene evidently shows the crocodiles of f.3 in their guise as monsters.

C. Hooykaas, Bagus Umbarara, Prince of Koripan.  The story of a Prince of Bali and a Princess of Java, illustrated on palm leaves by a Balinese artist, with Balinese text and English translation.  [Or. 12579].  London: British Museum, 1968.

Posted by Annabel Gallop at 3:12 PM