31 January 2014 is the first day of the Year of the Horse, according to the traditional lunisolar Chinese Calendar.  According to this system years are counted in a series of sixty-year cycles, each identified by a combination of two Chinese characters – the first from a cycle of ten known as the Heavenly Stems representing the elements – wood, fire, earth, metal and water, the second from a cycle of twelve known as the Earthly Branches represented by animals: rat, ox, tiger, rabbit, dragon, snake, horse, goat, monkey, cock, dog and pig.

People born in each of these years are traditionally believed to display particular characteristics –those born in the Year of the Horse, for example, are said to be passionate, talented, adventurous and independent but also self-centred and headstrong.

The Chinese Calendar was widely used in East and at various times was adopted in Japan, Korea, Tibet and Vietnam. In all these cultures the horse had a prominent role in practical life and was widely depicted in art. 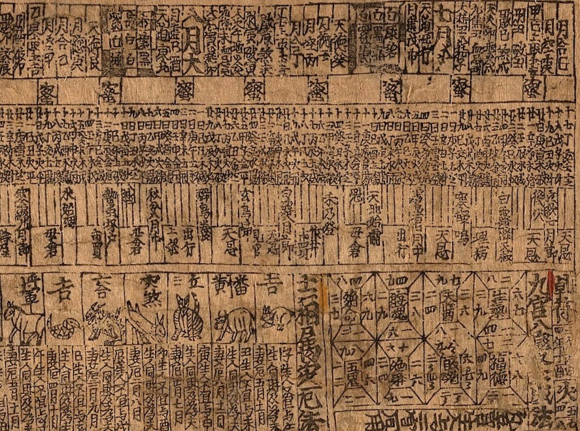 Part of a printed almanac from Dunhuang dating from AD 877. Babylonian, Persian and Indian influences can be seen including the animal zodiac. (Or.8210/P.6)

In Chinese culture the horse is an animal that represents health and persistence and the written character for horse 馬 mǎ is found in many metaphors and idioms related to fortune and well-being.  For example, 千里馬 qiān lǐ mǎ (literally: 10,000-mile horse) is a metaphor used for talented people and 馬到成功 mǎ dào chéng gōng (literally: riding to success) is used to wish someone good fortune.

In pre-modern Japan the horse was highly prized by the warrior class and horsemanship was one of the key skills of the Samurai.  The image below is taken from Riō busshoku zusetsu ‘An illustrated explanation of the selection of strong horses and cows’ (Or.15562), an album dated 1647 depicting 97 horses and 14 cows, with anatomical annotations, by Kurosawa Sekisai 黒澤石齋 (1622-1678), an expert adviser on horses to the Tokugawa Shogunate.

A selection of different kinds of horses from the Japanese Riō busshoku zusetsu (Or.15562)

Although the Chinese calendar is not widely used in Thailand, the zodiac is important for fortune-telling. According to Thai horoscopes, people born in the year of the horse almost always achieve prosperity and wealth during their lifetime. They are often successful, but not always kind-hearted. They have to be careful in their thirties, sixties and eighties as there are certain years in which they can face danger or even death. It is important at these times to make much merit (in the Buddhist sense). 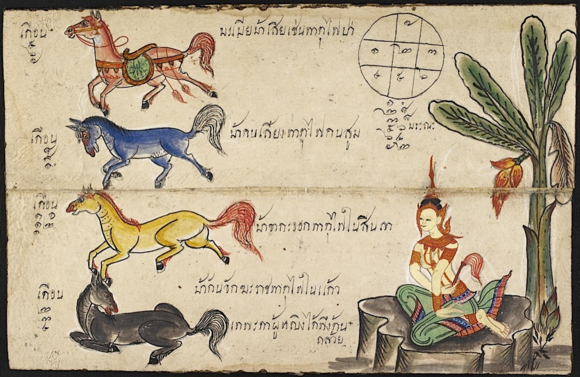 Curators of the East Asian Section, Asian and African Studies

Posted by Ursula Sims-Williams at 5:58 PM