Pahari Paintings at the British Library

The collection of Indian paintings in the former India Office Library’s Prints and Drawings section (now British Library Visual Arts) is famous above all for its individual imperial Mughal and later Mughal paintings, forming a complement to the collection of illustrated Mughal manuscripts that came to the British Library from the British Museum’s collections.  Not so well known are the individual items from other schools of Indian painting, particularly the Rajasthani and Pahari paintings.  The collection of Pahari paintings was very small when described by Toby Falk and Mildred Archer for their seminal 1981 catalogue, and it still is, but this post will pick out the highlights of what was in the collection in 1981 and the paintings acquired subsequently.

We begin with four paintings acquired since the publication of the 1981 catalogue showing the Pahari style in its early form little influenced by Mughal painting. 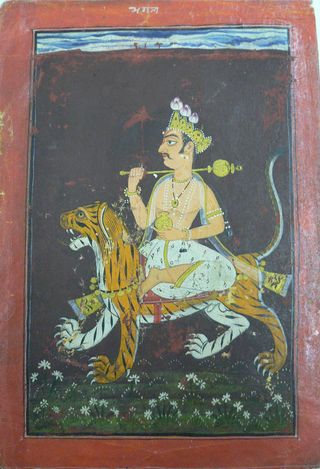 Mangala wears a lotus-topped crown, a sprigged dhoti, and a muslin dupatta with flowered ends, and rides facing left on a snarling orange and white tiger.  The ground is a dark red, with a narrow band of cloud-streaked sky at the top and another of green at the bottom; the latter is lightly applied over the dark red ground, and is relieved by clumps of white daisies.  Inscribed above in white takri characters is the name Magala and on the verso is a verse detailing the consequences good or evil of seeing the planet, indicating the painting comes from a dream manual.  The iconography is unusual, since Mangala normally rides a goat. The composition is typical of early Pahari painting with the subject silhouetted against a coloured ground with flowers below and a sky above, but without any indication of space or spatial recession.  Although acquired as from Chamba, subsequent research by Goswamy and Fischer (1992, pp. 95-125) suggests Mankot as a more likely school and possibly from the hand of the artist they designate the ‘Master at the Court of Mankot’.   Our Mangala can be compared with that master’s image of Rama being worshipped by Hanuman in the Rietberg Museum (ibid., no. 52), while the tiger with its fearsome claws is close to that master’s tiger in Vasudeva crossing the Jumna with the infant Krishna in a painting now in Chandigarh (ibid., no. 43). 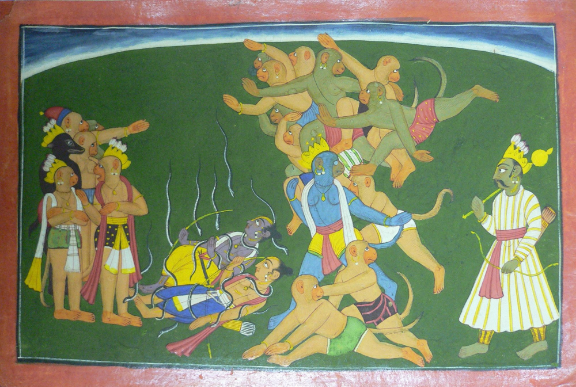 The Shangri Ramayana series is one of the most hotly disputed topics in Pahari painting.  A large part of this loose-leaf series is in the National Museum, New Delhi, but many paintings are also dispersed.  When it was first analysed by W.G. Archer (1973, pp. 325-29), he thought it was prepared at Kulu and discerned four separate styles between 1690 and 1710.  B.N. Goswamy and E. Fischer (1992, pp. 76-91) moved the first two styles to Bahu, an offshoot of Jammu, but this unfortunately left the last two styles in an artistic limbo, since they have absolutely nothing in common with either Bahu or Jammu paintings, and much further research is needed to resolve this.  Wherever it comes from, style III with its wonderfully human monkeys is one of the most exuberant and charming of all the Pahari styles.

Our page is from Book 6, the Yuddhakanda or Lankakanda (Book of Battles or Lanka), of the Ramayana, canto 49.  Ravana's terrifying magician son Indrajit, who has the power to make himself invisible, has successfully ensnared Rama and Laksmana in serpentine coils so that they cannot move and lie on the ground unconscious, their eyes rolled up. On the left stands the monkey king Sugriva who is seeking advice from his nephew Angada and the king of the bears Jambavan as to what to do.  All the other monkeys, including the blue crowned monkey general Nila, are terrified when they see Vibhisana, Ravana's brother, advancing on them with his club.  Vibhisana had previously abandoned his doomed brother and had come over to Rama's side, but the monkeys mistake him for the invisible Indrajit and run away in terror.

This particular artist has a peculiar trick of perspective.  The monkeys are not climbing up over each other in order to escape but are actually in a receding line:  other paintings by this artist show him resolving perspective issues of one person or monkey behind another in the same individual way.  The artist is trying to adjust his inherited style to include depth but he lacks awareness of how to do it.

This archaic style continued in use in several Pahari court styles until late in the 18th century, even after other styles were becoming increasingly influenced by Mughal painting from the court of Muhammad Shah (reg. 1719-48). 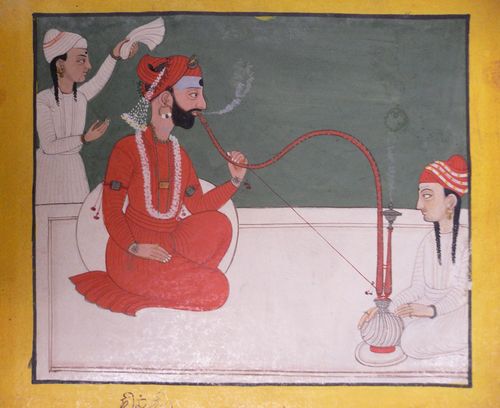 Raja Shamsher Sen of Mandi is kneeling on a terrace and much enjoying the fragrant smoke from a hookah.  The artist shows the tobacco smoke rising from the hookah’s burning pan before some is drawn down and through the rosewater in the body of the hookah and then emerging from the raja’s mouth.  He is accompanied by a young attendant waving a white cloth (one of the insignia of royalty) and by another tending the hookah, both wearing the long dreadlocks fashionable at the time among young men.  Portraits of rulers sitting on terraces had by this time become standard throughout the various schools of Indian painting, but in Mandi no concession is made to depicting space even though the terrace is now separated from the plain ground beyond.  Shamsher Sen, who inherited the throne from his grandfather, the formidable Sidh Sen at the age of five, was by all accounts a fairly weak and superstitious character and his numerous portraits suggest this. 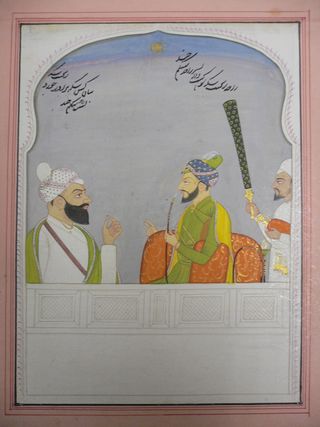 Court artists in Kangra were commissioned to produce a large series of portraits of neighbouring rulers from early in the reign of Sansar Chand (reg. 1775-1823) (Archer 1973, vol. 2, pp. 196-97).  In this portrait, set within a jharoka or window frame, Ranjit Singh reclines against a red bolster and smokes from his hookah.  On the left, his brother Kishan Singh is pictured facing Ranjit Singh.  His figure is much larger in proportion to his brother, no doubt because Kishan Singh was in fact Sansar Chand’s father-in-law.   On the right, an attendant waves a morchhal (peacock-feather fan, another of the insignia of royalty) with his right hand and holds the hilt of a wrapped-up sword in his left.  Although Kangra painting has become synonymous with a naturalistic, elegant and gracious style (see below), this was not the case with its portraiture which even later than this preserved an archaic and hieratic approach. 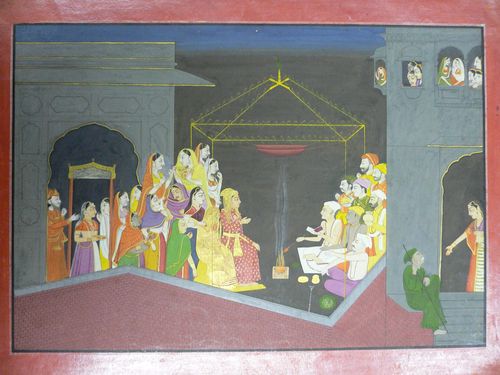 Signs of change first became apparent in Pahari painting in 1730, with the Guler artist Manaku’s Gita Govinda (Lahore and Chandigarh Museums, and dispersed).  He and his brother Nainsukh were both exposed to contemporary Mughal painting and in their different ways in the period 1730-60 introduced stylistic change into the painting of the hills, softening the jagged outlines, moderating the fierce colours, and giving solidity to their figures and depth to their compositions.  The two brothers had six sons between them.  All of them followed the family profession and introduced the new style to the various court studios of the hills.

A page from what is now called the large Guler-Basohli Bhagavata Purana was acquired in 1960, when 200 or so individual paintings from the set from the collection of Mrs F.C. Smith were dispersed at auction.  This dispersed series of the Bhagavata Purana is one of the most important achievements of Pahari artists and the most influential in determining the development of Pahari painting at Guler and Kangra in the illustration of poetical Vaishnava texts.  It is also among the most controversial, although most authorities agree that Manaku’s son Fattu had a hand in it.

Pahari artists introduced depth into their compositions by raising the viewpoint, so that figures could be depicted one behind the other in some kind of believable spatial setting.  That this did not come naturally to them is suggested by the somewhat awkward wall zigzagging across the picture plane, a feature of quite a few paintings from this series.  Within the high walls of the palace at Mathura and under the night sky, Vasudeva and Devaki, the future parents of Krishna, are married.  They wear the traditional marriage costumes, while the priests facing them add ghee to the sacred fire and chant the Vedic mantras.  They sit side by side beneath a canopy decorated with parakeets. Household ladies and other priests are gathered on either side, while women at the palace windows above look down on the scene or chatter among themselves. 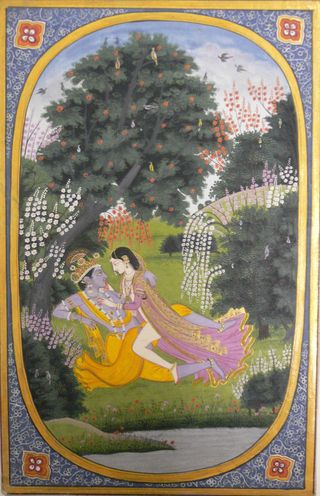 Some of the great masterpieces of the new style were produced for Sansar Chand of Kangra early in his reign, including now dispersed series of the Gita Govinda, Bhagavata Purana and Ramayana.  Sansar Chand at the age of 20 in 1786 set out to make himself the preeminent chief in the hills and was indeed so by 1806, with most of the rajas paying him tribute.  In that year occurred the disastrous Gurkha invasions from Nepal when Kangra was overrun and Sansar Chand was forced to appeal to Maharaja Ranjit Singh of the Punjab for assistance.  It was granted and the Gurkhas were expelled by 1809, but at the price of Sansar Chand having from then on to release the other states from paying tribute and indeed having to pay tribute himself to the Lahore court.

Sansar Chand from then on lived more in retirement, but still commissioning paintings.  The first flush of brilliance in the style had passed and was replaced by a more mannered but still lyrical elegance.   Typical of this period is a very large dispersed series from around 1820 illustrating the Hindi text on poetics, the Rasikapriya, by Keshav Das.  This work classifies the various types of heroines and their lovers and proved irresistible to patrons and artists alike as a way of combining sringara rasa, the erotic sentiment of classical poetic theory, with the bhakti movement of personal devotion to Krishna, since the lover in the pictures was often identified with Krishna himself.  Goswamy and Fischer now attribute the series to the artist Purkhu with assistants (2011).

The painting illustrates the verse 1.20, prachanna-samyoga-sringara (‘hidden love in union’):

‘One day Vrishabhanu’s daughter [Radha] and Murari [Krishna] decided to hide in the forest and engage in reverse love  play.  Fully immersed in each other and groaning with pleasure they were fully enjoying each other.  During the amorous acitivity Radha’ sapphire-studded pendant tied round her neck with a black thread was moving and it seemed as Surya and Saturn were swinging’ (translated Harsha Dehejia, 2013).

In our painting in a blossoming grove by a pool, Radha, wearing a flowing pink gown, makes love to Krishna who dressed in saffron lies beneath her.   Sansar Chand was visited in 1820 by the traveller William Moorcroft whose manuscript journals and letters are in the British Library and quoted extensively by Archer (1973) for his assessment of Sansar Chand and his patronage of artists:  ‘He is fond of drawing, keeps several artists who execute the minute parts with great fidelity but are almost wholly ignorant of perspective.  His collection of drawings is very great … Many subjects from the Mahabharut are given in details, some of which for decency’s sake might have been spared, yet there were few of the latter description’ (MSS Eur D241, f. 67, quoted Archer 1973, vol. 1, pp. 262-63).

Archer, Mildred, Indian Miniatures and Folk Painting from the Collection of Mildred and W.G. Archer, London, 1967